The U.K. vs. U.S. Detective Debate 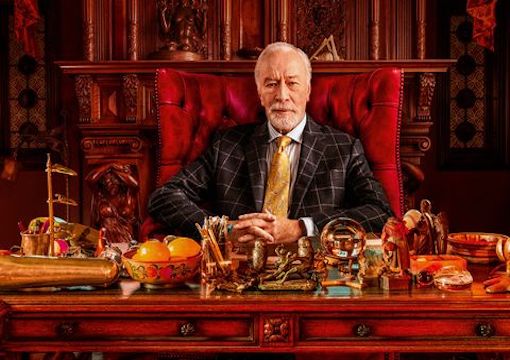 The mystery movie Knives Out is an allegory about how Americans deserve to lose our homeland to Latin American immigrants out of our self-destructive hatred for each other. But that’s a good thing, the film says, because Latin Americans are so much nicer than we are.

Which is probably not an opinion you’d arrive at if you knew much about the history or sociology of Latin America… But, after all, who pays attention to Latin America? Thus, in Knives Out, the unlikable rich white American scions (Chris Evans of Captain America, Michael Shannon of The Shape of Water, Don Johnson of Miami Vice, and Jamie Lee Curtis of Halloween) can’t remember whether the young nurse of their self-made father (Christopher Plummer of The Sound of Music) is from Bolivia or Ecuador.

So it’s only fitting that, after the millionaire mystery writer is found with his throat slashed, the immigrant inherits his huge (but ugly) mansion.

The one-dimensional “kindhearted” nurse is played by the exquisite Cuban-Spanish actress Ana de Armas, who was Ryan Gosling’s holographic girlfriend in Blade Runner 2049. De Armas is considerably more Visigothic-looking than the typical Latina immigrant, or even than the Swedish starlet Alicia Vikander, who portrayed the cyborg girlfriend in Ex Machina.

Inheritances provided many of the plot twists in 19th-century novels, such as those of Dickens. But over time, American fiction came to endorse the notion of the self-made man, so the interesting topic of patrimonies has largely been shrouded in cultural silence. Offhand, I can’t recall a modern movie sympathetic to would-be heirs.

In reality, of course, wills probably play a bigger role in American life at present than at any point since World War II. The first $11.4 million of an individual’s estate is currently tax-free, so less than 2,000 estates per year are hit by the death tax. Legacies now comprise a large part in what keeps the upper middle class upper.

And extended life spans have sometimes made waiting for a bequest an even longer process. For example, the lady across the street from me recently died at age 101, finally leaving her house to her 75-year-old daughter, who immediately sold it for the money. (Our culture is lately full of complaints about baby boomers hogging all the wealth, but in this case, even the heir is a pre-boomer born during WWII.)

Yet, the whole topic of birthright has come to be considered in bad taste to discuss.

This cultural amnesia likely contributes to the current conventional wisdom on immigration policy, of which Knives Out is a representative example, which prizes foreign newcomers over what the now-forgotten Preamble calls “our posterity.”

As lazy and cliché-ridden as Knives Out’s politics might be, it could still be a good movie. Is it?

That depends upon whether you like English country-house murder mysteries with stylized dilettante detectives such as Dorothy Sayers’ Lord Peter Wimsey. (In Knives Out, Daniel Craig of the James Bond movies plays Southern-accented Benoit Blanc, “the last of the gentleman detectives.”)

My tastes incline to the hard-boiled American school of Dashiell Hammett and Raymond Chandler rather than the more contrived English tradition of Sayers and Agatha Christie.

Interestingly, Knives Out’s American director, Rian Johnson, might feel the same. Johnson made in 2005 the extraordinary low-budget Brick, the most innovative addition to the Hammett-Chandler film-noir canon since The Big Lebowski. It starred Joseph Gordon-Levitt as a high school student who is a private eye.

Brick was preposterous, but it had style. Since then, Johnson’s movies have gotten even sillier but less cool. In his 2012 science fiction Looper, Johnson had Gordon-Levitt and Bruce Willis, Hollywood’s two least similar-looking leading men, play the same character, for reasons.

And let’s not talk about The Last Jedi.

As Chandler sourly complained of Christie’s elaborately contrived ending to Murder on the Orient Express, “This is the type that is guaranteed to knock the keenest mind for a loop. Only a halfwit could guess it.”

(Ironically, despite Chandler’s central role in the English vs. American detective debate, he was actually an Anglo-American. He graduated from the same English boarding school, Dulwich, as his fellow master of metaphor P.G. Wodehouse, and, like Wodehouse, split much of his life between the U.K. and the U.S. Chandler’s hero Philip Marlowe, like Wodehouse’s Bertie and Jeeves, benefited from a combination of English literary refinement and American commercial energy.)

Like Chandler, I don’t much care about solving fictional murder mysteries. For Chandler, the plot was essentially an excuse for his exercises in aesthetics. While working on The Big Sleep, the filmmakers famously got lost trying to make sense of the story. Either director Howard Hawks or screenwriter William Faulkner, according to your pick of legend, called up Chandler to ask who killed the chauffeur in his novel. Chandler admitted that he didn’t know either.

But not everybody agrees with Chandler and me on the tediousness of murder mysteries. In other words, even though I was brutally bored throughout Knives Out, you might like it.

It has a few good things going for it, such as an initial setup that sounds promising. Christopher Plummer plays a genius best-selling mystery author who calls his less talented descendants, all of whom live off his immense royalties, together to celebrate his 85th birthday, where he intends to disinherit each of them.

Plummer, who was Captain von Trapp to Julie Andrews’ Maria in 1965, is one of the few actors ever cast to play an 85-year-old when he was significantly older: He turns 90 this week.

He wasn’t very good in The Sound of Music 54 years ago, but outliving your critics could be the best revenge. Remarkably, Plummer may have enjoyed the greatest octogenarian decade in movie acting history, having earned his first three Oscar nominations in his 80s. That’s three of the eight-ever age 80-plus Best Supporting Actor nominations. The others have been Robert Duvall, Hal Holbrook, Max von Sydow, Ralph Richardson, and George Burns, which isn’t bad company.

Plummer’s ancestry is about as distinguished as Canadians get, including a prime minister, various Bethunes, and a Featherstonhaugh (which is famously pronounced FAN-shaw) who was “the owner of one of the first electric cars in Canada.”

Two years ago, when Kevin Spacey got #MeToo’d out of playing zillionaire John Paul Getty after Ridley Scott had already wrapped All the Money in the World, Plummer was called in at the last possible moment and saved the film.

So, Knives Out starts with the greatest old actor of our era in domineering form as a master of devious invention. Unfortunately, Johnson can’t come up with a likely plot twist for such a compelling character and instead immediately kills him, and his movie, off.