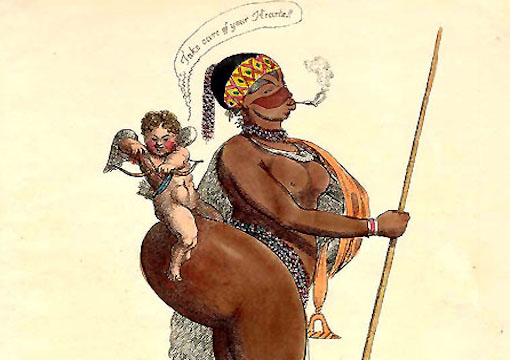 The Week’s Most Chiding, Abiding, and Yuletiding Headlines

THE BAD PARENT-HOOD
Tiny tots with their eyes all aglow…with murderousness!

Last week in Garden Grove, Calif., a youth basketball game was disrupted when one of the player’s mamas, Latira Shonty-Hunt (of the Orange County Shonty-Hunts), instructed her thuggish daughter to sucker punch another player for an on-court infraction (to be fair, the Shonty-Hunt coat of arms depicts a gold-toothed gangbanger curb-stomping a child).

Turns out the punchy point guard’s dad is an actual NBA player, meaning that Latira Shonty-Hunt hit the jackpot in what’s known as the “NBA lottery” (that’s when the condom breaks during a one-night stand).

The sucker-puncher has been banned from the league, and Mom’s done got herself arrested for contributing to the delinquency of a minor.

She’ll likely face less time than James and Jennifer Crumbley, whose son Ethan went on a lethal shooting rampage at his Michigan high school two weeks ago. Immediately prior to the murders, 17-year-old Ethan had penned a plea for help, claiming that voices in his head were compelling him to shoot people: “Blood everywhere. The thoughts won’t stop. Help me.”

The Crumbleys’ solution? “This brand-new SIG Sauer will heal your troubled mind!”

Mamma Crumbley even tutored her son on how to buy ammo on a school computer “without getting caught.”

This isn’t a Second Amendment issue. It’s a “don’t give your youthful pyromaniac a can of gasoline and matches” issue. If your child is a shadowy lurking schizo nutbag, best to keep the guns ’n’ ammo locked up.

Like Shonty-Hunt, the Crumbleys will be spending Christmas behind bars…making the season just a little merrier for everyone else in their community.

HARRY POTTER AND THE PRISONER OF INSTABAN
J.K. Rowling poses a conundrum for new Twitter CEO JubJub Hindibindi (disclaimer: name may need to be fact-checked). Normally, anyone who claims that men aren’t women is immediately banned from the platform. And Rowling, one of the most successful authors of her era, is an ardent believer in the reality of women. But banning her has proven difficult, perhaps because BudBudBud Sidewalksoiler (disclaimer: awaiting fact-check) isn’t keen on the resulting publicity should he ban someone of her stature for simply saying “women exist.”

Last week, this column brought you the story of a convicted rapist in Melbourne who sexually assaulted a woman in an alley, only to then claim to be a woman himself, prompting the Aussie press to label the crime a “female-on-female” catfight.

In Scotland, police have declared that from now on, any rapist who tells the cops “I’m a bonnie lass” will be officially classified as a woman and treated as such, even if the offending bloke possesses a penis (this used to be a way of telling men from women. How lucky we are that the West has progressed beyond such superstitions).

“Police Scotland requires no evidence or certification as proof of biological sex or gender identity other than a person’s self-declaration,” Detective Superintendent McAnus Fitzcretin (disclaimer…) told the Daily Mail. In response to the new directive, Rowling tweeted: “War is Peace. Freedom is Slavery. Ignorance is Strength. The Penised Individual Who Raped You Is a Woman.”

Needless to say, trannies took to Twitter to report that Rowling’s words had literally murdered them. The responses ranged from “Don’t claim that transwomen are rapists just because they have a penis and rape women,” to best-selling author Seth Abramson (oy!) explaining that the new policy is necessary because governments should not be “empowered” to “misgender” rapists.

As of now, Twitter CEO Deltavariant Brideburner (name 100% fact-checked) is allowing Rowling to remain on the platform.

How long this will continue is known only to that mystical collection of magical men in drag, the Order of the Penix.

“Yes, Europeans in 1850 paid money to stare at a giant dead ass on a stage, and it was still a better live show than Madonna.”

For some odd reason, the human-remains display is attracting controversy. While museum personnel stress that the purpose of the exhibit is to educate the public and show the deleterious effects on organs of things like smoking and alcohol, critics retort that many of the body parts were taken from cadavers without the consent of the deceased or their family.

According to Agence France-Presse, one of the biggest points of contention regarding the exhibition concerns the sordid history surrounding the remains of Saartjie Baartman, an African tribeswoman from the 1800s who had such a “generous” posterior that she was paraded around Europe as a medical curiosity, and when she died, her ass was literally preserved and taken on tour.

Yes, Europeans in 1850 paid money to stare at a giant dead ass on a stage, and it was still a better live show than Madonna.

Baartman’s rear ended up in a museum, sparking a fierce debate over the exploitation of nonwhite remains. Eulogizing Baartman following her death, the great orator Frederick Douglass is reported to have said, “Let us not look at this woman as lesser than, for we are all equal before the Almighty. Also, her booty so big when she go to the beach it becomes high tide. When she farts trailer parks blow over. Bitch be a walkin’ eclipse. Her booty so large it got its own congressman.”

In the 1970s, Baartman’s butt was returned to Africa, where it was used to plug up the Mount Nyiragongo volcano.

Vienna Natural History Museum curator Eduard Winter assured the AFP that the body parts currently on display at his institution are being handled with the greatest respect so that the museum doesn’t repeat the racist discourtesy that surrounded the treatment of Ms. Baartman’s remains.

He then added, “Her booty so big Hitler annexed it for lebensraum.”

THE VAXSUCKER PROXY
Here’s to entrepreneurship! A New Zealand man has launched a cottage industry aimed at locals who are reluctant to take the Covid vax or any of the—what are we up to now?—three, five, ten boosters (give it a year and there’ll be as many boosters as genders).

For a few dollarydoos, the industrious Kiwi would take shots for those reluctant to do so themselves. The New Zealand press has reported that the human pincushion reportedly took as many as ten “jabs” per day.

Astrid Koornneef, who is either the New Zealand Ministry of Health’s Covid-19 program manager or the item that nobody orders at a Scandinavian deli, told the press that the vaxxed-for-hire miscreant—whose name was not released but it’s almost certainly “Pokey”—has been detained. Meanwhile, Auckland University professor Nikki Turner of the Immunisation Advisory Centre cautioned that there’s no data regarding the effects on the human body of taking that many shots. “This is definitely not recommended…. [We] have no evidence as to what side effects somebody would have with this amount of vaccine.”

Auckland police had no problem identifying the suspect, as he’s fifteen feet tall with green hair, an elephant-man head, three legs, a tail, and seven arms.

New Zealand Hindus have already declared him their new god.

If you’re wondering how in New Zealand—a nation where even the barest essentials are denied to the unvaxxed and unmasked—a man could pull off the scam of taking jabs while masquerading as other people, it turns out that photo ID is not required to get a vax card because the government fears that requiring identification would prevent the nation’s “transients” from getting the shot (most New Zealand transients are actually midgets left behind after Peter Jackson filmed the Hobbit movies).

The Biden administration responded to the events in New Zealand by reminding the press that such vax proxy chicanery could never happen here because “in America, ID is essential to establishing who got the shot. Now as for voting, that’s another story…”

CELESTIALS ON THE MOON
The Chinese may not have put a man on the moon, but at least they can build a sweatshop there.

A Chinese lunar rover (the only kind of rover the Chinese don’t eat) has apparently discovered a cube-like structure on the moon’s surface. Dubbed the “mysterious house,” the object will remain unknown until the lander reaches it for closer inspection, which will take between two to three months because the Chinese space program is run on power generated by child laborers.

Some have theorized that the mystery object is just a square-shaped rock, but to the CCP, it doesn’t matter; if it can house a Nike factory, that’s all that counts.

On the off chance that the structure is filled with aliens, Joe Biden has already promised them H-1B visas and $450,000.

And speaking of the U.S., while public sector space exploration seems to have stalled at “If our astronauts aren’t trannies of color, we’re not interested,” Dr. Garry Nolan, professor of pathology at Stanford University, told Vice last week that based on MRIs, people who claim to have been abducted by UFOs have cranial scarring as a result of their abductions.

If you’re curious whether the good doctor considered an alternative, horse-before-cart scenario in which the brain disorders caused the victims to believe they were abducted, keep in mind that Dr. Nolan once claimed to have located a tiny alien skeleton in Chile…which turned out to be the bones of a very human midget.

Yet more proof of the environmental damage caused by Peter Jackson’s Hobbit films.

Dude, if you’re gonna litter the globe with midgets, please clean up after yourself.