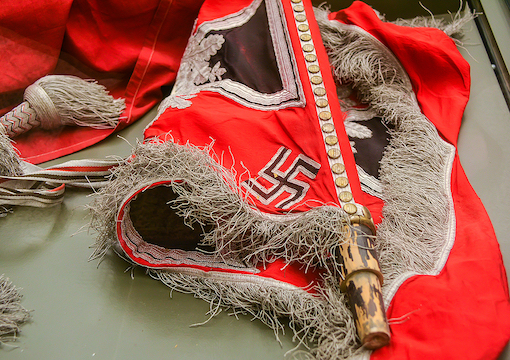 PUTIN OUT-TRUDEAUS TRUDEAU
The “Trudeau Doctrine” is very simple: If there’s even one Nazi flag at a peaceful protest, the entire protest is Nazi and must be dismantled by force, its participants imprisoned and impoverished. Never bother to find out who brought the flag or why. One flag = ruthless war of extermination against everyone present.

The Trudeau Doctrine has been lauded by U.S. leftists, who’ve long said that anything “Nazi” deserves to be punched, no questions asked.

So it’s rather surprising that Trudeau and the American left are angry at Putin for invading Ukraine. Putin made it quite clear in his Feb. 24 speech that he was only attacking in order to punch Nazis: “We will seek to denazify Ukraine,” to cleanse the nation of “far-right nationalists and neo-Nazis.”

This is some grade-A trolling. Putin, for his many faults, reads his enemies well (whereas Biden reads Where’s Waldo? not-so-well: “C’mon, man; where are ya?”). Western leftists have spent years pushing the line that the presence of even one “Nazi” in a thing means that the entire thing must be crushed, and all rights and rules suspended in the course of the task. And Western media has readily admitted the presence of Nazis in Ukraine (until last week, when it became a “manufactured claim”).

So there are Nazis that need punching.

Even the American right is doing its part, with Tucker Carlson agreeing that Putin’s Nazi-hunting is legit because during WWII Ukraine “collaborated with the Nazis” while the Russians “fought fascism.”

Putin may not be Sviatoslav Richter on the piano, but when it comes to playing Westerners, he’s a maestro.

TRANS-ATLANTIC
If Putin isn’t expecting much in the way of retaliation from the West beyond a few limp-wristed hisses from government-funded drag queens (“boo, Pu, your invasion is borrr-rrring!”), he can hardly be blamed for that belief. After all, the West’s been on a decades-long mission of sissyfication and self-emasculation.

But in the U.K., that tide may be turning. Last week Boris Johnson’s Education Secretary Nadhim Zahawi (Iraqi-raised, so he wasn’t indoctrinated to become Eddie Izzard) announced a new set of rules to “de-woke” public education.

Under the new guidelines, teachers are forbidden from pushing BLM propaganda and critical race theory. Teachers are also prohibited from portraying historical figures like Winston Churchill as “white oppressors” whose entire lives are defined by that time they dared to tell a diaper-clad wog, “You ain’t a betta man than I am.”

The goal is to reclaim the British educational system from fanatical leftists who seek to create generations of Brits who hate their homeland.

Across the Atlantic, U.S. teachers don’t have to contend with Nadhim Zahawi. Last week teachers in California debuted their latest advancement in educational technology: the “transition closet,” a cabinet filled with bras, dresses, and wigs that will be installed in schools. Boys will be instructed to enter the closet as male and come out as female, because teachers are some sick SOBs.

“Putin may not be Sviatoslav Richter on the piano, but when it comes to playing Westerners, he’s a maestro.”

Still, all might not be lost. The originator of the “trans closet,” who goes by the online name “@justaqueerteacher,” has agreed to donate several hundred of his magic tranny boxes to the Ukrainian war effort. Vodka will be used as bait to entice Russian soldiers to enter, and the hope is they’ll emerge as ladies after getting plastered and discovering their inner Catherine the Great.

Might it work? Is it possible that trannies will save Ukraine?

FROZEN STIFF
President Xi sits in his palatial office, a photo of Mao (with eyes that follow you across the room) over one shoulder, a velvet painting of LeBron James in a Speedo over the other.

Xi: “Yes. Tell me, what is world opinion of our Winter Olympics?”

Aide: “Do you want the feel-good answer, or the one that will get me shot?”

Aide: “Well…it’s being called the worst Olympics ever. The opening ceremony attracted a mere 14 million viewers, compared to 112 million who watched the American Super Bowl the same week. There was a doping scandal, weeping teen girl skaters berated on camera, complaints about the shabbiness of our Olympic Village, athlete malnourishment, midnight MSS raids, Covid outbreaks, and abysmal weather. Basically, the world couldn’t wait for it to be over.”

Xi: [Stroking his chin in contemplation] “I will spare your life, because as bad as the news is, it could’ve been worse. At least no athlete had his penis frozen solid.”

Aide: “Uh…please tell my wife I love her.”

In an Olympic first, Finnish cross-country skier Remi Lindholm nearly became a reluctant tranny when his “pole” froze during his final race. Intense windchill had so alarmed Olympic officials that the course was shortened from 50km to 20km.

Frostbite was the main concern.

But, you know, of fingers and such.

Sadly for Lindholm, Jack Front came nipping, but not for a nose. Lindholm’s, shall we say, “Mannerheim” was frozen solid during the race.

On the bright side, medics were able to thaw out his creamsicle, a painful process that shattered the stereotype of Finns as stoic. Word has it Lindholm’s screams were so loud, a Uyghur in a faraway gulag heard them and said, “Wow, I thought we had it bad.”

Lindholm finished 28th, a terrible showing under normal conditions but gold-medal-level for someone whose privates were cryogenically preserved without his consent.

HARVARD JARRED
Remote learning caused a multitude of problems for America’s students, but nobody suffered more than academia’s hate-crime hoaxers. These doughty individuals, dedicated to rooting out America’s Klansmen by pretending to be Klansmen and then rooting themselves out, had a terrible time during school closures. When you’re on a Zoom call with your class, it’s hard to hide the fact that you’re the one who just took a Sharpie and drew “blackie go home!” on your living-room wall.

You can’t tell blackie to go home when blackie is home.

With in-person learning now the norm again, hate-crime hoaxers are making up for lost time. Last week, we covered a hoax in which a black Southern Illinois University student taped “blackie go home” notes to her own dorm-room door, falsely accusing two white students of the offense.

Only days after that hoax was exposed, a black female student at McClatchy High School in Sacramento scrawled Jim Crow-era graffiti around campus, writing “black” and “white” over the school’s drinking fountains (Sacramento was, of course, the heart of the Confederacy). The young rapscallion was caught thanks to security cameras, but local black activists, not wanting to give up the dream, refused to accept the evidence, preferring instead to blame Bull Connor’s shape-shifting ghost.

And at Harvard, Michael Cheng, president of the Undergraduate Council, claimed to have found anti-Asian notes taped to his dorm door (Cheng didn’t say exactly what was on the notes, but it was most likely “blackie go home” with “blackie” crossed out and “chinky” written above).

When the council drafted a statement in support of its victimized president, Cheng rebuked the statement, because in the recent Undergraduate Council presidential election several members had backed a different candidate. That makes them as evil as whoever wrote the note, Cheng told The Harvard Crimson.

So not supporting an Asian who runs for office is now as bad as writing a racist hate note.

How much do parents pay to send their kids to Harvard?

When asked by the Crimson if it’s possible that he himself wrote the notes as a way of getting revenge against the council members who refused to back him in the election, Cheng’s eyes darted nervously side to side as an Oriental gong sounded in the background.

Humiliating and vomiting on preteens.

Hey—is it any worse than what Biden would do to them?

Last week, Broyles visited a friend for a night of wine-drinking and girl talk.

The friend’s middle school daughter happened to be hosting a sleepover that same evening.

What could go wrong?

Apparently, everything. Broyles got so drunk, she began belittling and abusing the girls, hurling racial epithets and saying things one running for office shouldn’t say to children.

According to the NY Post, Broyles called one girl an “acne fucker,” and another a “Hispanic fucker.” When Broyles spilled wine on a girl’s blanket and the child asked for a dry one, Broyles called her a “judgy fucker.”

Then Broyles began projectile-vomiting, first in a laundry basket, then on the girls’ shoes.

Understandably, the parents were not pleased when they came to pick up their children in the morning. Several went to the press. And Broyles flatly told reporters that she’d never even been to the house: “I’ve been out of town on a fundraising trip. I don’t know these women and I don’t know what is behind this, but it’s just not true.”

When confronted with the fact that she’d recorded a TikTok video with the girls that night while in her “not-yet-abusive” drunk phase, Broyles admitted that yes, she’d been to the house, but someone drugged her and forced her to hurl insults at the children.

And she spun that yarn with a straight face.

Forget Congress; put her on SCOTUS!