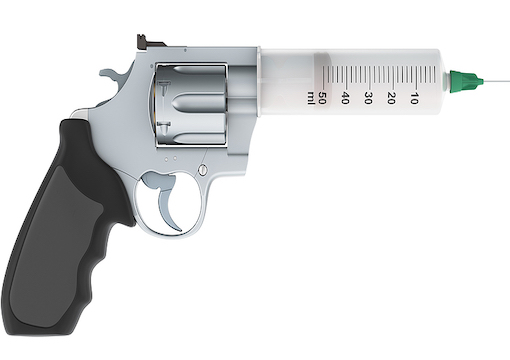 The Week’s Most Staid, Unmade, and Labor Day’d Headlines

ECCE HOMA
You let one black cannibal killer go free, and folks never let you live it down.

In 2021, Oklahoma governor Kevin Stitt commuted the sentence of cannibal-murderer Lawrence Anderson (a.k.a. Panhandibal Lecter), who repaid the favor by killing and eating a whole bunch of folks. Thanks to Lawrence’s all-you-can-eat Golden OK Corral, Stitt was pummeled during this year’s Republican primary for turning the Grand Old Party into the Grand Old Donner Party.

Trying to shed his soft-on-cannibals image, Stitt’s pledged to fry one death row inmate per month. He was going to call it his “cook of the month club,” until aides reminded him that Oklahoma uses lethal injection, not the electric chair.

Needless to say, leftists are incensed that murderers will be sent to a place from which even George Soros can’t free them. Andrea Miller of the Oklahoma Innocence Project told Yahoo News that murderers are merely children who made an oopsie: “We in this country talk so much about trying to protect children while they’re children, but we’re more than willing to throw them away on the back end when they make a mistake.”

As for those “mistakes,” among the condemned are Scott Eizember, who murdered an elderly couple so he could use their house to spy on his girlfriend across the street (d’oh!); John Hanson, who carjacked a 77-year-old woman, murdered her, then murdered a witness (whoopsie-doodles!); and Benjamin Cole, who killed a baby because its crying interrupted his videogame (uh-oh spaghetti-o!).

The first execution occurred last week: James Coddington, sentenced to death for killing an elderly man who wouldn’t loan him $50. As Coddington lay on the gurney, the priest asked if he had any last requests.

“Yeah, can you spot me a fifty?” he replied.

PICKING THE FRUITS OF KNOWLEDGE
In 2003, Vanity Fair was forced to apologize after in-house humorist “Dame Edna” (a relic of the days when grotesque drag queens worked the comedy circuit rather than the White House) wrote a “joking but kinda not” piece satirizing the lack of renowned Spanish-language authors:

Forget Spanish. There’s nothing in that language worth reading except Don Quixote, and a quick listen to the CD of ‘Man of La Mancha’ will take care of that.

Turns out the lack of classical español authors (and the total absence of them among Spanish-speakers of the Americas) is a sore spot for the Hispanic-American intelligentsia.

And yes, there is a Hispanic-American intelligentsia. Thinkers, philosophers…gardeners who consider the lilies before pruning them.

“Sorry, señor. I kink therefore I am.”

This summer, when the California Department of Public Health declared a “Covid booster emergency” among Latinos (the least-boosted demo in the state), the question became, “Who can we invoke to motivate the willful wetbacks? With blacks, we’d use MLK or Obama. Who can we use to get the beans boosted?”

Wrestlers, of course! The CDPH launched a billboard campaign in Mexican neighborhoods featuring images of beloved luchadore El Santo, the iconic wrestler whose Mexico City funeral in 1984 was attended by more than 10,000 people and who, over the course of his career, defeated Aztec mummies, Guanajuato mummies, unaffiliated mummies (dude hated mummies), vampiros, brujas, and even Hitler. The billboards featured a cartoon of El Santo with “booster” written across his chest battling a monster with “Covid” written across his chest (Ben Garrison did the text).

“Some colleges have realized that it’s actually cheaper to set up a hotline for students to call when they don’t see bias. Those phones never ring.”

Except it totally worked. Last week the CDPH revealed that thanks to the campaign, Latino booster rates are now even with all other CA demographic groups.

Some historians claim Cervantes was Jewish. While there’s no definitive way to prove it, today’s Hispanics serve as convincing anecdotal evidence that he probably was.

A Mexican walks into a tavern in Laredo. As he orders a bottle of tequila, a female barfly of questionable virtue slinks next to him. Eyeing him up, she’s startled by his sizable “endowment.”

“Hey there, amigo,” she remarks, “is that a churro in your pocket, or are you just happy to see me?”

“It’s an iguana,” the Mexican replies. “And if I were you, señorita, I’d keep my distance; he has not eaten today.”

When Jose Manuel Perez tells women he has a Gila monster in his pants, he’s not being euphemistic. When he offers to show a lady his trouser snake, he ain’t joking. The crafty Mexico/America cross-border smuggler is a coyote coyote, in the literal sense. Last week Perez pleaded guilty to smuggling more than 1,700 wild animals into the U.S. over the course of six years. When he was busted in February, he had over sixty reptiles in his pants, including lizards, snakes, turtles, and baby crocodiles.

The feds claim that “DACA Doolittle’s” exploits netted him over $739,000, a decent sum but perhaps not a big enough payday for most men to risk having snapping turtles and baby crocs next to their dingle.

Cross-border animal smuggling is driven primarily by young Americans looking to spend big on exotic “status” pets. So the next time you come across a white hipster who brings his emotional support gecko into a coffee shop, you have yet another reason to hate him.

Another market for Perez’s wares consists of Chinese immigrants who think that consuming exotic animals gives them magical powers (and it does; mainly, the power to kill millions of people worldwide).

Perez is facing twenty years in prison, which is the good news. The bad news? QAnon true believers finally got convincing proof that there really are “lizard people” walking among us…unfortunately, rather than international bankers or monarchs, it’s just some beaner with skinks up his ass.

BIAS REMORSE
Colleges and universities are installing 24-hour “bias hotlines” that students can use to report instances of racism, genderism, cultural appropriation, microaggressions, macroaggressions, and macaroniaggressions (the angry chucking of pasta).

Operator: “Why aren’t you calling me ma’am?”

Some colleges have realized that it’s actually cheaper to set up a hotline for students to call when they don’t see bias. Those phones never ring.

Plus, it’s getting harder to tell aggressor from victim in the dynamic world of bias incidents. Last week in Plano, Tex., a group of Indian women screamed bias when another woman told them to go back to India. When the Punjabis described the aggressive woman as white, she accused them of bias for not acknowledging that she’s Mexican.

Mexicans against Indians? Like the song says, “You say tamale, I say Tamili.”

Indian vs. Indian? More turban violence from people who should be bud-bud-buddies.

Welcome to America; not so much a nation as the 24-hour bias hotline of the world.

WE HOLD THESE TRUANTS TO BE SELF-EVIDENT…
In theory, Covid-related school closures were just business as usual in Washington, D.C. The district’s public schools, nearly 70 percent black, boast the worst truancy rates in the entire U.S.

One wonders what those kids are doing with their days while not in school. In a city that’s only 4 percent Asian, are there enough old Chinawomen to punch?

It’s against this backdrop of rampant nonattendance that D.C.’s dog of a mayor, Muriel Bowser, has decided to exclude non-vaxxed students from in-person on-campus learning.

Fortunately, help is on the way from our nation’s libertarians! Reason magazine has been campaigning to get D.C. to overturn the unvaxxed ban. Reason’s Rand-y dandies have led a crusade to get the district’s kids back in class, pointing out that the majority of unvaxxed DCPS students are black, so the vax mandate translates to racist exclusion!

And it worked. Last week, in response to Reason’s lobbying, D.C.’s Deputy Mayor for Education Paul Kihn announced that the mandate has been postponed until 2023; for now, all students, vaxxed or not, must return to class.

And every black student in D.C. has Reason to thank for the cancellation of their permanent vacation.

Reason staffers have been advised to stay off the streets, avoid the Metro, and generally leave town or barricade themselves in their basement. As these libertarians will soon find out, the NAP ain’t no match for the nappy.