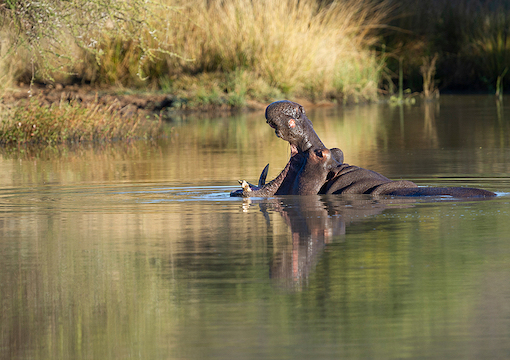 The Week’s Most Snowing, Glowing, and Ho-Ho-Ho-ing Headlines

THE TRAGICALLY HIPPO
Christmas carols in Africa have their own unique flavor:

I want a hippopotamus for Christmas,
Only a hippopotamus will do!
Mom’s got Ebola, and Marburg took my dad,
But a hippo in my stocking, that would surely make me glad!

Hippos are way better in novelty Christmas songs than in real life. The most deadly creature in sub-Saharan Africa (if you don’t count the Africans themselves), hippos are best kept at spear’s length. Sadly, this lesson was lost on 2-year-old Ugandan boy Iga Paul of Kabatoro, who decided to take a dip in the hippo-infested waters of Lake Edward.

Paul was grabbed by a hippo and swallowed whole.

A frightening experience to be sure, but at the same time, an enlightening one for a shantytown dweller; that hippo’s mouth was the first thing he’d ever seen with a solid roof.

Fortunately for Iga, a villager named Chrispas Bagonza (named after how Africans ogle a lady’s ample bosom—“Man, those are some crisp-ass bagonzas!”) chased Eaty Amin and pulled the boy out. When the hippo, irritated at the Kuntas interruptus of his missed meal, started to charge, Bagonza stoned the creature until it ran back into the lake (and it never said “Jehovah” again).

Iga was taken to a local hospital, which ironically was far less sanitary than the hippo’s mouth. Doctors pronounced him demon-free, but he was given an AIDS-tainted transfusion just to be sure.

Iga’s become something of a local media sensation. When asked if the ordeal scared him, the would-be blue-plate (-lipped) special shrugged and said, “I live in Uganda. It takes more than that.”

PUNCHIN’ JUDIES
Tranny Batman and Robin get a call from the Commissioner:

“There’s trouble at Gotham High! Girls are trying to use the girls’ bathroom in privacy!”

TransBatman answers with his characteristic solemnity:

“Thank you, Commissioner Brinton. We’re on our way!”

At Gotham High, the Bi-namic Duo prepare to deal with the wrongdoers.

TransRobin: “Holy holes, Bat-transman, this is the worst villain of all: the Cisler! A so-called ‘biological female’ and her henchwomen.”

TransBatman: “Yes, Boygirl Wonder, our most dangerous foe since we battled King Tit over his theft of Gotham’s chest binders.”

TransRobin: “I hope my new Barbie pouch doesn’t slow me down during the fight!”

The heroes enter the bathroom.

“Now that Britain is minority Christian, the people who gave the world the TARDIS have become the tardeds.”

The Cisler: “Errmahgerd! Men in the girls’ room! Get ’em.”

The Cisler and her henchwomen lie on the floor.

Last week reports leaked of an incident at an Oklahoma high school in which a boy in a dress tried to use the girls’ room, and when the girls expressed their uncomfortability at seeing his waving wheat sweeping down the plain, he proceeded to beat them to a pulp. Although technically Oklahoma law bars tranny men from women’s restrooms, this is the state where the “conservative” Republican governor, hoping to look antiracist, pardoned a black cannibal who left prison, killed his neighbor, cut out her heart, fed it to his family, and killed his family.

So there’s often a gap between what’s on the books in Oklahoma and what officials actually prioritize.

Being a minor, the tranny boy’s name wasn’t released. But expect to see him cohosting a show on MSNBC alongside the “call me ma’am” GameStop tranny.

Standing over the beaten bullies, TransBatman muses, “It’s ironic; they were done in by their own transphobia. That and the fact that I outweigh them by 150 pounds.”

MINCING WORDS
Heard the news? Gays are discriminated against in Hollywood!

Can you believe it? That’s like saying sweaty fat guys with unibrows are discriminated against in the Mafia. Or emaciated toothless blacks with sulfur stank and schizophrenia are barred from Skid Row.

But it’s true! Last week, at a formal ceremony in West Hollywood, GLAAD unveiled its 10th Annual Studio Responsibility Index, which gauges the level of “gay representation” in Hollywood.

Unfortunately, nobody at the ceremony took notice of the findings, as they were preoccupied performing oral sex on each other under the tables.

But thankfully, The Wrap published the findings the next day. “The percentage of LGBTQ-inclusive films dipped in 2021, as did screen time for queer characters.”

This might seem an odd claim to the average broadcast or streaming viewer, considering that pretty much every show everywhere is gay these days. Even classic TV shows have been retrofitted to be gay-friendly:

“Don’t get on that ship! We translated the rest of the alien book: ‘To Service Man’—it’s a cockbook!”

The thing is, though, when you unwrap The Wrap’s story you find that GLAAD has a very specific definition of what makes a show “gay-inclusive.” The gay characters “must be identifiable as such, must not be solely or predominantly defined by their sexual orientation or gender identity, and must not be a stereotype.”

A rather impossible standard. Some might even call it a double-bind, except to gays that term means “taking special care that your S&M gimp has two layers of bondage ropes.”

Thanks to the GLAAD report, expect next year’s TV season to be even gayer.

Get ready for Law and Order: HIV.

DORKUS MAYORKAS
Last week, Homeland Security Secretary Alejandro Mayorkas visited El Paso to assure Border Patrol agents that all is well at the border. He also assured them that FTX is a sound investment, that Quibi is about to make a comeback, and that Avatar: The Way of Water isn’t a pointless retread of the first film.

Needless to say, the rank-and-file agents were unimpressed (except that one dude who was like, “Yeah, this Avatar’s underwater, so it is different!”).

Mayorkas was confronted by a patrol agent who told him that his colleagues are so beaten down by hostile press, daily risks to life and limb with zero support from their higher-ups, and an administration that despises them, they’ve lost all hope.

“I wish you could see into our agents’ eyes,” the agent said. “They’re lifeless.”

As Mayorkas continues to claim that no harm comes from illegal immigration, Americans indulge in the seasonal tradition of watching A Christmas Story on TV, blissfully unaware that Bob Clark, the film’s director, was murdered along with his son by an illegal-alien Mexican driving drunk on the wrong side of the road on PCH in 2007.

It’s too bad nobody commemorates that crime every Christmas by bringing Red Ryder BB guns to the border to shoot illegal crossers.

Clark’s killer, Hector Velazquez-Nava, was sentenced to six years and then deported after his release, which means he’s almost certainly back in the U.S. by now. And if he has a sense of humor, he’ll get liquored up and kill the guy who directed this year’s Christmas Story sequel.

Commitment to a bit.

After Mayorkas told reporters “the border is secure,” he further tested their gullibility by double-dog daring them to stick their tongues to a flagpole.

And there they remain.

DON’T SAY GAY (APPAREL)
On the topic of journalists, they tend to have uneven standards regarding what constitutes a “silencing.” When Ron DeSantis shepherded a law barring tranny teachers from telling little girls “if you like climbing trees you should cut your boobs off because you’re actually a boy,” the press dubbed the law “don’t say gay,” as if gay was now banned in the state, as if mobs of homophobes were burning effigies of Wayland Flowers and Madame and banning confetti lest a Floridian youngster be inspired to follow in Rip Taylor’s footsteps.

Yet whenever a corporation, government, or academic institution actually does ban the word “Christmas,” and conservatives suggest that the secular West is waging a “war on Christmas,” journalists don their harumph-hats and sneer, “Snort, snort, if there’s a ‘war,’ where’s the howitzers?”

This year’s most egregious example of “don’t say Christmas” comes from the University of Brighton. England used to be known as a nation that appreciated Christmas, until a Kipling poem convinced generations of Brits that Gunga Din really was “a bettah man” and the government threw open the borders to Third World savages (yet another reason why poetry sucks and should be avoided at all costs).

And now that Britain is minority Christian, the people who gave the world the TARDIS have become the tardeds. U Brighton has ordered staff members to avoid the word “Christmas” because it’s too “Christian-centric.” All mentions of Christmas are to be replaced with “winter closure period,” because it rolls off the tongue so well.

Considering that winter doesn’t actually “close” until March 20 of next year, the fact that anything in December would be called “winter closure” suggests that Benny Hill might’ve overestimated his country’s intelligence.

“Blimey, ’ee slapped that bald bloke on thee ’ead. Wotsit mean, guvna? I don’t get it.”

Still, while the U.K. might not be in the spirit, The Week That Perished is.

A Merry Christmas to all our readers!