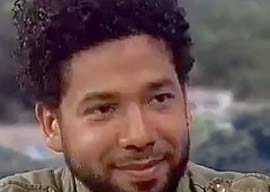 The Week’s Most Screwy, Gooey, and Jewy Headlines

BLACK/GAY/JEWISH HATE-CRIME HOAXER WALKS FREE
Just when you thought the arc of the moral universe was bending toward justice in the case of fabulist actor/hate-crime hoaxer Jussie Smollett, that arc bent over, grabbed its ankles, and was forcibly sodomized without lubrication.

Last Tuesday, the Illinois state’s attorney’s office abruptly announced that it was dropping all 16 felony charges against the disgraced actor who staged a fake hate crime against himself in a story that had more gaping holes than his body does. Mind you, there was no announcement that he had been found innocent—in fact, Joseph Magats, the Cook County attorney handling the case, said that he believed Smollett was guilty—but, hey, it’s time to heal and Mr. Smollett had no criminal record and should be set free to spread his ebony butterfly wings and continue flitting about the world even though his actions could have sparked a nationwide race war.

Magats had taken over the case after Kimberly Foxx—a state’s attorney who admitted she’d told Smollett’s family that she was trying to get Chicago authorities to drop this hot potato of a case and hand it over to the feds—recused herself after essentially committing a crime and walking free in this land of horrid white supremacy.

Their hides chafing, Chicago’s Fraternal Order of Police issued the following statement in the wake of the prosecutor’s giant puss-out:

The FOP is outraged by the decision to drop charges against Smollett, but not surprised….Since Kimberly Foxx has taken office, she has transformed the prosecutor’s office to a political arm of the anti-police movement. We renew our call for a federal investigation of her role in this case and expect the media to conduct a thorough investigation.

This is a whitewash of justice. It’s Mr. Smollett who committed this hoax. He’s still saying he’s innocent, still running down the Chicago Police Department. How dare he? How dare he? It is wrong. Full stop.

Er, we’re not sure that “whitewash” is the proper term here.

The City of Chicago sent Smollett a letter demanding that Smollett pay restitution of $130,106.15 for their costs incurred in the investigation of the bogus hate crime, adding:

Ultimately, the Chicago police investigation revealed that you knowingly filed a false police report and had in fact orchestrated your own attack….If the amount is not timely paid, the Department of Law may prosecute you for making a false statement to the City.

“If this is progress, we’d rather be live in the Stone Age. People seemed more considerate back then.”

For his part, Smollett is claiming that the dropped charges represent a total exoneration and that his mama didn’t raise no liar, oh, no, she di’n’t.

Our hope is that the feds pick up the case and prosecute him for that thing he did where he mailed a letter to his office that contained white powder and a death threat. As far as we know, that’s against da law.

FACEBOOK BANS WHITE NATIONALISM
First they came for the white supremacists—all three of them—and you said nothing.

Now Facebook has announced that it is banning all iterations of “white nationalism” and “white separatism” because there’s really no difference between those things and “white supremacy,” despite the fact that there are clear distinctions between all three terms, because even though supporters of these ideologies hardly ever encourage violence, that’s what they’re really gunning for, and if we don’t silence them and put them in camps, who knows when they’re going to start gunning down poor old black ladies in wheelchairs and innocent Muslim chemo patients riding shotgun on those wheelchairs?

Equating white nationalism with “hate”—as these assholes are wont to do while expecting we can’t tell the difference—Facebook’s wormy spokespeeps explained:

Today we’re announcing a ban on praise, support and representation of white nationalism and white separatism on Facebook and Instagram….It’s clear that these concepts are deeply linked to organized hate groups and have no place on our services…over the past three months our conversations with members of civil society and academics who are experts in race relations around the world have confirmed that white nationalism and white separatism cannot be meaningfully separated from white supremacy and organized hate groups….People searching for these terms will be directed to Life After Hate, an organization founded by former violent extremists that provides crisis intervention, education, support groups and outreach.

Black nationalism? Not a problem.

THE WANG OF YANG
Just because the average erect penis size of North Koreans is 3.8 inches and 4.3 inches for Chinamen doesn’t mean it’s OK to mock Mother Nature’s cruel underendowment of Oriental males.

It’s funny as all get-out, but that doesn’t make it OK.

The Washington Examiner just ran the following headline about Democratic presidential candidate Andrew Yang, and if there’s a funnier headline from now until Election Eve 2020, we’ll eat a box of condoms on live TV:

Andrew Yang ‘self-conscious’ about his wang

Last year in his book The War on Normal People, Yang recalled being taunted by non-Asian bullies in school about the astronomically high statistical possibility that he was packing a tampon between his legs:

‘Hey, Yang, what’s it like having such a small dick? Everyone knows Chinese guys have small dicks.’…I became quite self-conscious. I started wondering if I did indeed have a small dick.

He wondered? There’s only one way to find out. We thought Asians were good with things such as numbers and measurements.

BLACKS-ONLY POLITICAL EVENT IN GEORGIA
Because we are a nation driven apart by division and separatism and difference and disunity, we all need to come together as one, and in order to achieve this, we need to keep all the white people out, and if you don’t understand this, we’re going to report you to Facebook for being a white separatist.

Last week in the beautiful but crime-ridden coastal Georgia town of Savannah, a black church held a black meeting with black politicians and posted a “Black press only” sign on their welcoming doors of inclusion. According to the black people who attended, there was talk of inclusion and unity, but if you have a problem with excluding white people, you don’t realize that this country guarantees freedom of association for everyone but white people, you whitey-white bigot.

NON-OBESE MEN URGED TO CUDDLE WITH EACH OTHER WITHOUT ACHIEVING ERECTIONS
In order for men to shed their toxic veneer of masculinity like a bunch of snakes molting their skin in a serpentine circle jerk, they must come together and cuddle one another so long as they don’t have back problems, aren’t fat, and promise that they won’t get boners in the process.

This is the goal of the Men’s Therapeutic Cuddle Group, some squirrelly weekly get-together in suburban Philly designed “to provide a safe, structured, and platonic environment for men to experience ‘the three As’: Acceptance, Affirmation and Affection.” As long as you have a penis, they don’t care if you’re black, white, yellow, brown, or teal, but they warn that “men with back or knee injuries, or those suffering from obesity may find it difficult to fully participate.”

The group insists that all cuddling be nonsexual in nature and demands that all men shower before attending. However, they note that “most men experience some level or arousal during cuddling. This is completely normal…we’re all guys. We just ignore it. There is no shame here!”

That’s precisely the problem—there is no shame there. There should be.

VIBRANT IMMIGRANT SUSPECTED OF DISMEMBERING A WOMAN WHILE SHE WAS ALIVE
Because diversity is our strength and because illiterate Nigerian savages need to be imported to do the dismembering that Italians won’t do, it is no surprise that a Nigerian drug dealer with the hyper-ironic name of Innocent Oseghale is currently on trial for the murder of an 18-year-old Italian girl whom he also allegedly dismembered—while she was alive.

According to a witness in Mr. Innocent’s trial, the accused began stabbing indigenous Italian Pamela Mastropietro immediately after raping her and then, assuming she was dead, he left the scene to summon help in dismembering her. After they returned and started severing her foot, she allegedly cried out for help, spurring the vibrant migrants to stab her until she shut up forever.

If this is progress, we’d rather live in the Stone Age. People seemed more considerate back then.