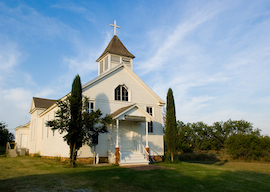 The Week’s Most Wheezing, Teasing, and Displeasing Headlines

AMERICA LOSES ITS RELIGION
According to the recently released General Social Survey, Americans who identify with no religion now edge out Catholics and Evangelicals, and all three groups leave mainline Protestants in the dust.

The survey found that people with no religion—identified as “nones”—accounted for 23.1% of the population in 2018, beating Catholics by a razor-thin one-tenth of a percent and Evangelicals by six-tenths of a percent. Mainline Protestants, whose numbers have seen a 62.5% decline since the early 1980s, run a distant fourth with a mere 10.8%, but at least they can take slim comfort that they still outnumber the Jains and Hare Krishnas.

The survey finds that over the past three decades, the quotient of Americans who say you can take your organized religion and stuff it up your hellhole has ballooned by 266%. A concept known as “secularization theory” argues that “as countries become more industrialized and prosperous then the throwing off of religion becomes more normalized.”

This should come as no surprise, though. Studies have consistently shown that religious belief is negatively correlated with intelligence. And across the globe, religious faith is most intense in places such as turd-infested dummy zones such as Africa and the Middle East.

BLACK WOMAN SAYS WHITE PEOPLE “OWN TIME”
Brittney Cooper is “an associate professor of women’s and gender studies and Africana studies,” which sounds about as intellectually challenging as swatting at tsetse flies.

She says that the concept of time is a white thang.

From a TED talk she delivered:

Typically, we talk about race in terms of black and white issues. In the African-American communities from which I come, we have a long-standing multigenerational joke about what we call CP time or colored people time. Now, we no longer refer to African-Americans as colored. But this long-standing joke about our perpetual lateness to church, to cookouts, to family events and even to our own funerals remains. I personally am a stickler for time. It’s almost as if my mother, when I was growing up, said, we will not be those black people. So we typically arrive to events 30 minutes early. But today I want to talk to you more about the political nature of time; for if time had a race, it would be white. White people own time.

So THAT’S why black people are always late!

She also says that the concept of time has “a political history bound up with the plunder of indigenous lands, the genocide of indigenous people and the stealing of Africans from their homeland.”

You know who doesn’t have a concept of time? The Australian aborigines, and look how well that worked out for them. Maybe white people are onto something with this whole “time” thing.

MIDDLE EASTERNERS RESENT BEING CALLED WHITE
To be fair for once in our friggin’ lives, we’ve never considered Middle Easterners to be white. Anyone with a functional pair of peepers knows that they tend to range in hue from mocha cappuccino to the color of goat urine.

Americans of Middle Eastern origin are starting to also notice that they aren’t white, because they aren’t getting any of the handouts that nonwhites are entitled to in this rampagingly white-supremacist country.

“May the fleas of a thousand camels infest the armpits of all ingrate intruders.”

Sarah Shabbar, whose ancestors were Jordanian, says that she didn’t have a big deal with being considered white until she got to college and realize that there was no special free money set aside for Arabs.

David Shams, an Iranian, likens officially being considered white to a stigma:

It makes me feel unheard, like I’m shouting into this void saying that we’re not white and no one is listening….Having the federal government label us as white, while our social status is anything but, further stigmatizes our position in society….We have no recourse. We have no way to talk about diversity or discrimination because if we’re white, we can’t be discriminated against based on race. And so we’re left in this gray area.

May the fleas of a thousand camels infest the armpits of all ingrate intruders.

NEW WAVE OF CHURCH DESECRATIONS IN FRANCE
France, a country that some Taki’s Mag staffers aren’t exactly fond of, is experiencing a wave of burglaries and desecrations in Catholic churches across the country.

Such blasphemies include feces smeared in the form of a cross on a church wall, teenagers urinating in holy water fonts, graffiti of satanic symbols, Virgin Mary statues shattered and lying in pieces, Jesus statues decapitated, and consecrated eucharists spread randomly on the floor.

A sociologist with the gay-sounding name of Phillipe Poiter seems to finger Muslims rather than Satanists for the crimes: “Part of the population has not been socialized as Christians and does not realize what these attacks on the sacred can mean.”

We think he’s wrong—not about who’s committing the crimes, but about whether they realize what these attacks symbolize. We believe they’re fully aware of what they’re doing.

GROWN MAN TRANSITIONS INTO “HUMAN PUP”
Kaz James is a 37-year-old Englishman who, due to some quirk of either neurology or personality, believes that he is a dog.

The store manager from Greater Manchester eats out of a dog bowl and wears a £2,000 fur suit that makes him look like a dog, and when you really think about it, if he was actually a dog like he claims he is, he wouldn’t need that suit.

Kaz attempts to explain why he’s so weird:

I didn’t ever feel like a human, I always felt like a dog that was really out of place. I never really had a name for it, being a pup wasn’t a thing I knew about. When I met other people like me I felt I could be myself. I was known by my friends for saying hello to them by grabbing hold of the collar of their shirt in my teeth and biting or licking them, very canine-type behaviors. It was always how I was. The first time I heard the term of being a pup was through a pup I met online, he was the first person I met who was like me. Through him, I knew other pups and learned a whole new language of this other world that I didn’t know about with a whole bunch of other people who were like me. It was a liberating moment knowing there were other people like me, having felt properly weird for the longest time.

HATE-CRIME HOAX OF THE WEEK
Forty-seven-year-old Andrew McClinton is a black man who lives in Jackson, MS, a town which is 80% black and really should be enough for him to feel comfortable and calm down about the phantom demon of “racism.” If anyone’s kicking anyone’s ass for racial reasons in Jackson, MS, we have a strong suspicion that they aren’t melanin-impaired.

McClinton recently pleaded guilty to burning down the Missionary Baptist Church in Greenville, MS, a week before the election and spray-painting VOTE TRUMP on the church’s charred remains.

Errick D. Simmons, the mayor of Greenville and therefore a man who should at least know how to spell “Eric,” mentioned something about “the past and history” and how we should focus on bad things that happened to black people decades and centuries ago rather than bad things that black people are actually doing today.

FALSE RAPE ACCUSATION OF THE WEEK
In 2014, an Australian woman named Sarah Jane Parkinson accused her fiancée of rape and assault after what was, as luck would have it, the day she’d embarked on another relationship with a new man. When police arrived at her house, she’d gone to the trouble of undoing her jeans and giving herself a head injury that she blamed on hapless fiancée Daniel Jones.

Jones was tried, convicted, and spent five months in a creepy, moldy (we made that part up) Australian prison until investigators concluded that Parkinson was full of beans. Upon his release, Jones lamented:

I thought she was the love of my life….I’d just built a house and she’d moved in with me, everything was going well. I had everything going right… and in that instant, everything just went to shit…. There were times when I considered ending it all….[She is] a lying, vindictive, cancerous woman.

The lyin’ Aussie hussy has been convicted of filing a false police report and will now have to spend three years in a creepy, moldy Australian prison.