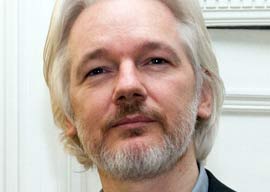 JULIAN ASSANGE ARRESTED
Master hacker and exotic dancer Julian Assange has been holed up in London’s Ecuadorian Embassy since 2012 when they offered him refuge from some rather flimsy rape charges regarding a 2010 incident in Sweden.

Now the Ecuadorians have sent him kicking and screaming into the hands of police officers who hauled him into court to face charges for skipping bail in the UK. He was then slapped with a US extradition request for hacking an estimated 750,000 classified documents. He is expected to face further charges in the US for espionage, a crime that carries a potential 20-year sentence.

As fate would have it, his arrest came one day after Assange’s Wikileaks website released a trove of documents accusing Ecuador of an “extensive spying operation” and a month after the IMF approved a $4.2 billion aid package from Washington to Ecuador. Officials accused Assange of being a stinky and combative tenant who was prone to smearing feces on the walls. To be fair to the Ecuadorians, Assange does look like he’s aged 40 years since being holed up in their Embassy and bears the appearance of a man who smells terrible.

Airheaded tit monster Pamela Anderson, who claims to have had a sexual relationship with Assange while he was in captivity, went on Twitter to accuse Ecuador of expelling Assange because he “exposed” them. She also accused the UK of being “America’s bitch” and that they “need a diversion from your idiotic Brexit bullshit.”

You may want to take it down a notch, Pam. You’re not helping.

THOSE WACKY RAPPERS AND THEIR KOOKY DEATH THREATS
A long time ago, Chuck D from black nationalist hip-hop group Public Enemy said that “rap is black America’s CNN,” which would make sense if CNN anchors were constantly threatening to slit bitches’ throats and shoot people between the eyes over the slightest sign of disrespect.

A 26-year-old Florida rapper named Christopher Maurice McCallum—he really needs to work on the name there if he ever wants to sell records—has been arrested and charged with threatening a mass shooting after he posted lyrics on Facebook threatening to “catch you at a Gator game and shoot the whole campus up.”

Other rappers are throwing their support behind the legal appeals process for Mayhem Mal, née Jamal Knox, who was arrested in 2012 after police found a loaded gun and fifteen bags of heroin in his car. Shortly after his arrest, Mr. Mal released a rap track threatening the two officers who’d busted him—and naming them in his song. He was subsequently jailed for making terroristic threats. His defenders claim the legal system and “society” simply don’t understand hip-hop and that the lyrics aren’t meant to be taken seriously, even though, you know, he mentioned the two cops by name.

French rapper Nick Conrad has been punished—if you could call it that—with a suspended fine for a video he made called “Hang White People” that shows Conrad kidnapping, torturing, and hanging a white man. It also contains the lyrics “I go to the nurseries, I kill the white babies. Catch them quick and hang their parents!” As with Mayhem Mal, Conrad and his supporters are claiming that white people are taking it all way too seriously because they are racists who don’t understand or even attempt to appreciate the deep nuances and complexities of black culture.

NHS STAFFERS QUIT OVER TRANNY-KID PROGRAM
In 2010, 94 British children were referred to the Gender Identity Development Service clinic for possible counseling as to how to poison themselves with hormones and delude themselves that they are anything other than the gender in which they were born.

“Are you starting to feel that they’re just messing with our heads?”

Last year, over 2,500 children were referred, and at least five clinicians have resigned, claiming that gender conversion therapy for children is scientifically untested and potentially dangerous. According to one of the clinicians, all of whom are unnamed:

I felt for the last two years what kept me in the job was the sense there was a huge number of children in danger. I was there to protect children from being damaged….This experimental treatment is being done on not only children, but very vulnerable children.

Carl Heneghan of the University of Oxford underlines the idea that none of this gender voodoo has been established as safe or even efficient:

Given paucity of evidence, the off-label use of drugs in gender dysphoria treatment largely means an unregulated live experiment on children.

The message is clear: The only reason one would object to using children as sexual guinea pigs is because one is blinded by irrational hatred.

TEACHER SUSPENDED FOR READING JAMES BALDWIN ALOUD
Philip Adamo is a professor at Augsburg University in Minneapolis. He was recently suspended for reading the following sentence from James Baldwin’s The Fire Next Time aloud in class:

You can only be destroyed by believing that you really are what the white world calls a nigger.

Pardon our unbearable whiteness, but that sounds harsher toward white people than toward The Blacks.

Regardless, word spread like racial wildfire among students that Adamo had said the “N” word in class. The next day, students requested that Adamo leave the class, which he did while additional students filled the classroom. Adamo tried to justify his behavior via emails, but it was too late. He was suspended.

He has subsequently apologized and pretended that even mentioning the word causes “harm,” but as anyone who is familiar with leftist totalitarianism knows, attempting to compromise or apologize will only make them sink in their talons deeper.

MAN FINED FOR REFERRING TO A MALE AS A “MALE”
A Canadian Christian preacher who is so blinded by hate that he actually thinks that men are men and women are women has been fined $55,000 for referring to a biological male as a “biological male.”

Last month, a woman in England received a knock on the door by police after she identified a child based on the, er, gender it was assigned at birth. This sort of thing happens again and again on that tiny soggy island that ruled the planet a mere century ago.

Starting in 2015, New York City legalized fines of up to a quarter-million dollars for the crime of calling a boy a boy. In Oregon, a teacher received a $60,000 settlement in 2016 after accusing his/her/its associates of refusing to submit to the delusion that it somehow had swapped out the gender that Mother Nature had given it.

Are you starting to feel that they’re just messing with our heads?

LESBIANS SEEK SPLIT FROM OTHER QUEER GROUPS
Everyone knows that lesbians are the most unpleasant people in the world and that if they truly enjoyed being with other women, they’d smile every once in a while.

As further proof that they can’t get along with anyone, some especially mouthy carpet-munchers are now urging their muff-lickin’ sistas to reject the rest of the “LGBT” community. A self-described “lesbian feminist activist” who has given herself the edgy name of “Angela Wild” rails against the gays, the bisexuals, and the trannies in a rant called “Lesbians need to get the L out of the LGBT+ community.” She claims that the male-to-female trannies, sometimes with penises intact and pointed in her direction, are forcing her to have sex with them under the ruse that it is authentic lesbianism:

Our research findings show that lesbians are under huge pressure within their LGBT+ groups to accept transwomen as sexual partners so as not to be labelled as trans-exclusionary radical feminists – or Terfs – and subsequently excluded by their GBT groups.

Lesbians who responded to our survey also reported experiencing sexual violence from transwomen ranging from online grooming, domestic and sexual violence as part of a relationship, sexual harassment, sexual assault (including in women’s toilets), coercion and rape.

Ms. Wild also claims that lesbos who refuse to have sex with trannies are being called “transphobic bigots” and “Nazis” who should be “dragged out by our saggy tits.”

We have no comment. We just want these dizzy broads to keep catfighting.

STUDY: SEXY WOMEN MAKE OTHER WOMEN VIOLENT
Living in a white supremacist patriarchy as we do, we are endlessly sold the debunked trope that women are something less than innocent goddesses and that they are often manipulative and malicious, especially toward one another.

A recently published study called “Aggression Toward Sexualized Women Is Mediated by Decreased Perceptions of Humanness” only serves to perpetuate such destructive myths:

Researchers have argued that the regulation of female sexuality is a major catalyst for women’s intrasexual aggression….Results showed that women rated another woman lower on uniquely human personality traits when she was dressed in a sexualized (vs. conventional) manner. Lower humanness ratings subsequently predicted increased aggression toward her in a behavioral measure of aggression. This effect was moderated by trait intrasexual competitiveness; lower humanness ratings translated into more aggression, but only for women scoring relatively high on intrasexual competition.

In other words, if women encounter another woman whom they suspect may be sexually attractive to men, they will dehumanize her in order to feel completely righteous about clawing out her eyeballs.

H. L. Mencken once defined a misogynist as “a man who hates women as much as women hate one another,” but his views can be discounted because he was not only a confirmed misogynist but also a card-carrying anti-Semite.