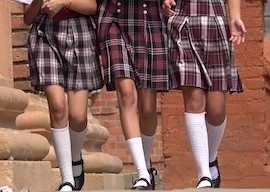 The Week’s Most Accidental, Detrimental, and Unsentimental Headlines

LESBIAN PENGUINS IN LONDON ACCUSED OF RAISING A GENDER-NEUTRAL CHICK
As we all know—under threat of death or castration—gender is a meaningless social construct, whereas sexual orientation is spot-welded into your DNA. Although it might seem like many lesbians may have been shunted down that lonely highway because they are fat, plain, and fundamentally unappealing to men, they were born lesbians, even though the fact that they were also born with vaginas doesn’t mean that one day they can switch teams and suddenly decide that they’re men.

Rocky and Marama are the names of two lesbian penguins at the Sea Life London Aquarium who have been assigned to raise a penguin chick whose gender has not been released to the press. Headline after headline—such as “This Lesbian Penguin Couple Is Raising a ‘Genderless’ Chick”—seems to imply that the dyke lezzie couple is consciously refusing to assign a gender to the baby penguin, but it must be understood that this is simple anthropomorphism from people who seem to think that penguins are remotely as capable of being insane as human beings are.

According to a statement from the aquarium, the chick will not be tagged with a gender-specific name and is the first in its history “not to be characterized as male or female.” According to General Manager Graham McGrath, “It is completely natural for penguins to develop genderless identities as they grow into mature adults.”

In Berlin—which is where the Nazis had a PO box and the Alt-Right was basically invented back in the 1930s—two male homosexual penguins tried and failed to hatch an egg, which is all the evidence anyone should ever need that sodomy is an abomination before God and will be punished with barrenness and shame and endless sadistic torture.

NRA SUES SAN FRANCISCO FOR DECLARING THEM A “DOMESTIC TERRORIST ORGANIZATION”
San Francisco is a city in California where everyone has AIDS and wantonly defecates in the streets. Last week, the city’s Board of Supervisors—which we assume features at least one quadriplegic genderqueer ballerina with Cherokee ancestry—declared that the National Rifle Association, which used to be helmed by a guy with the extremely gay-sounding name of Wayne LaPierre, is a “domestic terrorist organization.” But rather than storming into City Hall and blasting all the members of the Board of Supervisors—which is what you’d expect terrorists to do—the NRA merely filed a lawsuit against the city for violating its free-speech rights. Early reports that the Board of Supervisors retaliated by wantonly defecating on NRA members could not be verified at press time.

“It’s important that transgender schoolchildren not be viewed as weird and icky, despite how weird and icky everyone knows they are.”

To make a long story short, someone at the Times was targeted by someone who dredged up ancient “anti-Semitic” tweets the Times writer had written, which led to the Times frantically attempting to explain that they were noble standard-bearers of a sanctified profession where they, and they alone, had the right and glorious power to destroy others based on things they’ve said or done in the distant past:

[U]sing journalistic techniques to target journalists and news organizations … is fundamentally different from the well-established role of the news media in scrutinizing people in positions of power.

It is typically blind of a Times writer to see themselves as anything but a person in a position of power. Yea, let them all be hoisted on their own petards.

FEMALE STUDENTS BANNED FOR WEARING SKIRTS BECAUSE THEY’RE NOT “GENDER-NEUTRAL”
It’s important that transgender schoolchildren not be viewed as weird and icky, despite how weird and icky everyone knows they are. But as anyone with the merest understanding of what is meant by “rights” knows, one’s rights only come at someone else’s expense. A school in the British town of Lewes recently forbade its girls from wearing their traditional regulation grey pleated skirts and instead demanded they wear “gender-neutral” slacks along with all the boys and the one or possibly fewer transgender students at school.

Demanding their Goddess-given right to display their thighs, at least 50 girls showed up on the first day of school wearing skirts, only to be turned away by school officials and to have the police summoned to behave “like bouncers.” If there were any “transgender” students at the school, it is more statistically likely that their mind was occupied with thoughts of suicide rather than the skirts/slacks war.

NIGERIAN-BORN RAPPER ENDORSES THE MURDER OF WHITES AND THE COVETING OF THEIR BITCHES
Swedish rapper Jesse Ekene Nweke Conable was born in Nigeria and sure as hell looks like it. Even though he found Nigeria so undesirable that he fled to Sweden in 2008 and begged them for a citizenship that they foolishly granted him, the gibberish-spewing ingrate says he hates white people and wants to kill them. In comments from a private message forum called “Blacks Only” that were leaked to the press, Conable makes it really, really clear that he’s got some issues with the whites:

We, blacks [will] become number one and take over these whites. Like these whites took us as slaves we should take them as slaves and treat them even worse….We’ll take their bitches and we’ll take their money. To be perfectly honest, we will be the best race ever. We are African warriors, they are not on our level. This is just the beginning, black power….If any white guy or white girl is trying to talk shit about you, shoot them! If they talk shit about your family, shoot them!…You cannot be racist if you are not white.

When informed that his comments had been leaked to the public, Conable—who has over a quarter-million YouTube subscribers—threatened to “delete” the “snitch.”

Clearly, this bright young boy has some anger issues.

STUDY: 96% OF AMERICAN COUNTIES BECAME LESS WHITE SINCE 2010
A statistical analysis by Brookings Institution demographer Bill Frey reveals some sobering facts if you’re one of those racist white supremacists who isn’t cheering for white extinction:

• Over the same time period, the number of whites in America has only grown one tenth of one percent and will begin an actual decline in raw numbers over the next five to six years.

• In 10 years, America’s 20-something population will be majority nonwhite.

• Millennials and Zoomers are much more enthusiastic about white decline than those oft-maligned GenXers and Baby Boomers.

Just remember: You’re crazy if you think it’s happening, even though we’re going to laugh at the fact that you’re powerless to stop it from happening.

GENDER BIAS AMONG STUFFED ANIMALS IN MUSEUMS
Attention, all ye woolly mammoths and stuffed bison that populate museums across the world—your patriarchal grip is weakening. A team of scientists from the University of Copenhagen who all apparently share a fetish for examining the genitals of taxidermied animals in museums studied the databases of museums of natural history across the globe and concluded that the dead animals who were stuffed and mounted in their dusty hallways were disproportionately male. Sixty-four percent of dead-’n’-stuffed bear carcasses were male, which paled in comparison to the robust three-quarters of stuffed bison with noticeably male genitalia. Armadillos and bats were also suffocatingly and toxically male. Clearly the only path to gender justice is to go out into the wild and wantonly begin slaughtering female animals.