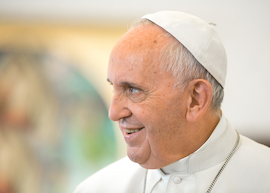 POPE FRANCIS FAT-SHAMES THE WORLD
Since you never see him wearing yoga pants, it’s impossible to tell whether or not Pope Francis is in good shape. Not only do the official church vestments make a man look holy—they cover over a possible lifetime of dietary sins.

But it is not our role to judge. Whether or not he’s being hypocritical, Pope Francis recently agreed—in spirit, at least—with a recent Taki’s Magazine editorial which plainly stated that “Fat People Are Killing Us.”

While addressing some guy with an unpronounceable Asian name who works on food policy for the UN, the pope noted that nearly as many humans are obese worldwide as are chronically hungry—there are 700 million Mr. Fatty Fatpants globally compared to 820 million belly-bloated stick bugs—and said that food “is ceasing to be a means of subsistence and turning into an avenue of personal destruction.”

(On a side note, Avenue of Personal Destruction will always be our favorite Guns N’ Roses album.)

But instead of doing the sensible thing—i.e., telling all the obese people to hand over their sandwiches to the malnourished—the pope had to immediately go full-blown Chapo Trap House hipster communist again:

The battle against hunger and malnutrition will not end as long as the logic of the market prevails and profit is sought at any cost, with the result that food is relegated to a mere commercial product subject to financial speculation and with little regard for its cultural, social and indeed symbolic importance….It is a cruel, unjust and paradoxical reality that, today, there is food for everyone and yet not everyone has access to it, and that in some areas of the world food is wasted, discarded and consumed in excess. To escape from this spiral, we need to promote economic institutions and social initiatives which can give the poor regular access to basic resources.

Or maybe we could start taxing the churches. You can’t have “social initiatives” without taxes, right?

HUNGARY THREATENS TO “USE FORCE” AGAINST UNWANTED REFUGEES
Speaking of hunger—oh, sorry, Hungary—Prime Minister Viktor Orban recently got into a penile staring contest with Turkish President Recep Tayyip Erdogan, and only history will tell whose penis blinked first.

In what was basically a promise to wage race war, Erdogan threatened to “open the gates” and flood Europe with 3.6 million refugees if Europeans persisted in criticizing his recent decision to stick his toes into Syria:

Hey EU, wake up. I say it again: if you try to frame our operation there as an invasion, our task is simple: we will open the doors and send 3.6 million migrants to you.

Flexing his pecs and puffing up his lats, Orban told Erdogan to kick rocks:

If Turkey sets off further hundreds of thousands (on top of those it has already), then we will need to use force to protect the Hungarian border and the Serbian-Hungarian frontier and I do not wish for anyone that we should need to resort to that.

Erdogan is headed to Budapest next month for a powwow with Orban. We’d take Orban in a traditional wrestling match—and Erdogan if they were to compete in oil wrestling.

ENGLISH POLICE LET MALE RAPISTS DESIGNATE THEMSELVES AS FEMALES
Despite the fact that by now, everyone—including and maybe even especially the trannies—realizes that this whole “tranny” thing is merely a government psyops program to break us psychologically and force us to admit that apples are oranges so long as you please shut up about it, they are never going to shut up about it no matter how pathetically and abjectly we capitulate.

“These people aren’t going to stop until something bad happens, are they?”

Six different English police forces are now allowing male rapists—and in English law, a penis is necessary to commit rape, so “male rapist” would sound redundant if we weren’t living in an insane asylum—to register their gender as female.

For Nicola Williams, the director of a group called Fair Play for Women who has that perma-trauma look on her face that suggests she might have actually been raped at least once and perhaps serially, this is yet another slap in the face. If you’re gonna be raped, she argues, for heaven’s sake at least let it be by a man with a traditional male organ:

You can’t get much more of a male crime than rape. It would be highly offensive to a woman who was raped to have it written down that her attacker was a female when clearly that was a male with a penis.

It’s also counterfactual and counterintuitive to allege that woman can rape women. As everyone knows, if you get a couple drinks in them and they start making out, they’ll hop in the sack faster than you can say, “Billie Jean King.”

THE EPIDEMIC OF RACISM IN NORTH AMERICAN PARKING LOTS
Parking lots should be a place where all groups, creeds, races, genders, gender identities, sexual preferences, disabilities, accents, and heights can come together to park their cars.

Too often, however, they resemble Klan meetings or beer halls in Nazi Germany.

In Canada—it’s this country to the north of the United States that no one ever thinks about—a simple parking dispute has turned into a mini race war. In British Columbia last August, a Chinese lady named Amy Xu began filming a parking dispute with a woman who appeared to be white and who had obviously not only committed a violation by occupying part of the China lady’s parking space, she also slammed her own door into another car while trying to avoid Chinese street justice.

In the film, which of course went viral because it’s hilarious, a woman subsequently identified as Carla Waldman blows raspberries at the Chinese woman and begins chanting “Chinky Chinky China Lady,” which we must admit is the dadgum catchiest racial slur we’ve heard in a coon’s age. She also tells her, “Go back to China where you belong, ya fuckin’ asshole….You give the people a bad name here. We hate you people.”

It turns out that Waldman is Jewish and an active campaigner against anti-Semitism.

In Connecticut, two college students who are described as “white” but appear swarthy and whose surnames are Albanian and Turkish have been arrested…

…that’s right—arrested and charged with a crime…

…after a surreptitious video revealed them walking in a campus parking lot and gigglingly saying the word “nigger.”

Campus police arrested U. of Connecticut students Jarred Karal and Ryan Mucaj last Monday and charged them with violating a new state law that makes it a crime to ridicule “any person or class of people on account of creed, religion, color, denomination, nationality, or race.”

During a campus protest Monday afternoon, hundreds of students allegedly marched in horror at the thought of the “N-word” being uttered at their school, chanting, “It’s more than just a word.”

No, it’s not. It’s just a word. When you think it’s more than just a word? That’s when you start screwing up everything.

A third person seen in the video was not charged, and we’ll assume it’s because he was an N-word.

FESTIVE SEASONAL BLACK-O’-LANTERNS LEAD TO OUTRAGE, DISGUST
Due to public outrage and the looming threat of yet another global race war, a Bed, Bath & Beyond store in Nyack, NY was forced to pull its “controversial” black jack-o’-lanterns after an extremely fat and unpleasant-looking black man named Wilbur Aldridge, director of the regional NAACP, threatened to shame them and shame them and keep shaming them.

The black-o’-lanterns initially caused a stir after a local law firm proudly displayed them outside their offices. In the ensuing hurricane of invective, a spokes-lawyer issued a statement insisting they had no idea that people would be offended by the black pumpkins and that they actually hate racism as much as the next guy—and the next guy hates racism a lot.

These people aren’t going to stop until something bad happens, are they?

HIV-POSITIVE WHITE DJ ACCUSED OF PIMPING OUT NEARLY 700 BLACK GIRLS, NO JOKE
It’s not often that you hear of a white pimp who traffics in black girls—it’s usually the other way around, and to be frank, it’s truly one of the rare entrepreneurial endeavors in which black males excel.

However, a white DJ in South Carolina named Jason Roger Pope—a blank-faced wigger who appears incapable of expressing any emotion on his mug whatsoever—was arrested in August and charged with sex crimes and human trafficking. Arrest warrants state that between July 2017 and July 2019, Pope forced four underage black girls to have sex with him at his home. The youngest was 13.

Oh—Pope is HIV-positive, too. Figured it was time to throw that golden McNugget into the stew.

He is suspected of luring nearly 700 black girls into a life of prostitution. He has a Facebook photo gallery called “DJ Kid (Parties & Girls)” that shows him cavorting—again, each time with absolutely no expression on his face—with more than 100 ladies of Negroidal ancestry.

Jason, if what they say about you is true, what you’ve done is not cool at all—at ALL. But we’d be lying if we said it wasn’t impressive.

GOOGLE BANS FAGGOTS FROM ITS ADS
Like everybody else, we figured that Google was a “woke” and tolerant corporation. We also assumed that everyone who runs it is gay, just like they are at all the other tech titans.

Boy, were we wrong!

An English restaurant called Fanny’s Rest Stop Café—for you Americans, that translates as “Vagina’s Rest Stop Café”—recently had an ad pulled for its faggots and peas dish because Google’s homophobic algorithmic wizards classified it as “inappropriate and offensive content.”

Wait a minute—what’s wrong with peas?

You don’t have to love the gays, Google. But we thought you accepted them. To hear that you banned them, though, makes us feel like we’re living in Germany in the early 1930s.