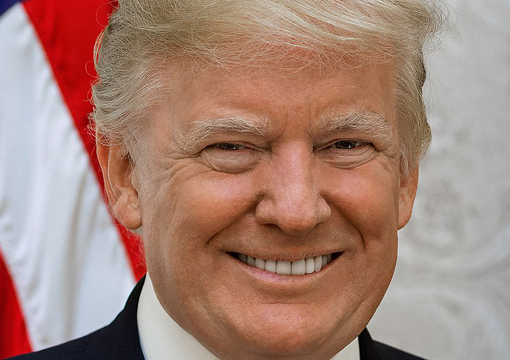 The Week’s Most Vivacious, Flirtatious, and Salacious Headlines

TRUMP GETS IMPEACHED—WE THINK
Approximately two seconds after Donald Trump was declared the winner of 2016’s presidential election, a group of disgruntled malcontents became galvanized around the idea that his victory was a crime against humanity on the scale of the Soviet gulags or the NBC action series Manimal.

They started screaming about miscounted votes, but when the votes were recounted, he had still won. Then, for two solid years without even a hiccup-length pause, they assured us that Russia had bought the election by, we’re not really sure, paying for some Facebook ads and watching Trump pee on hookers or something. Shortly after that whole foiled plot fell through, they acted as if Trump inquiring whether Joseph Biden and his son had committed any crimes was the real crime and that this will finally be the way that American democracy is restored—by ousting a legally elected president after spending three years doing the equivalent of sticking their fingers in their ears and chanting loudly.

Last Wednesday, the House of Representatives voted to impeach Trump on two articles—obstruction of Congress and abuse of power—but since the articles have yet to be handed over to the Senate, he technically hasn’t been impeached yet. He joins Andrew Johnson, Richard Nixon, and Bill Clinton among presidents whom the House has voted to impeach, but as of this writing, the Senate has never delivered a conviction through trial.

Whether he stays or goes—he’ll probably stay and get reelected—the childish tantrums his opponents have been throwing ever since his election, combined with the fact that we can’t think of a single promise he made on which he has delivered, have combined to give us a case of Democracy Fatigue that’s so severe, it almost feels fatal.

NERD: THE NEW N-WORD?
Sonja Falck is a psychotherapist who, judging from the crooked smile in that picture, seems at least a tiny bit unbalanced. While appearing on Good Morning Britain to plug her new book, Extreme Intelligence: Development, Predicaments, Implications, she stated that using terms such as “nerd” and “geek” to disparage intelligent people constitutes hate speech on the level of that other N-word that no one besides the “N-words” whom it targets is allowed to say:

I think people find it startling because very high IQ people are a minority group in society who are very much ignored, they’re not understood and largely neglected….It’s the case that very high IQ people are bullied at school for example, they’re a target for being bullied quite viciously. Things are changing, words do evolve after time, but there are many words like brainiac, egghead, nerd, that mean socially awkward and contemptible….Hate crime is simply about somebody being targeted in a negative way for who they are. A person with a very high IQ who comes across in a different way often is targeted in that way.

On Twitter, someone said that Dr. Falck’s comments were “an insult…to your viewers who experience hate crime on a daily basis.”

What’s truly inspirational is that here we have a brave soul who is victimized by hate crimes every day, yet still has time to tweet. The resilience of the human spirit makes us crash to the ground bawling multiple times every day.

OPIOID-PEDDLING SACKLER FAMILY NOW PEDDLES HANDY OPIOID OVERDOSE ANTIDOTE
The Sackler Family, which owns Purdue Pharma, has breathlessly racked up a net worth of $14 billion merely by peddling the painkiller Oxycontin. Pay no mind that since the opioid crisis began, painkillers have killed an estimated 400,000 Americans. That’s more than the total deaths either side suffered in the Civil War. It equals the average total number of people murdered in the USA over a 30-year span.

Now, as luck would have it, the Sacklers are rushing to the rescue of America’s hapless millions of opioid addicts by selling an overdose antidote! The circle is complete! The cycle of profit is whole!

Through their overseas company Mundipharma, the Sacklers have now received approval to peddle a nasal spray containing the overdose antidote naloxone, which previously has only been available via injection and is thus tres inconvenient when you’re in the throes of an impromptu OD. The product is called Nyxoid and has been approved for use in New Zealand, Australia, and Europe.

“We have a case of Democracy Fatigue that’s so severe, it almost feels fatal.”

In legal documents filed against Purdue Pharma, it is alleged that the company manufactured the opioid crisis for the express purpose of then marketing a second drug that could pull addicts from the brink of death. The company balanced “pain treatment” against “opioid addiction treatment” and noted that 40-60% of users relapse after only one treatment, opening up the potential for further profits. The company allegedly referred to naloxone as a “strategic fit” and a “complementary” product for Oxycontin:

It is an attractive market. Large unmet need for vulnerable, underserved and stigmatized patient population suffering from substance abuse, dependence and addiction.

Let’s develop a pill that will cure the Sackler family of their addiction to money.

SAN FRANCISCANS MOVE THE DEFECATION INDOORS…AND ONTO THE FLOORS
Once an epicenter of such exciting cultural phenomena as the AIDS crisis and the “Doodler” serial killer, San Francisco has taken a bit of a tumble and is only snatching headlines these days due to the fact that everyone’s pooping in the streets.

Now comes word from this misty little trend-setting city that at least one San Franciscan has decided to begin defecating in grocery-store aisles, too.

The perp is a white male with pasty thighs who decided it’d be a good idea to pull his pants down at a local Safeway supermarket, lay some cable on the floor, and then take the time to wipe himself. This implies that he at least had enough time to steal some toilet tissue before “sharing” this intimate slab of his insides with the world. Observers also confirmed that the bathrooms in the store were open, but the foul beast who passes as human decided to avail himself of the floor instead.

Don’t expect the city’s new DA to reverse this trend, either. Chesa Boudin is a gap-toothed weirdo who was raised by members of the Weather Underground. He was elected DA based on a promise not to prosecute “quality of life crimes” such as doing one’s doo-das on a supermarket floor.

Remember this lest you ever forget that City Hall is behind the literal shit show that San Francisco has become.

FLASHING MEME GIVES JOURNALIST SEIZURE; NOW HE SEEKS TO SEIZE PERP’S ASSETS
Kurt Eichenwald is a lumpy, grumpy, potato-shaped shlub who gets paid to express his opinions, even though they are dull and unoriginal. He is also an epileptic, but so are some of our generation’s greatest writers.

Back in late 2016, after Eichenwald made some untoward comment about President-Elect Donald Trump being some kind of big bad mean awful person, he became the target of a certain Texas man named John Rayne Rivello, who made the following comments to other Twitter users in private using his account “@jew_goldstein”:

[Eichenwald] deserves to have his liver pecked out by a pack of emus.

I hope this sends him into a seizure.

Let’s see if he dies.

I know he has epilepsy.

On December 15, 2016, Rivello sent Eichenwald a “GIF that strobed violently across his computer screen, flashing a red, yellow and blue geometric pattern behind the words ‘YOU DESERVE A SEIZURE FOR YOUR POSTS.’”

Eichenwald had a seizure and claims he would have died if his wife hadn’t discovered his unconscious bulk only moments later.

The FBI also found screenshots where Rivello had altered Eichenwald’s Wikipedia page to where the date of his death was the day he received the strobe-lit meme.

According to a brief filed on Eichenwald’s behalf:

A brawler who tattoos a message onto his knuckles does not throw every punch with the weight of First Amendment protection behind him. Conduct like this does not constitute speech, nor should it. A deliberate attempt to cause physical injury to someone does not come close to the expression which the First Amendment is designed to protect.

On January 31, Rivello is expected to plead guilty to aggravated assault. It’s probably the right thing to do, even though we find it physically impossible to feel bad for Kurt Eichenwald.

ANTI-RACIST POTTY TRAINING IN COLORADO
Racism can be conscious and unconscious. Anti-racist lecturers want to talk about your unconscious racism, because, unlike you, they’re conscious about it. The racist things that go on in your unconscious are sickening to them, and they’re here to make you feel ashamed about them—even though you’re unaware of them.

Coloradans apparently are guilt-stricken that their state is only 4.1% black—less than a third of the national average—and we are certain there are people in states all across this land who’d be willing to help Coloradans assuage their guilt by sending their black people there.

Regan Byrd is an “anti-oppression consultant” based in Denver. In case you haven’t guessed, she is extremely fat and black and wouldn’t be pretty even if she lost a lot of weight.

Regan—seriously, is there a whiter girl’s name than that?—seems to make quite a pretty penny browbeating people in this predominantly white state about racism, specifically about how they’re racist even if they don’t know it, and even if they are willing to be scolded about how racist they are, they’ll probably fuck it up anyway because they’re white and can’t possibly have an idea what it’s like to live in this racist society:

Being non-racist only exists under this individual-character status. Being anti-racist is, ‘I understand how racism works as an oppressive system and I’m actively working against that.’ And another distinction: You can be non-racist and contribute to a racist system. Because being neutral as a system rolls along means you’re contributing….I always like to say that some of the hardest work in anti-racism is convincing people who don’t think this is a problem that it is an issue. ‘Oh, I don’t talk to my racist uncle anymore.’ Doing that is not helping the work. White folks listen to white folks differently; that’s why allyship is important.

She seriously didn’t just pretend that “allyship” is a word, did she? Suddenly, after all these years, we’re becoming fully conscious of our racism—and we blame Megan Byrd.