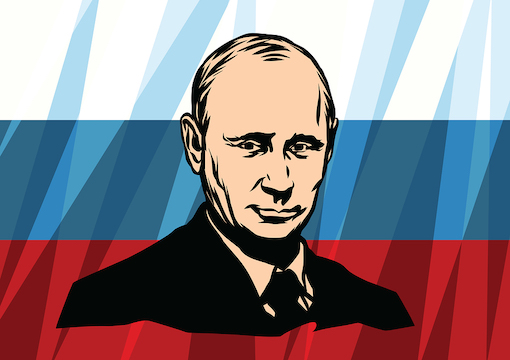 PUTIN MANEUVERS TO BECOME CZAR FOR LIFE
Even though he is barely 5’7”, Vladimir Putin has the sort of brute pectoral strength that has enabled him to hoist the mighty Russian Federation on his shoulders and carry it every year since the new millennium’s dawn.

Due to Russia’s two-term limit for presidents, Putin served from 2000-2008, then pulled a Lurleen Wallace and installed his personal hand-puppet for four years, then managed to get the presidential term extended to six years instead of four, and has been serving as president since 2012, with his second new term finally expiring in 2024, in which case he will have ruled Russia for 24 years–longer than anyone since some guy named Stalin—who was even shorter than Putin is. There seems to be an inverse correlation between Russian rulers’ height and the length of their reign.

But still, it hasn’t been enough power for Putin. This is because he is an extremely macho man:

Putin cultivates an outdoor, sporty, tough guy public image, demonstrating his physical prowess and taking part in unusual or dangerous acts, such as extreme sports and interaction with wild animals….Notable examples of Putin’s adventures include: flying military jets, demonstrating martial arts, riding horses, rafting, and fishing and swimming in a cold Siberian river, many of which he did bare chested. Other examples are descending in a deepwater submersible, tranquilizing tigers and polar bears, riding a motorbike, co-piloting a firefighting plane to dump water on a raging fire, shooting darts at whales from a crossbow for eco-tracking, driving a race car, scuba diving at an archaeological site, attempting to lead endangered cranes in a motorized hang glider, and catching large fish.

As if it hasn’t been enough of an aphrodisiac ruling Russia since the year 2000, Putin now endorses re-jiggering the Russian constitution in a way that would enable him to serve all the way until 2036, by which time he will probably have figured out the secret of immortality and how to rewrite the constitution so that he can serve for a minimum of 10 million years.

Putin isn’t calling for an extension of term limits—no, the new proposal would allow for some kind of imaginary “reset” where it’s as if he never served as president at all and now has a shot at two more six-year terms.

The idea was proposed in the Russian parliament by 83-year-old female ex-cosmonaut Valentina Tereshkova, a mannish, lantern-jawed space traveler who is a dead ringer for Vladimir Putin in lipstick and a wig. Then, in some amazing coincidence, Putin suddenly appeared before parliament to say, “Hey, cool idea, how do we make this happen, sis?”

The amendment, along with other proposals that would define marriage as a heterosexual thing and a pledge of homage to “ancestors who bequeathed to us their ideals and a belief in God,” was swiftly passed by a vote of 382-0, because if you don’t do what they tell you to do in Russia, they spike your coffee with plutonium.

GOOKS, SLANTS, AND SLOPES TARGETED FOR VIOLENT CORONAVIRUS-REVENGE ATTACKS
Over a month ago, we warned you all not to be racist about the coronavirus.

In New York City, police are seeking to pin hate-crime charges on a black man who was videotaped screaming at an Asian man on the subway and spraying him with Febreze. When an onlooker asked him why he was engaging in such dastardly antics, he said that the Asian man was standing right next to him, implying that Asians all have the coronavirus and just can’t wait to infect hostile black straphangers with it.

In Fresno, some poor Asian man, very likely diminutive and underendowed where it counts, awoke to find graffiti that said “FUCK ASIONS [sic] AND CORONYVIRUS [sic].” Nothing irks us more than grammatically incompetent hate criminals. We don’t even care about “hate,” but proper spelling is very important.

In the Los Angeles area, perhaps spurred into action by genetic memories of black-on-Asian violence during the 1992 Rodney King riots, many Asians are stocking up on guns to protect themselves against yet another wave of racially motivated and frankly unacceptable attacks.

In London, some slant-eyed guy named Jonathan Mok says he was assaulted by a mob of indigenous British thugs, one of whom allegedly shouted “I don’t want your coronavirus in my country” while trying to land a kick.

Please stop attacking the Asians. At the very least, try to hide the fact that you’re attacking them for being Asian.

THERE’S ACTUALLY A DUTCH KING, AND HE JUST APOLOGIZED TO INDONESIA
Were you aware that the Dutch had their own king?

But apparently he’s real, and he still has a full head of hair and obviously eats well.

“We don’t even care about ‘hate,’ but proper spelling is very important.”

At one juncture in the distant past, the Dutch were so healthy and robust that they moved beyond their own national boundaries and ruled the constellation of humid islands known as Indonesia—for centuries!

This all came crashing down in 1945 when the locals, obviously egged on by hostile cosmopolites, cast off their Dutch shackles and declared their independence. There were squabbles and skirmishes, one involving the torture-murder of an Indonesian that left him with cigarette-burn scars and a dent in his skull.

Now, 75 years later and when it’s far too late to actually do anything about it, Dutch King Willem-Alexander has formally apologized for any and all atrocities that the Dutch may or may not have committed during their three centuries of stepping on Indonesian necks.

As far as we can tell, he did nothing more than apologize. He didn’t resurrect the victim from the dead or offer anything in the way of monetary compensation. He merely said, “Hey, even though I had no part in this, I want you to know I really feel bad about it, and I hope that feeling bad about it will make you feel better about it.”

Beware of anyone who apologizes without also handing you a check for a million dollars.

PUBLISHER CANS WOODY ALLEN MEMOIR DUE TO PEDO ALLEGATIONS
Woody Allen is a comedian who differs from Larry David in that, to our knowledge, no one has accused Larry David of being an incestuous pedophile—at least not yet.

But according to a French book publisher, Allen “was entirely cleared on two occasions by the American courts, by judicial experts, by psychiatrists. My conviction is that he is entirely innocent of the accusations against him.”

Because of this, it’s not legal to call Allen a pedophile. But apparently it’s still legal to act like he’s a pedo. Last week the publishing house Hachette announced that although it had planned to publish Allen’s memoir called Apropos of Nothing, it would not be appropriate due to the fact that despite being cleared of all charges, some people simply need to see others as pedophiles in order to expunge some of their own weird guilt trips and secret proclivities. Hachette announced that it was dropping Allen’s book after several staff members staged a walkout.

What would happen if we started a rumor that William Shakespeare was a date rapist? Forget we even asked.

SHEIKH MOHAMMED-SOMETHING-OR-OTHER OF DUBAI ACCUSED OF KIDNAPPING HIS OWN FRICKIN’ DAUGHTERS
The vice president of the United Arab Emirates, some dune coon named Sheikh Mohammed bin Rashid Al Maktoum has a face that could make baby camels cry. He’s also worth $4.5 billion, which means he can basically bag any babe he desires.

As if it wasn’t humiliating enough that his own wife cuckolded him by banging one of her bodyguards, the sheikh has a problem with at least two of his daughters fleeing his clutches as if he was some kind of sadistic control freak or something.

To quell the rumors of him being tyrannical, he allegedly arranged for his daughters Sheika Shamsa and Sheika Latifa to be forcibly kidnapped and returned to him so he could talk some sense into them and kindly ask them to stop spreading such obviously fake news.

Latifa in particular is such an ingrate that in 2018 she uploaded a video to YouTube alleging that her daddy had imprisoned her for three years:

HARVEY WEINSTEIN SENTENCED TO 23 YEARS IN THE STONY LONESOME
Harvey Weinstein is a lumpy, potato-shaped sex pest who, according to a woman who claims to have had unpleasant sexual relations with him, has no scrotum and a severely scarred penis.

Last week he was handed a 23-year prison sentence after being convicted of rape and sexual assault. Without a hint of irony, one reporter referred to the sentence as “stiff.”

Weinstein stood up from his phony walker long enough to deliver the following statement:

First of all, to all the women who testified, we may have different truths. I have great remorse for all the men and women going through this crisis right now in our country….You know, the [#MeToo] movement started basically with me, and I think what happened, you know, I was the first example, and now there are thousands of men who are being accused and a generation of things that I think none of us understood…. I’m totally confused and I think men are confused. I’m worried about this country in a sense, too. I really feel remorse of this situation. I feel it deeply in my heart.

Weinstein fondly recalled that he had “wonderful times” with all of his rape accusers.

Seems like a nice guy. Why all the hate?

FRENCH SMURFS DEFY DEADLY PANDEMIC, MAY DIE ANYWAY
Amid the global madness inspired by the coronavirus one whimsical mayor who dares to dream is encouraging us to gather together in large numbers to show the world we ain’t scared.

Patrick Leclerc is the mayor of the small French town of Landerneau, and he wants the world to know that he will not be dissuaded by the cloud of “ambient gloom” that has settled over his nation as a result of the pandemic. A mere day before the French government banned any public gatherings of 1,000 people or more, Leclerc allowed his village to be besieged by an estimated 3,500 adults in blue Smurf makeup who were trying to break some world record regarding the largest number of human Smurfs gathered together in one place. “We must not stop living,” Leclerc insisted.

Still, as of this writing, nearly 5,000 people have stopped living as a result of the novel coronavirus.