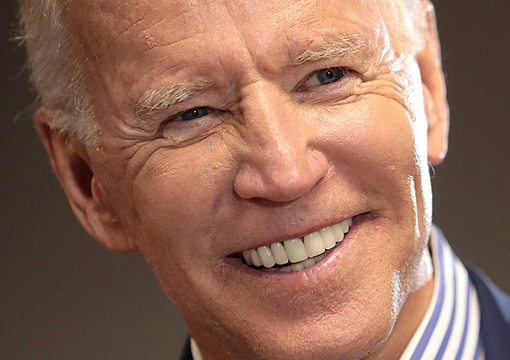 BIDEN: BELIEVE ALL WOMEN (UNLESS THEY’RE ACCUSING ME)
Although everyone and their stepmom believes that Joe Biden is senile, creepy, and rapey, a gut feeling cannot produce a criminal conviction—especially when the accuser contradicts herself.

Such is the case with one Tara Reade, a former Biden staffer who waited over a quarter-century to accuse Biden of digitally penetrating her way back when she was somewhat desirable to the average man.

Even a year ago, Reade accused Biden of getting all touchy-feely but that she didn’t consider such acts to be “sexualization.”

It was only in March of this year when an apparently attention- and sympathy-starved—but visibly well-fed—Reade told a podcaster that Biden slammed her against a wall and within moments had his fingers rammed deep up inside her coochie—no mean feat, considering not only the mysterious placement of the female genitalia but the assumption that Reade was not fully lubricated when the alleged assault happened.

Reade also insists she told coworkers about the assault around the time that it happened. She also said she filed an official report to the Senate’s personnel office regarding this matter. But—OOPS!—she didn’t save a copy of the report, the Senate says they couldn’t release such a report even if it existed because it’s confidential, and no coworkers have yet come forth to corroborate her story.

So as far as we can tell from the available evidence, either Tara Reade is lying or she is one of the most inept accusers in #MeToo history. We wouldn’t even be surprised if she had been hired by the Biden campaign to discredit all the other allegations of him clawing at women against their will.

This doesn’t mean that the Democrats aren’t being massive hypocrites about all this. It was during the Brett Kavanaugh hearings that Rapey Joe came forth and said that it takes such tremendous courage for a woman to step into the lovingly sympathetic spotlights and attempt to forever ruin a man’s life that she should be believed right out of the starting gate.

And the same Democratic ladies who aggressively tried to #MeToo the male gender into extinction are saying that they believe Joe and not the woman. And the same Democratic network mouthpieces in the media who leapt like ants on candy to investigate every last alleged sexual indiscretion of Donald Trump have not touched Reade’s allegations of Biden’s touchiness. We get it—politicians and their water-carriers in the media are hypocritical. What we don’t get is why you still act surprised and upset about this.

When grilled about his apparent hypocrisy by Mika “Daughter of Zbigniew” Brzezinski, Biden hemmed and hawed and stammered through this:

Women are to be believed given the benefit of the doubt. If they come forward and say something that they said happened to them, they should start off with the presumption that they are telling the truth, then you have to look at the circumstances and the facts. The facts in this case never happened. There are so many inconsistencies in this case. Look at the fact. I can assure you it did not happen, period, period.

Wait a minute—if it didn’t happen, how did she know she was on her period when it happened? Something about this smells fishy, and maybe it’s not Tara Reade.

POMPEO: “ENORMOUS EVIDENCE” CORONAVIRUS WAS LAB-CREATED
Mike Pompeo is a big fat Italian guy who looks like he’s eaten three hoagies a day since infancy. Donald Trump initially appointed him to be the CIA Director and then moved him over to Secretary of State. When quizzed by some dried-up busybody at ABC News whether he’d seen anything that gives him “high confidence” that SARS-CoV-2 originated at the Wuhan Institute of Virology rather than the wet market that was within spitting distance from it, he said:

Martha, there is enormous evidence that that’s where this began. We’ve said from the beginning that this was a virus that originated in Wuhan, China. We took a lot of grief for that from the outside, but I think the whole world can see now. Remember, China has a history of infecting the world and they have a history of running substandard laboratories….These are not the first times that we’ve had a world exposed to viruses as a result of failures in a Chinese lab. And so while the Intelligence Community continues to do its work, they should continue to do that and verify so that we are certain, I can tell you that there is a significant amount of evidence that this came from that laboratory in Wuhan.

The Chinese Communist Party’s official news organ Global Times encouraged Pompeo to produce his evidence and insinuated that since he has failed to do so, he is clearly “bluffing.”

The Chinks have a point: Claiming that there’s “enormous evidence” without providing the evidence is sort of like claiming you have a gigantic penis without whipping it out for all to see.

“Something about this smells fishy, and maybe it’s not Tara Reade.”

EVIL ASIAN “MURDER HORNETS” INVADE USA
As if the Chinese weren’t causing enough ruckus in the USA already, now come reports that two-inch Asian “murder hornets” have been spotted in Washington State. Not only can they kill humans by repeatedly stinging them, they also have a fondness for attacking beehives and killing every last bee, even when the bees outnumber them 1,000 to one. And these terrifying beasts are undeniably Asian, all the way down to their slanted eyes.

How many more deadly viruses and insects will it take before we as a nation realize that Asians don’t like us?

WOMAN: MOUTH HOLE IN FACE MASK “MAKES IT A LOT EASIER TO BREATHE”
No one in world history has ever accused Americans of being too intelligent. Case in point: At an S J Food Mart in Lexington, KY, a female customer recently walked in to pay for gas wearing a face mask with an cut-open hole for her mouth because it makes it “easier to breathe” that way.

In a sense, she’s right. With that hole open near her mouth, it’s much easier to breathe in aerosolized droplets containing the coronavirus. Sure, if you want to get technical, it gets a lot harder to breathe from that point on—some reports suggest COVID-19 can cause permanent lung damage—but for a lonesome minute, that lady was right.

In other tales of Covidiocy, a Florida church that claims it’s not a church has been issued a preliminary injunction to stop selling a reputedly COVID-curing bleach product that it insists isn’t a bleach.

MAN WEARS KLAN HOOD IN SUPERMARKET, ENTIRE COUNTY FREAKS OUT
When it isn’t busy being the most boring large city in the United States, San Diego busies itself accepting wave after wave of feral five-foot-tall criminals pouring in from the border with Tijuana a mere 20 miles to the south. San Diego County is a sprawling area of nearly 5,000 square miles that is the fifth-most-populous county in the USA. Santee, CA is a small town smack-dab in the middle of that massively bland county. A week or so ago, a man clad in a white KKK hood appeared at a Vons supermarket, and San Diego County has yet to recover. It may take years. Hell, it may take a century. The ADL even chirped in, saying that San Diego is no place for hate, unless you’re a white man deemed to be a hater, in which case you should be hated and hunted and shunned and broken. It matters not that this was probably the funniest thing ever to happen in San Diego County.

FRENCH LEFTISTS KEEP SMASHING AND BURNING THINGS
French leftists—those two words just multiply one another’s awfulness—are filling up with even more rage than usual because the COVID-19 lockdown prevents them from smashing things. If you understand leftism at all, it’s about destroying what has already been created. They hardly ever address what they’ll do after everything is in smoldering ruins, but they love when things burn and get smashed and get blowed up real good.

Claiming that it has something or other to do with fighting the very capitalism that has enabled them to be weak, lazy, tantrum-throwing Peter Pans, they’ve taken to attacking “telephone masts, banks, businesses and government property across France.”

The frustration will all end on May 11, when the lockdown is lifted and France’s leftists are free once again to smash and loot and burn and bomb without fear of receiving a written citation for violating the lockdown.

NIGERIA’S PRESIDENT APPOINTS ANOTHER DEAD MAN
Anyone familiar with Nigeria knows it is a place of wonderment and enchantment. That’s why it came as no surprise to hear that when the country’s president—who looks like this and has a name that sounds like “Muhammad Ooga-Booga” or somesuch appointed a man whose name was—get this—”Tobias Chukwuemeka Okwuru” to some government position where he would likely fleece the peasantry and cavort with hookers on private jets, it turned out that the appointee had already been dead for a year. In 2017, Nigeria’s president appointed five separate dead people to government positions. He’s also had to quash persistent rumors that he himself had died and been replaced by a body double from Sudan. Africa is so endlessly magical that we’d move there, if only it wasn’t Africa.