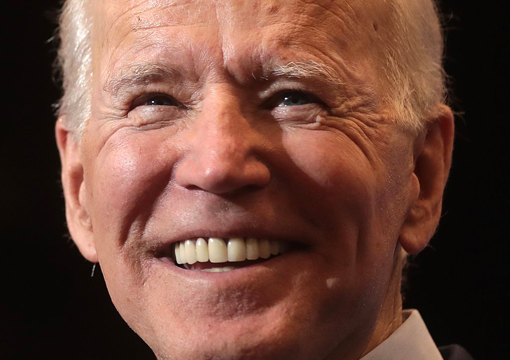 Would you rather have a rapist or an Alzheimer’s patient as your president?

If Joe Biden gets elected, you may wind up with both, but it’s an important question and a crucial distinction.

Despite all you hear about Donald Trump being a rapist, I’ve never seen a single video clip where he’s pawing and rubbing and sniffing and forcefully embracing one mortified female after the next like you constantly see with Joseph Robinette Biden, Jr. His touchy-feely proclivities are all there on video, whereas the germaphobe Trump always keeps a respectful distance.

And either way, Trump did get elected after the “grab ‘em by the pussy” scandal. It’s not as if constantly being called a rapist OR a racist are deal-breakers for the American electorate.

Being able to read body language, it seems clear as a bell to me that Joe Biden thinks black people are subhuman apes and considers women to be the sexual equivalent of wall sockets. He and I grew up in the same part of the Northeast and in the same Irish-Catholic milieu. I’ve seen the type. He’s the sort of guy who will say, “Hey, man, why you gotta get so upset?” while he’s raping and/or lynching you.

And that’s fine, I guess. Free country and all. If he thinks it’s cool to enslave blacks and finger-bang women against their will, I believe that’s covered by the First Amendment until he puts it into action.

Biden’s problem, though—apart from the galloping senility—is that he’s the current standard-bearer for a party that rallies against the very idea of white males and holds blacks and females in such preposterously high regard, Biden will likely choose the snarling, gap-toothed choco-armadillo Stacey Abrams as his running mate.

“Would you rather have a rapist or an Alzheimer’s patient as your president?”

As a result of this, and despite the fact that he’s Mr. Hands with any woman who comes within coronavirus striking distance of him, in 2018 Biden said that we need to believe women when they accuse men of taking sexual liberties with them:

For a woman to come forward in the glaring lights of focus, nationally, you’ve got to start off with the presumption that at least the essence of what she’s talking about is real.

Whether his stance was insincere or merely opportunistic, what is one to make of the fact that, six months before Biden uttered those sanctimonious words, a brown-skinned former Nevada Assemblywoman named Lucy Flores described a 2014 encounter with Biden thusly?

As I was taking deep breaths and preparing myself to make my case to the crowd, I felt two hands on my shoulders. I froze. ‘Why is the vice-president of the United States touching me?’…I felt him get closer to me from behind. He leaned further in and inhaled my hair. I was mortified. I thought to myself, ‘I didn’t wash my hair today and the vice-president of the United States is smelling it. And also, what in the actual fuck? Why is the vice-president of the United States smelling my hair?’ He proceeded to plant a big slow kiss on the back of my head. My brain couldn’t process what was happening. I was embarrassed. I was shocked. I was confused. There is a Spanish saying, ‘tragame tierra,’ it means, ‘earth, swallow me whole.’ I couldn’t move and I couldn’t say anything. I wanted nothing more than to get Biden away from me. My name was called and I was never happier to get on stage in front of an audience.

In response to Flores’s comments, last year another woman from Nevada named Tara Reade walked away from her cats and the darkness of obscurity to tell a newspaper that Biden had acted similarly to her in 1993:

He used to put his hand on my shoulder and run his finger up my neck. I would just kind of freeze and wait for him to stop doing that.

Notably—actually, I’m the one noting it because hardly anyone else has—the article says, “Reade said she didn’t consider the acts toward her sexualization.”

Get that? She said he ran his finger up her neck but she didn’t consider his behavior sexual.

But then last week, either starved for justice or attention or both, Reade consented to a podcast interview where she accused Biden of pushing her up against a wall and inserting his bony white fingers inside her lady bits:

I remember the assault itself, and then the aftermath, and the reverberating effects of that….He was, at first, talking to someone, they went away, and then he said ‘Come here,’ and then when I gave him the gym bag….And I remember he–it happened all at once–the gym bag, I don’t know where it went. I handed it to him and it was gone. And then his hands were on me and underneath my clothes. And then he went–he went down my skirt and then up inside it. And he penetrated me with his fingers, whatever. And I–he was kissing me at the same time and he was saying something to me. He said several things and I can’t remember everything he said. I remember a couple of things. I remember his saying, first, like as he was doing it, ‘Do you want to go somewhere else?’ and then him saying to me, when I pulled away, he got finished doing what he was doing and I, how I was pulled back and he said, ‘Come on man, I heard you liked me.’…And he said to me, when he pulled back, he pointed his finger at me, he said, ‘You’re nothing to me. You’re nothing.’ And he straightened his clothes and he went away…. He was this champion of women’s rights in my eyes and I couldn’t believe it was happening. It didn’t seem–it seemed surreal. I just–I knew–I just felt sick.

We feel sick, too—not even so much at the sexual assault, but at the hypocrisy.

But if you’ve spent the merest amount of type studying political behavior, you’d realize that voters don’t care about hypocrisy. They care about vitality.

And if you pore over political behavior like I do for a living, you’d also realize that the elderly are the only group that everyone across the political spectrum feels entitled to openly hate and dehumanize. The reasons they give to justify this hatred are even dumber than the “reasons” people give for believing in astrology, but as Winston Churchill famously noted, most voters are dumber than foot fungus.

This is my conspiracy theory, and I know it won’t be popular, but I implore and beseech ye to give it a fair hearing:

I believe the DNC is pushing the “Joe is a rapist” narrative because it’s better than the “Joe is senile and wears adult diapers” narrative.

Biden is always forgetting where he is and spitting up all over himself. Either his dentures are falling out of his mouth or he’s falling asleep in public or he’s nibbling on his wife’s fingers like a dementia patient or his eyeball is suddenly filling with blood like his body’s falling apart on live television.

Even if it was only a brief finger-bang nearly three decades ago, it’s something. In the public mind, it restores his virility and depicts him as virile, manly, and studly rather than creaky, decrepit, and impotent. Thinking of Biden endlessly macking on women is much more flattering than thinking of him soiling his adult diapers during a presidential debate.

He may occasionally grab ‘em by the pussy, but at least he won’t press the nuclear button thinking it’s a video game.

Rapey Joe might win the election, whereas Sleepy Joe doesn’t have a chance.