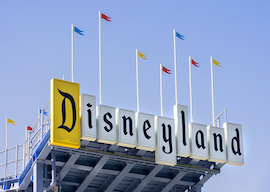 Parkgoers enjoyed a heartwarming spectacle at Disneyland’s Anaheim location last weekend. It all started in extremely implausible circumstances, when a young black man felt that he and his daughter had been “disrespected,” something he warned a certain supernaturally fat black woman not to do. Ah, in vain. For she proceeded to spit in the poor man’s face, whereupon he cursed at her and punched her several times. Then another black man—presumably her baby’s daddy—got involved, gallantly slugging the other fellow.

What followed seemed like it was taken from the pages of National Geographic, the disrespected man doing a kind of elaborate fighting dance while taunting his opponent with sublime pride—“What’s up?!” and “What’s happenin’, bro?!”—before he and the bro traded haymakers.

Basking in their privilege, the white onlookers recalled black comedy skits from the ’80s in which blacks mock the extravagant manner in which they fight, in order to intimidate honkies. Several whites captured the melee on their iPhones, and some of the footage will be used in the upcoming documentary on the American melting pot, What Happens in the Wild.

“Hold my daughter,” the rotund black woman ordered a convenient stranger nearby, who hoped she would not be obliged later to adopt the excited little demon who managed to throw some animal crackers in the direction of the scuffle.

The fight now became rather complicated, for the black woman was joined by another sister, so that there were four persons swinging wildly at one another, all while trying not to slip on the gathering puddles of cocoa butter and the fat black woman’s sweat below them. There was even more profanity, even more evidence for white liberals that diversity is our strength.

“I’m ready to go to jail tonight!” declared the disrespected man thoughtfully, who perhaps had been there before. “I don’t give a fuck ’bout no video! You put yo’ hands on muh bitch, nigga!” he added in the elegant African-American vernacular. For her part, the bitch was charmed by this chivalry, and made a mental note to reference it during her next spoken-word performance.

“Let the divine black beatings of whites begin at once.”

The violence went on for several minutes, until some white people, meddlesome as ever, infringed on the black efforts to administer justice among themselves, a high school football coach and some others breaking up the rumble in Disneyland. During the course of this, the disrespected man was choked out and briefly lost consciousness. But happily, upon coming to, his virtuous character remained intact, as he repeatedly demanded to know who had choked him out—was it not a cop?—and was eager to settle the score.

According to police officials, “all parties were from the same family and were uncooperative.” Perhaps they will resolve the matter at their next family reunion, which might be broadcast live at the Claremont Institute, in order to demonstrate once and for all the value of “the American idea.”

None of the family members were arrested, though they were eventually removed from the park by Disney security. Where was Disney security throughout the fight? They were present, the video shows, but evidently afraid to intervene, despite all their “diversity training.”

Having refrained from arresting the oppressed blacks, the police are now conducting an investigation. The mother of some of the four brawlers, herself considerably fat, is disabled, and gets around via a taxpayer-funded motorized wheelchair. She was knocked to the ground toward the end of the fight, but it is not known whether anybody will be charged with a hate crime.

As if to please American patriots, another video went viral this week. Taken on July 4, it shows some sixty young blacks at a Walgreens in Philadelphia celebrating the holiday by looting the store. A cashier tried to intervene, but fortunately he was hit in the head with a glass bottle. Next time, perhaps, he won’t try to spoil the fun.

“Between the things that they stole and the property damaged inside, it’s between $6,000 and $7,000 in damage,” said Captain Kinebrew.

Surveillance video outside showed the ebullient young blacks stopping traffic and crowding and running along the street. The City of Brotherly Love? Quite so!

Like the fact that black men under 40, though they compose only about 4 percent of the population, commit more than half of all homicides, such stories attest to the singular black talent for violence. Meanwhile, white liberals are ever more masochistic, with hardly a day going by that they don’t profess themselves to be terribly guilty and wretched because they’re white. Well, then, is this not a lucky combination? To be sure, all black violence is attributable to white racism, and blacks have the right to vent the anger engendered by racism’s never-ending evil effects. Not that whites themselves should be expected to understand this, since in the words of Robin DiAngelo, the heroic pioneer of Whiteness Studies and an intellectual woman besides, when it comes to taking responsibility for white supremacy, “even a minimum amount of racial stress becomes intolerable [for whites], triggering a range of defensive moves.” Nevertheless, the racial situation in America is not an unhappy one. First, there is the growing support for white reparations to blacks, as advocated by Ta-Nehisi Coates, Kamala Harris, Corey Booker, and other national sages. And second, there is my own proposal, namely, that instead of perpetually fighting among themselves, blacks should use their formidable energy to punish their real enemy—that is to say, white people.

Every black person deserves a white person to punish, and on the days when a black is feeling particularly burdened by racism, he shall be permitted to punish two white people. Yet this being a Christian nation, punishment alone will not do; it must be preceded by confession, whites confessing to blacks, who might for the time be called “Masters,” exactly how they have been racist and benefited from their privilege. Thereupon the blacks shall administer punishment, be it a blow to the face, a kick in the teeth, a lash to the buttocks by means of a belt, or whatever. Here, of course, no concern for method is needed, given the black genius for violence.

Our time values nothing so much as efficiency, so the confessions and the beatings should be precise, methodical, and regular. Not to say too speedy, lest justice not be done. They might take place each Sunday morning after church. Better still, since church attendance, as Anthony Esolen gives us to understand, is asking too much of many a good American team member, the confessions and the beatings should replace church.

Dare we to hope that R.R. Reno, the celebrated editor of First Things magazine, will lend his entrepreneurial spirit—not to mention his commitment to education—to this endeavor? Reno having the manner of a used-car salesman, there is no better believer to render white atonement and black beatings profitable in every way imaginable. Consider, for example, the upcoming “Intellectual Retreat” being put on by First Things magazine in Manhattan. Seeing as one’s immortal soul is at stake, the $650 ticket is a great deal on virtue, which comes with a few cocktails and a couple of lectures besides. I myself hope to stop in on my way to Walmart.

I am likewise inspired by Reno’s campaign—or rather, “Higher Allegiance”—to raise $500,000 by early July, though I do wish that certain acquaintances of mine, including people who have written for the magazine, would stop insisting that the First Things crowd is worse than useless money-grubbing Christ-cucks who could not be less serious about the friend-enemy nature of politics. God willing, R.R. Reno will work with distinguished peers such as John Hagee and Joel Osteen to get the most out of the racial amelioration.

For there are important questions to be asked. To begin with, should the events be televised on pay-per-view? But then, these are hard times, and how would most Americans afford that? How to strike the right balance between profit and making the edifying punishment as widely viewable as possible?

At what age should the punishment begin? Is it ever too young to begin an education in virtue, to learn that you are guilty for being white?

Should the events transpire at the White House? Or, in view of Colonialism, would the United Nations building be more appropriate?

Certainly, the confessions and the beatings should happen in a large public setting, where the same righteous Christian public that cannot get too much of WWE wrestling and The Jerry Springer Show can pay good money to see, for instance, young black men from the South Side of Chicago beat white liberals from Hyde Park silly.

Of course, I shall not presume to answer the questions I have raised, because they are beyond the ability of my meager noggin to decide, but are the province of men who are guided by the Holy Spirit.

My proposal, let us hope, will prevent white liberals from wasting their precious time and energy on things that are unworthy of their benevolent characters. “The climate of vigilante violence on the right has elevated racist attacks, hate crimes, and terrorism in our political culture,” notes Corey Pein in a recent article in The New Republic. Therefore, although

Liberals are notoriously loath to take their own side in a fight…their reticence may well be changing in an age of vigilante, white nationalist terror—openly condoned and supported by an incumbent president who has suggested that his armed devotees won’t stand for his removal from office.

many leftists and even some liberals are beginning to reconsider their feelings about firearms, joining a loose amalgamation of gun groups, from John Brown Gun Clubs (which take their name from the abolitionist) to the Pink Pistols (an LGBTQ group), Liberal Gun Club, and Socialist Rifle Association.

Doubtless that groups such as the Pink Pistols and Liberal Gun Club terrify deplorables from Portland to Virginia, and could be especially useful for the white punishment project. But considering all the progress white liberals have effected in this country since the 1960s, we cannot allow them to risk their lives fighting white supremacy—we need these special persons to keep improving everything from academia and media to Hollywood and the government itself. Besides, what good would white liberals be doing for blacks by battling deplorables in the streets? Finally, blacks occupying the lowest rung of the intersectional totem pole, their right to punish white people has the greatest claim to justice, and to this end no white lives can be put at risk.

To conclude, then, let the divine black beatings of whites begin at once. Let whites confess to their black Masters all their racism and all their privilege. Let all this go on as long as necessary and with God’s blessing. Amen.