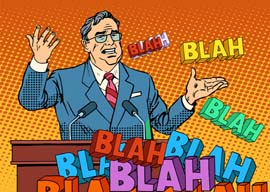 Staying up all Monday night to write a column for publication Wednesday morning is a tricky business when elections fall on a Tuesday.

First, Hispandering. While we still have Marco Rubio to kick around some more, let’s ponder just how badly the conventional wisdom has failed regarding the candidacies of Rubio and, to a jaw-dropping extent, Jeb Bush.

After Mitt Romney’s loss in 2012, the Republican Party establishment quickly proclaimed that the remedy to what ails them was exactly what the Democrats and liberal media had been advising: amnesty for Hispanics.

GOP leaders recruited young Senator Marco Rubio to be the Republican face of a bipartisan “comprehensive immigration reform” drive. Time put Rubio on the cover of its Feb. 18, 2013, issue as “The Republican Savior“; after all, there’s nothing more inspiring than an ethnic politician demanding special favors for his ethnicity!

Meanwhile, big-money insiders poured cash into the presidential campaign of Jeb Bush because he was both a dynast and a Hispanic-in-law. (A third presidential candidate, Ted Cruz, benefited modestly from having a surname ending in a “z,” although Cruz made less effort to claim the Latino mantle.)

But somebody forgot to send the memo to GOP voters. Jeb’s idea of campaigning among Americans on his love of Mexicans proved a historic fiasco, while Rubio’s admittedly less absurd campaign has repeatedly failed to take wing.

He may still wind up with the nomination so often predicted for him. But his sponsorship of the amnesty bill with Chuck Schumer (D-NY) has been a deadweight dragging him down, even thought the media have hated to admit their mistake. For example, The Washington Post ran a lengthy autopsy on the Rubio campaign on March 6, “Some Supporters of Rubio Say Bad Strategy, Poorly Run Campaign Killing His Chances,” without ever mentioning the I-word.

“Can a candidate appeal to whites who live loud while still retaining the indoor-voice whites?”

Second, expanding the map. Republicans in recent presidential elections have narrowly lost large numbers of electoral votes in the Great Lakes region, the part of the country traditionally covered by the Big Ten college football conference. Romney won at least 45 percent of the vote in Michigan, Ohio, Pennsylvania, Wisconsin, Iowa, and Minnesota, but still lost all 80 of their electoral votes. Why? Because Romney carried only 52 percent of the white vote in these six states, and a terrible 47 percent of white voters who hadn”t been to college.

Donald Trump has spoken out for a protectionist industrial policy that at least theoretically should appeal to voters” self-interest in these Rust Belt states.

A big question, however, is whether Trump’s brazen Noo Yawk personality appeals enough in the soft-spoken Upper Midwest. So far, he has failed to win over Republican caucuses in Iowa and Minnesota, which are perhaps the two places with the most understated affects in the country. (See the Coen brothers” Fargo for illustration.) Tuesday’s Michigan primary should be a good test of whether Trump’s extreme East Coast style works for voters in the old industrial heartland.

Third, identity. The Republicans have done a decent job in 21st-century presidential elections of getting Republican-type voters”i.e., married middle-class homeowners who see themselves as the core of the American nation”to turn out and vote for them. The fundamental problem for the Republicans, however, is that their policies haven”t been creating more Republican-type voters. Instead, the two parties have mutually presided over programs making the electorate more marginal and more resentful of the Mitt Romney-like Republican types, which is good for Democratic presidential candidates (if nobody else).

Let’s review why Trump’s rise has so surprised the professionals. The understandable reason for how the experts got the big picture wrong is that it’s been pretty easy to predict elections recently because the first four presidential contests of the 2000s were so geographically and demographically stagnant. While the final outcome could be in doubt, the structure of where the two parties would get their votes was mostly not.

Since identity changes only in slow, predictable patterns, elections have been relatively easy to forecast. Nothing ever changes (until it does).

The terms “red state” and “blue state” came into existence during the five-week vote-counting ordeal after the 2000 election. Before 2000, media outlets had routinely flipped the color of Republican and Democratic states on the whims of their graphic designers. After all, states tended to swing from Republican to Democrat and vice versa fairly regularly in the second half of the 20th century, so red-blue maps had been disposable. (In retrospect, the 21st-century red-blue stereotype was starting to get locked into place by 1988, but Ross Perot’s third-party bids in 1992 and 1996 muddied the map. Thus, few noticed the emerging regional pattern until 2000.)

In the 21st century, however, Republicans have won most of their electoral votes in states with inland metropolises with relatively low land prices (for example, Dallas”Fort Worth rather than San Francisco), which make family formation more affordable. Not surprisingly, the family-values party appeals more to voters with families.

Right after the 2004 election, I pointed out that the best predictor of how blue or red a state was in both 2000 and 2004 was how many years the average white woman in the state could expect to be married between 18 and 44. In 2004, Bush carried all of the top 25 states on this metric.