The Orations of Monica Lewinsky 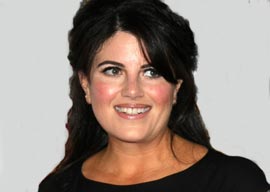 That Monica Lewinsky got a standing ovation after giving a speech isn”t the part of the story I”d have picked for my headline.

It would be news if Monica”or your second grader, or the cast of a tepid community theater production of Carousel“didn”t get one. Formerly reserved for those rare instances when mere applause seemed insufficient, the standing ovation morphed into just another hollow social obligation some time ago.

As evidenced in this video, Lewinsky is a passably poised and polished speaker, in the ever-so-slightly stilted manner of a perpetual runner-up pageant contestant. But her oratory wouldn”t have brought anyone except her own parents to their feet in any era but our own.

That Monica spoke at the Cannes Lions International Festival of Creativity wasn”t surprising, either. This is the advertising-industry body that hands awards to whichever slick, innuendo-stuffed Eurotrash commercials are least likely to air on U.S. TV because Americans are so prudish and uptight, etc., soooo sleeepppyyy zzzzzzz….

“I can”t prove it, but I”d bet more people committed suicide over the untimely, decidedly pre-Internet deaths of Rudolph Valentino and James Dean than have offed themselves because somebody called them a slut on Twitter. “

So Lewinsky”whose name, she reminds us early in her address, is dropped in over 40 rap songs as lyrical shorthand for fellatio“wasn”t a particularly startling choice of speaker. And on that (largely mythical) puritanical front, recall Robin Williams imagining the French shrugging off the presidential scandal that made Monica an overnight celebrity: “So what did he do? F—- a chicken?”

And it’s the topic of “overnight celebrity” upon which Lewinsky expounds, as befits her newish identity as an anti-cyberbullying activist. (Her previous incarnations as author, accessories designer, and television performer having since fizzled.)

Monica described herself to the Cannes crowd as “patient zero” of a disease that once”nearly 20 years ago”had no name: cyberbullying, or online public shaming, the phenomenon “of losing a personal reputation on a global scale almost instantaneously” through the machinations of the nascent Internet.

In Monica’s mind, the Drudge Report”which broke the story of her affair with President Clinton and immediately became (and stayed) one of the biggest sites on the Web”was her digital pillory. Her name became a byword among the nations. She contemplated suicide.

Lewinsky is quick to couple her non-death with an actual one, to show how fatal such shaming can supposedly be. Although less familiar than hers, the name Tyler Clementi has also become a synonym of sorts, this time for the “epidemic” of cyberbullying-induced suicide.

Except that, in The New Yorker of all places, back in 2012, we learned this about poor Tyler Clementi:

It became widely understood that a closeted student at Rutgers had committed suicide after video of him having sex with a man was secretly shot and posted online. In fact, there was no posting, no observed sex, and no closet.

Lewinsky seems unaware or unconcerned with the facts of that case, in which the real victim of bullying was Clementi’s roommate, who was charged with”you guessed it”a “hate crime.”

And of course, no such suicide epidemic exists except in the fevered imaginations of professional victims and activists like Monica. Let’s call this industry”what else?”Big Bully.

I can”t prove it, but I”d bet more people committed suicide over the untimely, decidedly pre-Internet deaths of Rudolph Valentino and James Dean than have offed themselves because somebody called them a slut on Twitter. But then, Big Bully can”t prove any of its claims either, yet continues to metastasize.

Having watched, by sheer coincidence, the 1945 production of The Picture of Dorian Gray on TCM last night, I was struck by Monica’s appearance in this TED-like talk. She still wears her hair and makeup the same way she did two decades ago, and appears not to have aged terribly much. But if that’s evidence of some sort of deal with the devil, it clearly hasn”t worked out. She is still unmarried and childless, and now, at 41, her chances of altering her status drop daily.