The Public Execution of a Manwhore 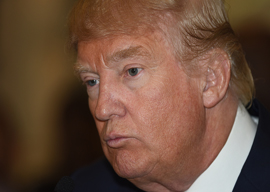 For me, the most disappointing takeaway from the Donald Trump Access Hollywood tapes was his stark admission that a woman once turned down his sexual advances. Even more disheartening was that he chose to clumsily apologize after his “extremely lewd” comments were made public.

Suddenly he didn’t seem so invincible. Alpha males are supposed to get all the women, and they certainly never apologize for viewing beautiful women as sex objects.

The 2005 hot-mic recording, which dropped like an H-bomb on Friday, features Trump and”coincidence?”Bush family member Billy Bush talking like normal dudes talk when there aren’t any chicks around. In the midst of calling Bush a “pussy,” Trump speaks of being shot down by Nancy O’Dell“who was married at the time, as was Trump:

“Donald Trump is being slut-shamed in a culture where sluts are to be celebrated but manwhores are to be ruined.”

Personally, I would be honored to vote for any presidential candidate who uses the term “big phony tits.” It’s an absolutely wonderful turn of phrase, one I hope to use for the rest of my life whenever I see a pair of big phony tits. But it dampens my electoral ardor to hear Trump grovel before the American public for saying it.

For the greater public, Trump’s most objectionable comment in the tapes is where he states that a man’s fame can obliterate a female’s natural resistance to his sexual advances:

Across this once-great and quite possibly never-great-again nation, women and men who don’t appreciate being grabbed by the pussy were offended. And many of them”including last night’s debate moderator Anderson Cooper”twisted Trump’s statement into not only an endorsement of sexual assault, but a personal admission that he’d committed it. But Trump said that if you’re famous, women “let you do it,” which implies consent. And it’s also implied that since Nancy O’Dell rejected his come-ons, all of Trump’s wealth and fame did not make him feel entitled to grab her by the pussy.

Democrats, who like to pretend that LBJ, Bill Clinton, and JFK weren’t major-league dick-wrangling womanizers, were gleeful that the tape was leaked on Friday, drawing attention away from another major Wikileaks dump of emails that are damaging to Hillary Clinton. In the grand scheme of things, what does it matter that she dreams of “open borders” and told her donors that she takes “public and private” positions on policy issues? Donald Trump said that he likes to fuck women and that ladies throw themselves at famous men!

Establishment Republicans, who seem to want Trump to lose more than Democrats do, reacted with shock and dismay to hear that their presidential candidate enjoys penetrating the vaginas of women who are willing to have sex with him. Paul Ryan said he was “sickened” by Trump’s comments, Marco Rubio claimed they were “vulgar,” Jeb Bush called them “reprehensible,” George Pataki found himself “horrified,” and Mitt Romney said they were “vile.” Even Trump’s running mate Mike Pence said he was “offended” at the idea that Trump enjoys having sexual intercourse with women who signal that they are willing to have sexual intercourse with him due to his fame and money.

Pouring more gasoline on the bonfire, the egregiously Trump-hostile Washington Post unearthed old tapes of the GOP nominee telling Howard Stern that he “couldn’t care less” if his female partners have orgasms, that women “flip their panties” when they see him, that he would have slept with Lady Diana “without hesitation,” that “it’s checkout time” once a woman reaches 35, and that any woman “who is flat-chested is very hard to be a 10.”

Again”all the more reason to vote for him.

After nearly catching up with Clinton in mid-September, Trump has been slipping in the polls. Whereas he had shaved down her once formidable summertime lead to under a point, he now languishes about five points behind Clinton in the RealClear Politics average of national polls”and this is before pollsters will be able to gauge the fallout from Grab-‘Em-By-The-Pussygate.