The Tolerance That Is Only Skin Deep 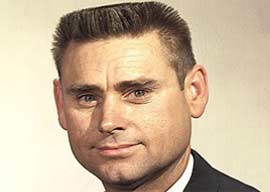 Country singer George Jones, who to my ears had the greatest voice ever recorded, died on Friday. A genius of phrasing and nuance, Jones had a stratospheric voice that captured human heartbreak with bottomless poignancy. I once read that when he was a kid, Jones’s father would wake him up in the middle of the night and threaten to beat him if he didn”t sing for him. Whether or not that’s true, his voice conveyed a tortured soul that was unmistakably human.

Standing outside an Atlanta club on Friday night where I”d performed an amped-up version of “White Lightning” in honor of Jones’s passing, a self-proclaimed fan of mine told me he”d mentioned Ol” Possum’s death on Facebook, only to receive a verbal feces-smearing by someone who called Jones a “racist” and a “redneck” who deserves to “rot in hell.”

As far as this guy could tell, his Facebook buddy felt Jones’s main transgression was that he was a white man who sang country music and was therefore automatically less than human.

“Don”t you dare think differently than they do. Their tolerance does not extend to what’s in your brain.”

Apparently, progressives only believe in hell when their perceived ideological enemies have died, hence the joyous “death parties“ when Margaret Thatcher gave up the ghost and the cowardly gloating over Andrew Breitbart’s still-warm corpse by sneering, bucktoothed hacks who weren”t fit to sniff his underwear.

Without ever feeling a need to apologize, I”ve done a great deal of hating in my life, but I”ve never seen a group of twisted, self-satisfied losers so unabashedly hate-filled as modern prog-bots. This is unforgivably and punchably ironic mainly because their entire platform is erected upon shaky Popsicle sticks of “compassion,” “tolerance,” and respect for the “cultural other.” Since their default defense mechanism is to accuse their enemies of being motivated primarily by hatred, it reinforces my belief that the primary impetus of modern leftist psychology is blind, stupid, hypocritical projection.

Just as normal cells mutate into cancer cells and metastasize, the word “liberal” has strayed far from its original moorings and now tends to indicate someone who despises liberty and freedom and is a pathological control freak that wants to obliterate the mere suggestion of any thought that would undermine their bloated and unwarranted sense of self-worth.

More and more, the modern leftist resembles an 80-year-old film actress who never quite made it in the business and lives huddled somewhere in a dusty Hollywood apartment with 20 cats and five pounds of makeup on her face. Peel away the thick mask she’s painted on her crinkled mug, and you have Medusa in curlers.

More and more, it strikes me that leftist compassion is truly skin-deep and goes no further than the epidermis. Oh, sure, they will tolerate a multitude of skin colors (except for the paler manifestations), a sickening array of reconstructive genital mutilations, a Boschian tableau of divergent sex organs crammed into improbable orifices, and any yapping, screaming vagina no matter how hateful or insane the she-beast obviously is.

They will tolerate racial violence as long as the targets are correct. They will applaud homicidal sexism so long as the victims are male. They won”t blink if you demean others” sexual orientation so long you”re shitting upon the straights. Obviously, their tolerance is massive and ever expanding.

But don”t you dare think differently than they do. Their tolerance does not extend to what’s in your brain.