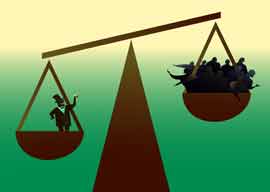 In recent weeks, I kept meaning to write up a stylized history of the evolution of political ideology over recent centuries. But my examples”why Andrew Jackson rather than Alexander Hamilton will get booted off the currency, how Spike Lee learned painfully to start denouncing Hollywood for being run by whites and stop denouncing it for being run by Jews, and why democracy in Poland is undemocratic”grew into entire columns.

So now it’s time to get past the illustrations to the big picture. Here’s a simple outline of four eras, each when a different political ideology seemed inarguable:

A half millennium ago, political power in the West was largely organized around the hereditary principle, whether aristocratic or monarchical. There were partial exceptions in which elections or randomness played a role in selecting leaders, such as the papacy, Venice, and the Holy Roman Empire. And medieval legislatures still survived. The trend in the 16th century, however, was toward the novel ideology of divine right monarchy.

Hereditary rule is seldom defended explicitly these days, but it retains a powerful grip on our political impulses. For example, the main qualification of the new Liberal prime minister of Canada, Justin Trudeau, is that he is the son of a former Liberal prime minister and a prominent groupie of the classic-rock era. Similarly, the great and good of America complacently assumed throughout the first half of the 2015 that the voters of both parties would have no objections to another Clinton-vs.-Bush election in 2016.

“You might think that when the old majority becomes a minority, it would then get minority rights. But that’s not how it works.”

Over time, however, hereditary rule lost favor and the concept of majority rule, which had been in bad odor with intellectuals since the Athenian democracy executed Socrates, grew in self-evidentness.

During the first half century of the United States, Hamiltonian restrictions on the power of the masses, such as property requirements for the vote, eroded under the momentum toward Jacksonian democracy. The United Kingdom lagged, but followed in the same direction, repeatedly cutting back on property restrictions on the vote from 1832 to 1918.

When I was young, this 19th-century triumph over oligarchy was a major subject in history textbooks. But today it’s hard to find much interest in the subject even online, since the voting restrictions by sex and race that remained are so scandalous.

In 20th-century America, there wasn”t all that much left for reformers to achieve in terms of majority rule. One mopping-up exercise supported by populists such as William Jennings Bryan and William Randolph Hearst was the 17th Amendment, which in 1913 transferred the choice of U.S. senators from the state legislators to the voters.

The presidential nomination system, being a strange combination of public and private interests, was slower to open up fully. Hubert Humphrey in 1968, when there were only twelve state primaries, was the last man nominated without winning any. This sense of democratic illegitimacy contributed to the violence in the streets at the Democratic convention in Chicago. Both parties supported a large increase in the number of primaries in the 1970s.

But these triumphs of democracy left the concept of majority rule increasingly boring, so energy flowed in the directions of minority rights.

In a wealthy, homogeneous country (the U.S. population was seven-eighths white in 1960), minority rights came to be seen as affordable. After all, minorities aren”t the majority, so the majority can afford to give minorities special privileges to overcome past discrimination, right?

By the middle of the 20th century, black minority rights had taken on much of the character of being a stalking horse for Jewish minority rights. Jews suffered no legal disabilities, of course, but chafed under various forms of business and social discrimination, such as being blackballed at some country clubs.

This high-low team-up of the most oppressed and most influential minorities in America proved hugely successful and set the template for future projects. Not surprisingly, feminism, which had been tarred by its role in inflicting Prohibition on America, was relaunched in 1969 with women as a pseudo-minority. And gay rights took off the same year.

But not all minorities turned out to possess group rights. The election of JFK in 1960 (and perhaps more importantly, his elevation to the American pantheon following his assassination in 1963) foreshadowed the near disappearance of white Catholics into the majority, just as the majority’s right to rule was being called into doubt.

In the spirit of the times, a Mafia godfather, Joseph Colombo, started the Italian American Civil Rights League in 1970 to protest FBI persecution of legitimate businessmen like, say, himself. He had some initial successes as Italian Americans like Frank Sinatra jumped on the bandwagon. But when he was gunned down at a rally in 1971, probably at the orders of other mobsters, the chances for Italian Americans to join the ranks of what Jonathan Haidt calls sacralized minorities evaporated.

The long ginning-up of Hispanic and Asian minority-rights campaigns has been very good for the careers of a handful of individuals, such as Marco Rubio and Ted Cruz. Likewise, Jeb Bush being both a WASP dynast and a Hispanic-in-Law was seen by the GOP moneymen as a reason why Republican voters would absolutely love him.

But the suspicion remains that Hispanics and Asians, despite now numbering 23 percent of the population, remain something of stage armies due to their apathy.

Yet the recent launching of a vast campaign for a ridiculously tiny minority, transgenders, shows the continuing appeal of this ideology of the Greatest Good for the Smallest Number.