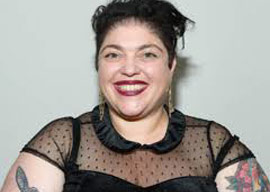 The Week’s Most Overweight, Reprobate, and Boilerplate Headlines

A PIG CALLED RANDA
The first thing you notice when looking at a picture of Randa Jarrar is that she is extremely fat.

The fact that she’s a fat fattie can’t be stressed enough, which is why we’re opening with it.

Roughly the size of Kuwait, Jarrar makes a point of publicly self-identifying as an “Arab American Muslim American Woman”—apparently she threw two “Americans” in there just to cover her girth—and declaring that she absolutely hates white people. Warning—this shrill, obese harpy has quite the potty mouth on her:

I’m inspired by several things. Usually my hatred for the man, and I can’t fucking stand the white hetero patriarchy. Then, sometimes, I’m sucking a white dick….I don’t give a fuck. I’m buying guns….I’m going to do some stupid shit. I’m tired of being the bigger person….I’m also just tired of the left being stupid….Why is [Richard] Spencer’s house still standing? I don’t understand. Like, it needs to be fucking broken into. People need to fucking throw grenades into it. I don’t give a fuck.

If she’s sincerely “tired of being the bigger person,” she needs to start cutting the donuts in half.

Jarrar is paid a pretty penny by the State of California to teach creative writing to college students. Allegedly the daughter of Middle Eastern millionaires who apparently likes eating pussy as much as she likes gobbling Cinnabons, Farrar decided to dance on Barbara Bush’s grave on April 17th when the former First Lady passed into the Great Beyond. A mere hour or so after the admittedly uncomely and frankly mannish Bush Family matriarch joined the Choir Invisible, Ms. Farrar queefed out the following tweet:

Barbara Bush was a generous and smart and amazing racist who, along with her husband, raised a war criminal. Fuck outta here with your nice words.

She followed that one up by squatting down and squeezing out this one:

PSA: either you are against these pieces of shit and their genocidal ways or you’re part of the problem. That’s actually how simple this is. I’m happy the witch is dead. Can’t wait for the rest of her family to fall to their demise the way 1.5 million Iraqis have. byyyeeeeeeee.

“Unless they’re Batman, anyone wearing a mask in public is probably up to no good.”

When people questioned whether a paid state employee who is entrusted to mold the soft, mushy minds of hormonally addled youngsters should be encouraging things such as burglary and grenade-tossing and salivating over the deaths of others, she displayed the flatulent arrogance of a stampeding warthog:

I work as a tenured professor. I make 100K a year … I will never be fired.

Then she gave out a phone number that she claimed to be hers but was actually that of an '); }

The president of California State University of Fresno, the school where Randa Jarrar routinely waddles into classrooms and barks like a sea lion at students, has announced she will not be fired. Undaunted and unbowed, she continues eating her way toward a more socially just world.

HAS KANYE WEST BETRAYED THE BLACK RACE?
Astronomically successful despite his obvious impediments, rapper Kanye West has been described as “so dumb he probably has another brain under his balls so he can walk.”

Yet unlike nearly the entire rest of the hip-hop community—which absolutely worshiped Donald Trump until he declared his candidacy for president and black Americans were brainwashed into hating him—West has not abandoned our golden-haired chief executive.

In the wake of the blacklash, West remained defiantly MAGA:

You don’t have to agree with Trump but the mob can’t make me not love him. We are both dragon energy. He is my brother. I love everyone. I don’t agree with everything anyone does. That’s what makes us individuals. And we have the right to independent thought.

Dragon energy? Is that anything like tiger blood? And if so, does that mean Kanye West, like Charlie Sheen, has AIDS?

Bruh, I never ever stopped fightin’ for the people
Actually wearin’ the hat’ll show people that we’re equal…
See, that’s the problem with this damn nation
All Blacks gotta be Democrats, man, we ain’t made it off the plantation.

On Friday the president declared that Kanye West “has performed a great service to the Black Community.” And who knows the blacks better than Donald Trump? He has a great relationship with them!

GEORGIA ANTIFA ARRESTED USING ANTI-KKK LAWS
Last Saturday as about two dozen members of a white-power group called the National Socialist Movement descended on the small Atlanta suburb of Newnan, GA to hold a rally in a public park, authorities evaded another Charlottesville debacle by doing what they should have done in Charlottesville—they arrested anyone wearing a mask.

Employing a 1951 Georgia law that was designed to cripple the KKK, police in Newnan—there were an estimated 800 law-enforcement officials from all across Georgia to protect the handful of white nationalists—separated the two groups with an eight-foot fence. Then they instructed anyone wearing masks—all of whom conveniently happened to be counter-protestors—to remove their masks or face arrest. Ten masked leftists were arrested, none of whom is attractive without the mask.

A local sheriff told a reporter that antifa came to Newnan “with a purpose. They came here to antagonize, take control of our community and incite fear.”

The white nationalists apparently had more peaceful motives. They gave their little speeches for about an hour and left town. And no one was injured. Let this be a lesson: Unless they’re Batman, anyone wearing a mask in public is probably up to no good.