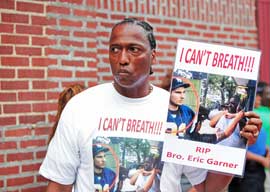 The Week’s Most Arthritic, Parasitic, and Anti-Semitic Headlines

ERIC GARNER’s DEATH: WHO’s RESPONSIBLE?
Can one be faulted for thinking that black Americans need to find some better heroes around which to rally?

In the more than two decades that have led us from Rodney King to Trayvon Martin to Michael Brown and now to Staten Island’s Eric Garner, there’s been a stubborn pattern of overblown media debacles all involving seemingly innocent and put-upon black male victims of institutional white racism. The perceived injustices inflicted upon them often lead to “protests,” which is an extremely nice way of saying looting, arson, racially motivated revenge attacks, and murder.

But once the facts leak out in each case, the leftist narrative is blown to shreds in the form of a fundamentally unsavory “victim” whose actions directly precipitated the suffering that ended up befalling them. In Rodney King’s case, it was leading LA police on a high-speed chase through city streets, then continually lunging at them instead of following orders and lying on the ground like his partners (who emerged relatively unscathed) did. Trayvon Martin was initially portrayed as a smiling, chubby-cheeked chocolate teen angel until it became evident that he was a wannabe thug who”d ambushed George Zimmerman and smashed his skull into the concrete. Instead of being shot in cold blood as he held his hands up in surrender”or, according to some accounts, as he was running away”Ferguson’s Michael “Gentle Giant” Brown turned out to be an obese gangsta rapper who”d strong-armed a store owner before deciding it would be a good idea to attack an armed cop.

In the latest case of overblown and misplaced black outrage”truly, if they thought “black lives matter,” they”d stop killing one another instead of myopically focusing on the absurdly tiny quotient of black homicide victims who die at the hands of white policemen”we are told that Staten Island’s Eric Garner was a humble and friendly father of six trying to eke out a living selling loose cigarettes when a pack of predatory and bloodthirsty white cops decided to choke him to death for a ridiculously petty crime.

Is that what the facts say?

“As the country continues to burn, the experts continue to wonder why.”

Expunged from nearly all media accounts”the same accounts that always lead to misperceptions and outrage and subsequent mayhem”is the fact that Garner had previously been arrested over thirty times, including for assault and grand larceny. He had been busted for selling loose cigarettes around eight times. At the time of his fatal encounter with Staten Island cops, he was free on bail not only for selling untaxed cigarettes but also for marijuana possession, false impersonation, and driving without a license. In short, he had been a lifelong pain in the ass to law enforcement.

The video of Garner’s apprehension by police on July 17 shows him yelling at police and resisting arrest. It also reveals him to be morbidly obese”according to an acquaintance, Garner couldn’t walk more than a block without having to rest. Due to the fact that Garner kept telling police, “I can”t breathe””even though he was breathing well enough to say “I can”t breathe” eleven times”the video also gives the impression that he died at the scene from a chokehold. But an autopsy revealed there was no damage to his windpipe or neck bones. And he remained alive until he suffered a cardiac incident in an ambulance on the way to the hospital.

Would he be alive if he hadn”t resisted arrest? Yes. Would he be alive without his multiple health problems? Yes. As with Rodney King, Trayvon Martin, and Michael Brown, the precipitating factor in Garner’s victimization was being a dumbass.

Is there any evidence”any at all“that race had anything to do with Garner’s demise? No. But neither was there the merest scrap of proof that the slayings of Michael Brown and Trayvon Martin had anything to do with race. And Rodney King’s two accomplices that fateful night were every bit as black as he was, but they obeyed police orders and didn”t get thrashed like he did.

Much of America has been lulled and deluded into believing that if anything bad happens to any black person, it is the result of white racism. Even to suggest that their behavior may have played a part is to risk being smeared with a Scarlet “R.”

After a grand jury failed to indict the officer who”d wrapped his arm around Garner’s neck while taking him to the ground, “protests” and “die-ins” and traffic-blocking erupted nationwide. Capitalism and white supremacy and institutional racism were blamed. One toothy geek at the Washington Post even blamed Garner’s asthma on the delusion that our institutionally racist society refuses to allow black people to breathe the same air as whites.

As the country continues to burn, the experts continue to wonder why.

Early last Sunday, 32-year-old Bosnian expat Zemir Begic was beaten to death with hammers by a group of four young males”apparently one Hispanic and the rest black. A video filmed while police were cleaning up the crime scene features audio of a woman saying:

Arrest them all. Fuck this shit….And [of] course, it’s a white kid, right after black people [were] running up and down the street saying, “Eff the white people, kill the white people.” This is what we have.

Although Begic’s cousin says the murder was a hate crime, St. Louis police insist the attack was not racially motivated. However, they are investigating whether an incident on Friday morning in which three black youths dragged a Bosnian woman out of a car then kicked and beat her, allegedly while calling her a “Bosnian slur,” qualifies as a hate crime.

Members of St. Louis’s Bosnian community”a cluster of around 70,000 expats from the conflicts of the early 90s”took to the streets to protest peacefully and demand further investigation. Apparently they still bear some residual group consciousness from the Old Country. Quite obviously they have yet to learn that this is a luxury forbidden to modern white Americans.