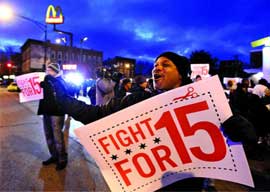 The Week’s Most Galling, Appalling, and Caterwauling Headlines

WHITE MALES FILE DISCRIMINATION COMPLAINTS
In a cultural milieu so utterly inundated with negative stereotypes about white males that it may qualify as the closest America has to true “institutional” racism and sexism, white males are starting to retaliate by filing discrimination complaints against their antagonists.

At Archie Comics, whose namesake is a white male with red hair and freckles, co-CEO Nancy Silberkleit had a gender-based discrimination lawsuit filed against her for allegedly addressing male underlings as “Penis” rather than their proper names. Silberkleit filed papers denying that such discrimination was even possible since white males are not considered “a protected class.”

At Minneapolis Community and Technical College, three white-male students of a black female teacher on “structural racism” have filed a complaint with the school’s legal affairs department. In class, one student had asked the teacher, Shannon Gibney, why white males were singled out for opprobrium “in every class” and another complained that “people are trying to say that white men are always the villains, the bad guys.” The school reprimanded Gibney for fostering a “hostile learning environment.” In turn, Gibney and six other teachers are filing a federal suit against the school, alleging discrimination.

MAXIMUM WAGES FOR MINIMAL SKILLS
AstroTurfed by the SEIU, fast-food workers in several American cities staged a walkout on Thursday and wielded “FIGHT FOR 15” signs demanding that the federal minimum wage be raised from $7.25 to $15 per hour. US Census Bureau data claims that more than half of America’s fast-food workers also rely on some form of welfare.

OBAMA LIED, LET HIS ILLEGAL UNCLE SLIDE
Barack Obama can now boast that two of his relatives, both illegal aliens, have been granted amnesty during his reign. The most recent twig on the Obama Family Tree to escape deportation is his uncle Onyango Obama, arrested for drunk driving in 2011 outside the Chicken Bone Saloon in Framingham, MA. Although the White House had previously claimed that the twain had never met, it now acknowledges that Obama had briefly lived with his uncle in the 1980s. A judge has granted Onyango Obama amnesty based on “good moral character.”

A VERY ATHEIST CHRISTMAS
Evangelical atheists”yes, they exist, and they’re getting louder about it”have merrily spent the holiday season trying to take the “Christ” out of Christmas.

American Atheists, Inc.”yes, they’ve even incorporated”have placed a giant 1,600-square-foot animated billboard in Times Square that actually shows a hand using a pen to “X” out the word “Christ” in Christmas.

In Ellsworth, Maine, the Downeast Humanists and Freethinkers are sponsoring a float for the town’s annual Christmas parade intended to “emphasize the [Christmas] tree’s pagan roots.”

In Chicago’s Daley Plaza, the Wisconsin-based Freedom From Religion Foundation has placed an eight-and-a-half-foot-tall letter “A”“intended to represent “the atheist and agnostic community””in between Hanukkah and Christmas displays.

In Sacramento, the Freedom From Religion Foundation is sponsoring a campaign called “Out of the Closet” by renting 55 billboards encouraging atheists to “be comfortable during the holiday season.”

And at the Florida Capitol in Tallahassee, the same foundation is sponsoring a banner that parodies Nativity scenes by depicting some of the Founding Fathers along with the Statue of Liberty standing around the Bill of Rights, which is nestled in a manger.