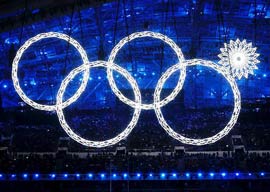 The Week’s Most Dumb, Glum, and Ho-Hum Headlines

OLYMPIAN CONTROVERSIES
The Sochi Winter Olympics are underway, and in a world where nothing is apolitical anymore, luges and ice skates are being shoved aside to make way for political controversies of every conceivable stripe. For far too many people, this is not about athletics or competition, it’s about social justice“or in this case, Sochi justice. Thus we hear about the unfair incarceration of orca whales and the extermination of stray dogs around Sochi…about urine-colored tap water in hotels and “strange double toilets” at the Sochi Olympic Center and the American bobsledder who heroically kicked his way out of a locked bathroom…about botched hijacking attempts, rumored digital surveillance of athletes, fears of toothpaste bombs, militant jihadist movements in the Caucasus, the Circassian genocide at the hands of the Russian Empire, and how NBC dubbed communism “one of modern history’s pivotal experiments.”

We also hear a lot about Vladimir Putin and his George Steinbrenner-sized ego. We are told that this $50-billion extravaganza is riddled with cronyism and corruption. We are reminded that his homo-hating regime arrested a quartet of gay-rights activists on the opening day of the ceremonies. We are told that Barack Obama declined to attend the festivities and sent three gay athletes in his stead. We read that Putin’s alleged girlfriend was made a torchbearer in the opening ceremonies. We read reporters’ shock and dismay at the fact that the Russian figure skater that lit the Olympic cauldron once Tweeted a doctored photo of Barack and Michelle Obama being offered a banana by a white hand. We read of Putin’s humiliation when a giant lit display featured four Olympic rings rather than five.

We don’t hear much at all about how Russia stands in the way of Western dominance and US imperialism and hegemonic control of the Middle East and that all other controversies are merely window dressing for this fundamental power struggle.

There have always been Olympic scandals, but it should be a capital crime to mix politics and the Olympics.

And we still don’t quite understand curling.

“There have always been Olympic scandals, but it should be a capital crime to mix politics and the Olympics.”

Woody Allen took me by the hand and led me into a dim, closet-like attic on the second floor of our house. He told me to lay on my stomach and play with my brother’s electric train set. Then he sexually assaulted me….I didn’t like it when I had to get in bed with him under the sheets when he was in his underwear. I didn’t like it when he would place his head in my naked lap and breathe in and breathe out.

Eight days later, Allen responded in The New York Times. He cited testimony from sexual-abuse experts that concluded Dylan had not been molested. He pointed out Mia Farrow’s recent comments that her son, future MSNBC host Ronan Farrow”who started this whole rancid ball of dung rolling again with a Tweet nearly a month ago”may be Frank Sinatra’s biological son rather than Allen’s, which would contradict her own previous testimony. He also noted that Dylan’s account of molestation bore strange resemblances to the lyrics of “With My Daddy in the Attic,” written by Dory Previn, who’d been married to Andre Previn prior to Andre’s marriage to Mia Farrow.

Editorials poured out in support of Allen and against him. While feminists continued to insist upon the “truth” of Dylan Farrow’s allegations, Moses Farrow, yet another member of this improbable and dysfunctional brood, came to his defense. And then Dylan Farrow fired back yet again, calling the Woodman a liar and insisting that she will “not be silenced,” which should be obvious to everyone by now.

No one but the major players knows the truth, but nearly everyone could agree that this public spectacle is ugly, ugly, ugly.