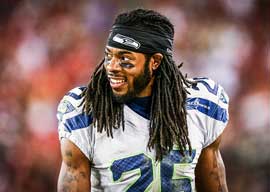 The Week’s Most Semitic, Parasitic, and Sodomitic Headlines

RICHARD SHERMAN’s “I HAVE A SCREAM” SPEECH
Martin Luther King Day came and went last Monday. Some missed the civil-rights icon, while others only missed their mail.

Say what you will, but the destruction of black America is the result of Fedzilla’s $16 trillion and 50-year-old so-called war on poverty, which created a cycle of dependency, destruction and culture rot for black America….To honestly celebrate the legacy of Dr. King, black America would have to admit to the self-inflicted destructo-derby they are waging and begin to tell their liberal Democratic slave drivers to take a hike.

In Nugent’s state of birth, a group that calls itself Being Black at University of Michigan“where, presumably, a bunch of black students at the University of Michigan walk around being black, acting black, reminding everyone that they’re black, and possibly even focusing on their blackness to the detriment of their calculus grades”has threatened “physical actions” by today if its list of seven demands are not met. The demands, made on the holiday honoring the presumably nonviolent MLK, are somewhat vague and seem to revolve around being further compensated, rewarded, and stroked gently on the head for being black.

“Martin Luther King Day came and went last Monday. Some missed the civil-rights icon, while others only missed their mail.”

While one “Native American” rights group has taken their campaign to ban the Washington Redskins’ name all the way to the United Nations, last Sunday night’s televised postgame apopleptic chimpout by Seattle Seahawks cornerback Richard Sherman has led to the predictably pious and tut-tutting national lectures about race and America’s fear of assertive black men and how the word “thug” is racist (except, apparently, when black men embrace it). Despite his uncultured outburst, Sherman graduated from Stanford with a 3.9 GPA and is expected to make millions in new endorsement deals based on his now-famous fifteen seconds of televised barking. Next Sunday’s Super Bowl is largely being framed as a matchup between Denver’s cerebral and fair-haired quarterback Peyton Manning versus Seattle’s all-black starting defense.

THIS GAY WORLD: BEGONE, YE FELINE FAIRY!
An unidentified middle-aged Nigerian woman has disowned her male cat due to his “unnatural sexual behavior” that she deemed to be “a contradiction of the laws of nature.”

The roughest-looking lesbian in memory has pled guilty in a Scottish court to “charges of behaving in a threatening and abusive manner and dangerous driving” after an incident where she used her car to block a bus that her ex-lover was driving.

A gay New Zealand house sitter has been rewarded $13,000 after his female employer mocked his speaking manner, gave a limp-wrist gesture, and called him a “fucking faggot.” Not bad for a day’s work.

A Kansas judge has ruled that a man who donated his sperm so that a lesbian couple could have a child is now liable for child-support payments.