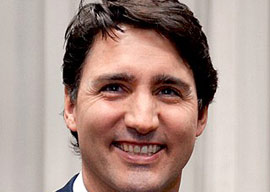 The Week’s Most Hispanic, Volcanic, and Satanic Headlines

JUSTIN TRUDEAU: HIM, TOO?
As the telegenic fist-puppet of the global elite, Justin Trudeau does everything his string-pullers tell him to do: He pretends that Muslims are human, that trannies are women, that white people need to be eliminated, and that women never lie about rape.

Earlier this year, Trudeau threw his support behind the castration-crazy witch hunt known as #MeToo, a vanity project in which women receive love, cash, interview requests, and the sweet taste of revenge by boasting that they were sexually assaulted by powerful men. He called it “a movement whose time has come”:

Sexual harassment is a systemic problem. It is unacceptable. When women speak up, it is our duty to listen to them and to believe them.

Yeah, that’s going to be problematic for the boyish man whom many suspect is the bastard love child of Fidel Castro and Trudeau’s schlong-gobbling whore of a mother.

Way, way, WAY back in 2000, an unsigned editorial appeared in a small-town British Columbia newspaper called The Creston Valley Advance. It claimed that while attending a music festival, Trudeau—who was 28 at the time and not yet a politician—was guilty of “inappropriately handling” one of two female reporters assigned to cover his appearance at the event:

Didn’t he learn through his vast experiences in public life, that groping a strange young woman isn’t the handbook of proper etiquette?

The story also says that the day after groping the reporter, Trudeau apologized, saying, “I never would have been so forward” if he’d known she had media access.

The story has recently resurfaced, with the added gut-punch of the unnamed reporter finally identifying herself.

I was the reporter who was the subject of the Open Eyes editorial, published in the Creston Valley Advance in August of 2000….The incident referred to in the editorial did occur, as reported. Mr Trudeau did apologize the next day.

Forced to respond, Trudeau claims that although “I do not feel I acted inappropriately in any way,” he concedes that maybe Rose Knight experienced things differently.

When asked why he apologized to her if he hadn’t misbehaved, he said:

That’s the most uncomfortable attempt at mansplaining we’ve ever heard.

“Beware of anyone who insists they know what you really mean. They rarely have your best interests in mind.”

LEFTISTS HALLUCINATE WEIRD MESSAGES ON “MAKE AMERICA GREAT AGAIN” HATS
In an obvious attempt to starve Trump supporters to death, restaurants are denying them service and abusing them with a sadistic ferocity not witnessed since Romans fed Christians to lions.

In Vancouver—which is in Canada, whose prime minister publicly apologized for groping a woman in 2000—a man has been fired for refusing to serve a customer who sashayed into the Teahouse in Stanley Park foolishly wearing a “Make America Great Again” cap. Daniel Hodge, former manager, says that when he looked at the hat, he actually didn’t see “Make America Great Again” —instead, he saw “racism, bigotry, Islamophobia, misogyny, white supremacy, [and] homophobia.”

That’s a lotta words to fit on a baseball cap!

Despite being fired, Hodge remains impenitent and for some reason saw the need to announce to the world that he is an intensely good person:

As a person with a strong moral backbone, I had to take a stand against this guest’s choice of headwear while in my former place of work. Absolutely no regrets.

In Texas—which will likely be forced to soon change its name to El Texas—a beefy 30-year-old Hispanic man with the adorable name of Kino Jimenez has been arrested for snatching a skinny 16-year-old white kid’s MAGA hat and throwing a soft drink on him at 2AM at a Whataburger franchise. The victim, Hunter Richard, says that Jimenez ambled up to his table, ripped the hat from his head, and asked him what it meant. When Richard said it symbolized his support for the president, Jimenez threw a drink on him, said, “You ain’t supportin’ shit, nigga,” and walked out of the restaurant, MAGA hat in hand.

On Twitter, one user hallucinated that Richard had been wearing a Nazi baseball cap:

Wish I could take the high road. But your MAGA hat reads like a swastika to me. So ummm … hmmm. Yeah. Maybe I’m no longer a decent person.

Beware of anyone who insists they know what you really mean. They rarely have your best interests in mind.

FLYERS FOUND IN SACRAMENTO CLAIM LESBIAN SEX CAUSES CANCER
Rippling waves of anti-homophobic panic roiled the bleak and underwhelming California capital city of Sacramento last week after a white man was spotted placing flyers around a neighborhood claiming there is a medical link between lesbian sex and cancer:

There is no other reason (for higher rates of cancer) than the activity involving the genitals that is solely peculiar to lesbianism. Lesbians’ lifestyle is the same as everybody else except for their lovemaking activity that is exclusive to them, therefore it must be that activity which results in a higher incidence of cancer because everything else they do is the same as everybody else…their way of lovemaking is what causes high estrogen which causes cancer.

Since a Bible verse was included in the leaflet, there is speculation that the man is a “Christian extremist.”

Whether or not Sapphic shenanigans lead to cancer, there is undeniable scientific proof of a link between lesbianism and pantsuits.

SPAIN SENDS TRANNY TO MISS UNIVERSE CONTEST
For the first time in the history of the universe, Miss Universe may be a biological mister.

A dude who thinks he’s a chick named Jenna Talackova was barred from competing as Canada’s representative for Miss Universe in 2012, despite the fact that he’s a dead ringer for Ivanka Trump and our allegedly fag-hating president supported Talacklova’s bid back when he owned the pageant.

But finally—to the joy of people who gain moral succor from cheering the advancements of dudes who think they’re chicks—the Miss Universe pageant will have a delusional male as a contestant—Angela Ponce will take his male chromosomes with him to represent Spain in this year’s contest. Hopefully he’ll be able to tape down his hairy balls long enough to snatch the prize to the delight of men who wish they were born with snatches.