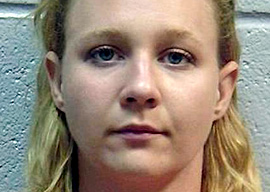 A DELUSIONAL LOSER NAMED REALITY WINNER
Yes, her real name is Reality Leigh Winner. Her parents named her that and are perhaps to blame for many of the things that are wrong with her.

A little while ago on Twitter, Ms. Winner called Donald Trump an “orange fascist.” Now she’s wearing an orange jumpsuit.

Until last weekend when she was arrested at her Georgia home, the 25-year-old Winner worked as a contractor for the National Security Agency despite leaving a huge slime trail of social-media comments suggesting that, oh, maybe she’s prone to bursts of political hysteria and thus shouldn”t be allowed within a thousand miles of sensitive government secrets:

“¢ She suggested to mouth-breathing hip-hop superstar Kanye West that he should sell shirts proclaiming that “being white is terrorism.”

“¢ She has variously referred to Donald Trump as a “cunt,” an “orange fascist,” and a “piece of shit.” She has implied that he enjoys burning crosses. After his election, she has used the hashtags #NeverMyPresident and #Resist.

“¢ She treasonously told Iran’s Foreign Minister that “If our Tangerine in Chief declares war, we stand with you!”

“¢ In notebooks seized by federal authorities, she allegedly wrote, “I want to burn the White House down … find somewhere in Kurdistan to live. Ha-ha!”

Winner faces a single charge of “gathering, transmitting, or losing defense information.” She allegedly printed out a classified document about a Russian cyberattack on US voting machines prior to last November’s election and mailed it to website The Intercept. As far as we can discern, the document does not allege the attack was successful, that it had any effect on the election results, nor that Donald Trump or his associates were in any way involved with it.

Miss Reality Winner faces ten years in prison. If she actually believes being white is “terrorism,” justice will only be served if she is also charged with lifelong acts of terrorism.

SHRIEKS OF PAIN AS TRUMP TRIMS HOLOCAUST MUSEUM BUDGET BY 5%
Because everyone on this planet except rabid anti-Semites who need to burn in ovens believes that we can never, ever hear enough about the Holocaust, a “bipartisan group of 64 members of Congress“ is rending their shirts and gnashing their teeth and beseeching Yahweh, Lord God of Israel to persuade Donald Trump to reverse his decision of decreasing next year’s budget for the US Holocaust Memorial Museum by an astounding $3 million.

Yes, you heard that right. Three million. So instead of the $57 million that the museum got this year, they will only get $54 million next year. That’s a decrease of a robust FIVE percent.

No one is quite sure why there is a Holocaust museum in the United States, since to our knowledge no one has ever alleged that this event occurred in America. Neither is anyone quite sure why American taxpayers need to be bled of over $50 million yearly just to be beaten over the head with guilt about it. If you”re going to have a museum, how about a few more dedicated to the 400,000+ American soldiers who died in World War II? And a couple more movies? And maybe a museum or five dedicated to the 60 million people who died in World War II overall? Or about twenty movies and four hundred museums dedicated to the 100+ million victims of communism? Or maybe even one museum dedicated to the over 600,000 white soldiers who died in the Civil War, and make sure the museum is fireproof?

And even if none of those museums get built, how about taking the kvetching down just a notch?

INDIANA BILLBOARD LEADS TO CRIES OF “HATE”
A big black billboard on the east side of Indianapolis features the following words in giant white lettering:

Allegedly “appalled“ by the billboard, a Muslim man said, “We do support free speech, but”” at which point we stopped listening because he contradicted himself.

In reaction to the appalling billboard, an interdenominational gaggle of Islamically naÃ¯ve religious leaders gathered together, held hands, denounced “hatred,” and joined in collective denial of the fact that Muhammad was an intolerant slave-driving pedophile Jew-beheading polygamist.