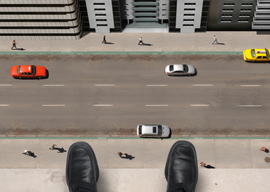 OBAMA-LAMA-DING-DONG!
America’s 44th president says he’s comfortable with the fact that the morning-after pill has been approved for over-the-counter sales for anyone over 15, which means his daughter Malia will be eligible to start taking it in July. At the White House Correspondents’ Dinner, Obama joked that “I’m not the strapping young Muslim socialist I used to be,” a jibe that was not blown into a huge controversy by the press; in fact, the Huffington Post omitted the word “Muslim” in an early version of the story. The number of names in a classified terrorist database has soared by 60% or so during Obama’s reign. These names included that of freshly dead Boston Marathon bombing suspect Tamerlan Tsarnaev and his mother. Conservative black Supreme Court Justice Clarence Thomas was roundly condemned as a shuffling, cornbread-fetching house Negro for observing that he always expected America’s first black president would be one “who was approved by the elite, and the media, because anybody they didn’t agree with they would take apart.” In response, the elite and the media took Thomas apart. Thomas’s comments were tamer than those of former Obama pastor Jeremiah Wright, who in 2009 blamed “Them Jews” for preventing him access to Obama subsequent to The One’s election.

IT’S A WONDERFUL TIME OF YEAR FOR A RIOT
Seattle, a disproportionately safe and nonblack metropolis where white anarchists go to complain about racism and pretend they’re dangerous, hosted another wave of scruffy young storefront-smashing radicals protesting “capitalism” for this year’s May Day “celebrations.” Although protestors reportedly destroyed property, spit on reporters, and threw various blunt objects at police, an activist named Olivia One Feather complained that Seattle’s Finest “don’t have any manners.” In Virginia Beach, which saw a wave of violence during 1989’s Greekfest, locals held a meeting to discuss how to salvage the city’s tourism industry after late April’s “College Days” hootenanny was pockmarked by violent mayhem.

KEEPIN’ IT RACIAL
Outrage erupted after an Arizona school announced it would hold a satirical “Redneck Day.” In keeping with the times, those most outraged were not the whites who are routinely maligned by terms such as “redneck,” but blacks who were reminded yet again of the slavery that they were far too young to have experienced. No one seemed to realize that rednecks weren’t slave owners, because their necks got red from doing their own farm work in the sun. Speaking of red skin, Washington Redskins quarterback Robert Griffin III Tweeted a comment about “the tyranny of political correctness” and was greeted with widespread hostility and tut-tutting”especially because he’s black and doesn’t think like a black person is expected to think”which doesn’t quite undermine the idea that we’re living under an ideological tyranny. Down South in Georgia, a petition is gaining steam”if 164 total signatures can be described as remotely steamy”to erase the massive carving on the side of Stone Mountain depicting Jefferson Davis, Stonewall Jackson, and Robert E. Lee. Up North in Canada, the CBC pulled an ad seeking a host for a children’s program that specified the actor be “any race but Caucasian.” Over in Merrie Olde England, a ferry company has been criticized for using Viking imagery in its logo because it apparently induces fears of a sudden Nazi revival. And after an Islamic bombing plot targeting the English Defence League was foiled, “experts” say they fear the situation could trigger a race war on the soggy old island.