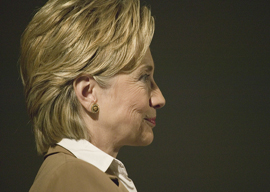 HATEFUL COMMENTS FROM THE RIGHT (FINALLY!)
After enduring decades of accusations that they relentlessly spewed out boiling rancid vats of hateful vitriol”accusations that were long on hyperbole but short on evidence”two right-wing pundits finally stepped forward with a pair of comments that actually seemed to encourage violence against their political foes. Radio host Pete Santilli said the following about Hillary Clinton’s vagina, which we’ll assume is a big target:

I want to shoot her right in the vagina and I don’t want her to die right away; I want her to feel the pain….I’m supporting our troops by saying we need to try, convict, and shoot Hillary Clinton in the vagina.

Santilli also said that “Barack Obama needs to be tried, convicted, and shot for crimes against the United States of America.” A Secret Service spokesman (try saying that ten times fast) vowed that his agency will “take the appropriate follow up action” in regard to Santilli’s remarks.

Radio host and Fox News contributor Andrea Tantaros, decrying recent revelations that the IRS was targeting conservative groups and the Justice Department was spying on reporters, encouraged the physical assault of Obama voters:

This is Obama’s America. It’s like the Soviet Union. He said he would change the country. He said it…and a lot of people voted for him. And if you see any of those people today, do me a favor and punch them in the face.

WHITE POLS ON DOPE
In response to a Toronto Star story (try saying that ten times fast) alleging that reporters had seen a cell-phone video of the city’s corpulent mayor Rob Ford “inhaling from what appears to be a glass crack pipe,” the oleaginous Ford finally broke his silence and said, “I do not use crack cocaine, nor am I an addict of crack cocaine.” It bears noting that Ford did not at any juncture mention whether he eats crack cocaine. In Pennsylvania, former Washington County Judge Paul Pozonsky has been charged with stealing cocaine that was used as evidence in cases over which he presided. In Illinois, St. Clair County Circuit Judge Michael Cook appeared in court wearing a T-shirt emblazoned with the words BAD IS MY MIDDLE NAME to face counts of heroin possession and firearms infractions. The charges came only a few weeks after a colleague of Cook’s, Judge Joe Christ, was found dead of a cocaine overdose in a hunting lodge that at the time had been inhabited only by Cook and Christ.

MAKIN’ IT GAY ALL THE WAY
The Boy Scouts of America voted to accept openly, mincingly, screamingly gay boys into their ranks while maintaining a ban against gay Scoutmasters. Tellingly, the increasingly pushy and flamingly hypocritical gay lobby has not yet sought legislation that would permit straight Boy Scouts to attend adult gay bars. Texas Governor Rick Perry refrained from picking his nose long enough to say he was “greatly disappointed” in the BSA’s decision.

In Florida, the usual suspects are screaming HOMOPHOBIA regarding statutory-rape charges filed against Kaitlyn Hunt, an 18-year-old who allegedly had sex with a girl four years her junior. A Florida state attorney responded by saying that the state prosecutes 25 to 30 such cases every year, most of them involving heterosexual couples.

An estimated 100 gaybirds engaged (engayged?) in what is described as “Ukraine’s first gay pride march.” Counter-protestors allegedly chanted “Ukraine is not America, Kiev is not Sodom.” At another unsanctioned gay rally in Moscow, police detained at least 30 protestors and their furiously icon-waving antagonists. In both stories, news reporters used words such as “homophobia” and “homophobic” as if such terms had even a smidgen of objective, journalistic meaning.

MEXICANS (AND MEXICAN’TS)
In the same week that Barack Obama and Joe Biden were feting illegal aliens in the Oval Office while apparently snubbing Immigration and Customs Enforcement agents, A federal judge ruled that Arizona Sheriff Joe Arpaio’s office was guilty of racial profiling. As Congress plans to shove through so-called “immigration reform” legislation like a fist through a colon, Alabama Senator Jeff Sessions warned that such a bill would “hammer working Americans.” And coke-scorched actor Charlie Sheen, set to star in Machete Kills, will use his birth name Carlos Irwin EstÃ©vez in the feature. White America could not be reached for comment about whether it lamented the loss.