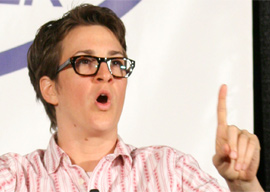 The Week’s Most Tickly, Sickly, and Prickly Headlines

RACHEL MADDOW DROPS A BOMBSHELL ON HERSELF
MSNBC’s Rachel Maddow is easily the manliest broadcaster currently on television, with her free testosterone levels at any given moment measuring roughly 400% those of her lesbian coworker Chris Hayes. Maddow has a perma-smirk welded onto her face that is only slightly less annoying than the smarmy mug of world powerlifting champion and radical circumcision victim Sally Kohn.

Despite the fact that Donald Trump gained the presidency by beating both political parties and roughly 99% of the mainstream media”and despite the fact that according to most estimates, he took every dollar he inherited from his father and multiplied it by 100″his critics seem hardwired to depict him as an incompetent boob and a financial failure. They”ve hammered especially hard on his refusal to release his tax returns, which Trump has repeatedly promised to do after an IRS audit is concluded.

On Tuesday Rachel Maddow tweeted that she had some “breaking news””she would feature a Trump tax return on her TV show that night. And she did”or at least two pages from Trump’s 2005 filing. It showed that he made a net income of around $150 million and paid $38 million in taxes”a higher percentage rate than Maddow’s hosts at MSNBC paid, five points higher than Barack Obama’s tax rate, and nearly twice the quotient of soak-the-rich socialist Bernie Sanders, who claims to understand the plight of the working class but miraculously never needed to earn a steady paycheck until he was nearly 40″and then only at the taxpayers” expense.

In a single year, Donald Trump likely paid more money to the federal government than state-worshipers such as Barack Obama, Bernie Sanders, and Rachel Maddow will in their lives…combined.

“Rachel Maddow wound up shooting herself in the foot with her smoking gun.”

It was a failure of such titanic proportions that it led to multiple comparisons to Geraldo Rivera’s infamous invasion of Al Capone’s vault. Rachel Maddow wound up shooting herself in the foot with her smoking gun.

CHILDREN’s CARTOON BOOK TEACHES THAT MEN CAN MENSTRUATE
Cass Clemmer describes herself as a “menstrual warrior” and a “genderqueer menstruator,” which in simpler and saner times would have had her characterized as a “mentally ill and sexually confused woman who projects her psychological turmoil onto a “sick and intolerant” society.”

Cass is the author of The Adventures of Toni the Tampon: A Period Coloring Book, which struggles valiantly but fruitlessly to argue that men can have uteri and menstruate with them:

[People] with menstruating uteruses may identify on any number of points along the multidimensional gender spectrum. There are agender menstruators, genderqueer menstruators (like me!), other non-binary menstruators, and yes trans menstruators who are men or boys. We simply seek to be inclusive of all menstruators, no matter how you identify.

AMAZON PURGES “HOLOCAUST DENIAL” BOOKS
Citing a highly publicized but in many cases exaggerated or outright fabricated wave of “anti-Semitism” that for some inscrutable reason just so happens to magically correlate with rising anti-globalist sentiments across the globe, Jewish activists have been pressuring amazon.com”which effectively monopolizes the book-publishing industry”to yank any titles that appear to traffic in “Holocaust denial,” which is a highly propagandized term used as a blanket smear to destroy and ostracize anyone who dares question even the tiniest detail about the official version of the Holocaust. Showing the merest bit of skepticism or intellectual curiosity about this historical event is currently a crime in 14 European countries.

As of last week, amazon.com caved to the activists” demands, pulling such revisionist classics as Holocaust: The Greatest Lie Ever Told, The Hoax of the Twentieth Century: The Case Against the Presumed Extermination of European Jewry, and Did Six Million Really Die? from its digital shelves.

Castle Hill Publishers“which focuses intensely on Holocaust revisionism”claims that Amazon deleted a robust 68 of its paper titles and 72 Kindle books from its listings overnight “with no announcement and resounding silence from the world press,” even though none of the titles “preached hatred in any form.”

Perhaps one day in the distant future, humans will have evolved enough to realize that censorship is strictly the domain of those who are deeply insecure about the infallibility of their narrative.

MOTHER AND SON BOTH SUDDENLY REALIZE THEY”RE ACTUALLY FATHER AND DAUGHTER
People magazine”like nearly all of the mainstream press”has abandoned objectivity to embrace the delusion that gender is socially, rather than biologically, constructed. It currently features a headline that only would have been greenlit in an insane world””Mother and Son Transition to Father and Daughter After Realizing They Are Transgender.”

It follows the warped saga of 39-year-old Eric Maison”who was born a woman with a pair of exemplary, and some would even say enviable, breasts“and her son Corey, who was born a boy and retains the telltale XY chromosomes. “Eric” claims that one night after watching a TV documentary about transgender people, she and her son both suddenly realized they were trannies. They then made the utterly rational and scientific decision to declare that they were not in fact mother and son, but father and daughter.

“Eric” started receiving testosterone injections, had her wonderful boobs sawed off, and now looks like an ugly lesbian. Corey pulls off the “girl“ shtick more convincingly than his mom’s posturing as a man, albeit a “girl” that has a 41% likelihood of attempting suicide at some point along his wondrous journey of self-discovery and surgical mutilation.