This One’s for the Kids 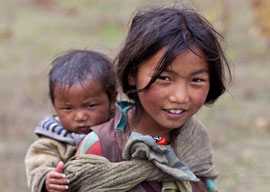 Whenever a colleague asks for voting advice, I have one stock answer”vote for whoever doesn’t have commercials with children. Whichever candidate trots out the tykes is the one lacking in ideas, so avoid him.

Lamentably, “The Children” have a long history of leading the march to war.

An early example is credited to Cromwell. Back in 1641 when England was still getting used to becoming Great Britain, it needed excuses to hold its nearest neighbor tight.

When the Irish got ideas they could do a better job running Ireland than outsiders, they attempted a coup. It failed, which might have been the end of it.

Unfortunately, harrowing accounts were circulated which managed to escalate a passing nationalist cause into a veritable race war that continued for months. Memories of atrocity claims lasted much longer, serving to memorialize massacres that are still revered to this day.

In World War I the Germans were the ones who feasted on baby bones. They bayoneted, they mutilated, and they even had a roving “gas truck” to snuff out newborns.

Alas, it was all too bad to be true. Britain, in one of its final displays of gentlemanly conduct, later admitted these claims were almost entirely propaganda. A baby may have been bayoneted somewhere, but not as a result of standing orders. The infant extermination was bunk, but it got Brits riled up enough to swell the ranks willing to die in soggy trenches.

What seemed like a darn good way to save preteens in 1960 had by 1970 become a boondoggle where only our extrication could protect adolescents. It was a rare instance of “The Children” being used to play both sides of the policy fence.

Before the First Gulf War, Saddam Hussein was accused of all manner of atrocities that turned out to be false. That isn’t to say you would want him to host your dinner party, but tales of him feeding his people into wood chippers proved to be fanciful.

Rumors spread that mean ole Saddam ordered troops to pull babes from incubators and dash them on the ground. Why exactly would he want to do such a thing? Evidently no one in Congress or among the newsreaders thought to ask. One person who certainly wasn’t going to tell was the volunteer who testified to witnessing it happen.

This might have been because she didn’t have an answer, being she was not actually a nurse and instead the Kuwaiti Ambassador’s daughter. What would have taken all of five minutes to disprove was instead used as one of the major rallying cries to sacrifice around 500 American soldiers and waste about $62 billion dollars. Expensive incubator babies, indeed.