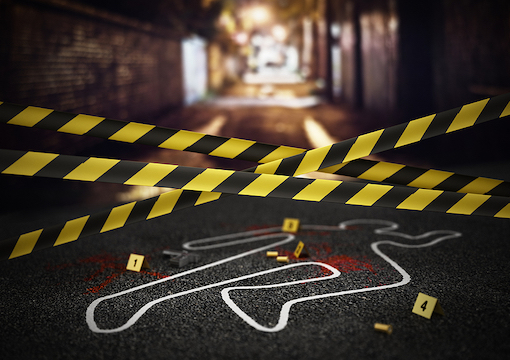 With an election coming up, various well-known Democrats haven’t been able to keep themselves from arguing with me on Twitter about crime statistics, which tends to be an imprudent idea.

For example, David Simon, creator of the famous TV show about black crime in Baltimore, The Wire, has been furious at me for days. It’s hard to quote our debate because he blocks me on Twitter, so it has to be carried on through gleeful intermediaries, but it seems to go more or less like this:

Sailer: Judging from my watching ‘The Wire’ and reading CDC and FBI crime stats, Baltimore has a high homicide rate.

Simon: Not for wealthy white gentrifiers like me, you racist!

The ditch Simon has decided to die in was his assertion that a white person is no more likely to die by homicide in Baltimore than in Boise, Idaho.

So, I looked up the CDC’s death-by-homicide stats for Baltimore City (6.2 homicides per 100,000 non-Hispanic whites over 2018–2021) and Ada County, where Boise is: 1.3 or one-fourth as much. In indirect reply, Simon objected, not unreasonably, to my comparing a city with a county. Then a reader tracked down the homicides for just the city of Boise and they were almost the same: 1.5. So, Baltimore is about four times as dangerous for whites as Boise.

But, of course, Boise, which in the 2020 Census is 82.6 percent non-Hispanic white, merely 9.0 percent Hispanic, and only 1.6 percent black, is extremely safe. One reason is that a sizable fraction of Boise’s whites are mild-mannered, sober Mormons. So Simon is unlucky that alliteration drove him to compare his beloved Baltimore with ultra-safe Boise.

Yet, Simon has a point: Whites die by homicide in five-eighths black Baltimore no more often than do whites in three-eighths black Mississippi. Of course, East Coast Catholics and Jews tend to shoot each other less often than do inland Protestants, so white Baltimoreans dying that much ought to be concerning to him.

Still, considering how extraordinarily homicidal blacks in Baltimore have been during the Black Lives Matter era, the moderate white violent-crime death rate in Baltimore may strike some as a surprise.

“Of course, being Republicans, the GOP can’t actually come out and tell the exact truth: Homicide in the U.S. is basically a black problem.”

After decades of black-crime-driven white flight, Baltimore more or less stabilized in the late 20th century with the remaining whites being able to afford defensible whitopia neighborhoods like Simon’s historic Federal Hill. But hundreds of thousands of whites who couldn’t afford expensive real estate fled to where safety for their children is more affordable, such as Baltimore County and Boise.

It was widely hoped that the 1992 construction of the Baltimore Orioles’ beloved ballpark at Camden Yards (the landmark first retro-look stadium) would spark a white renaissance in Baltimore after generations of white decline. But the 2015 Black Lives Matter riots over the death of Freddie Gray and the subsequent Ferguson Effect crime surge appear to have dented those dreams.

Yet, for the 27.3 percent of Baltimore that is still white, life can be nice. Indeed, Baltimore’s quaint Federal Hill district where the successful writers live (average household income is $118,000 and 95 percent of its residents are U.S. citizens) sounds great.

A reader of mine included an ode to his life on Federal Hill in one of his novels. If you are an old newspaperman, imbibing on the historic streets where the even older newspapermen H.L. Mencken and Edgar Allan Poe caroused sounds like heaven. On the other hand, Federal Hill struck me as a slightly claustrophobic version of paradise since it’s only seventy acres and you don’t want to wander too far outside it.

If you get offered an ER surgeon job at Johns Hopkins, you can afford a nice place to live in Baltimore where you’d be quite safe. If you are a working-class white, however, without a nepotistic connection to a union job, your wife and kids would be safer in Boise.

Similarly, James Surowiecki of The New Yorker tried to frame his statistical challenge to me narrowly enough to have a puncher’s chance of landing a telling blow:

In other words, are only poor blacks at fault for the huge black vs. white murder rate gap?

Harvard economist Raj Chetty has put together a vast database that can answer that question. Somehow, he talked the IRS into giving him just about all your 1040 returns (anonymized) from 1996 to 2000. And he compared all the boys’ childhood incomes to the identities of everybody incarcerated on Census Day, April 2010. Here’s The New York Times’ graph of his findings:

Clearly, at every income level as a child, black men are far more likely to get themselves incarcerated as an adult than are whites. And the racial ratio even increases with adolescent family income, from 3.2 blacks to whites incarcerated at the national 20th percentile of income, to 3.7x at the 50th percentile, and to 5.9x at the 80th percentile.

Because Republicans are finally getting around to emphasizing the crime issue. The numbers of cars stolen recently from Hyundai and Kia owners alone might be enough to tip the House Republican.

Not surprisingly, Democratic pundits are dismayed that Republicans have the unmitigated gall to campaign against the enormous crime surge unleashed during the mostly peaceful protests that followed George Floyd’s demise.

Of course, being Republicans, the GOP can’t actually come out and tell the exact truth: Homicide in the U.S. is basically a black problem.

The latest FBI crime statistics were even more ramshackle in methodology than earlier years, so I don’t know how much to trust them. But they reported that blacks made up 60.4 percent of known murder offenders in 2021, up from 55.9 percent in 2019.

The CDC reports just on the race of the victims of homicides without trying, like the FBI, to determine the race of the perps. Then again, most murders are intraracial. The CDC says blacks made up 55.0 percent of victims in 2021, up from 52.0 percent in 2019.

But Republicans feel uncomfortable citing official crime statistics by race, so they prefer to blame Democratic mayors of big cities.

Because practically all big cities are Democratic, it’s hard to test statistically how much worse Democratic politicians make black proclivities.

One approach is to look at the level of urbanization, since there is a high correlation between population density and voting Democratic. The CDC reports on six levels of urbanization, ranging from counties that form a “Large Central Metro,” such as Cook County in Illinois, down to purely rural “NonCore (Nonmetro).” (The second level, “Large Fringe Metro,” includes suburban counties around big cities, such as DuPage County west of Cook County, so it interrupts the descent in density.)

The main thing that stands out in this graph is the immense black vs. white gap: In total, across the country, blacks died violently 10.8 times as often as whites last year.

Unsurprisingly, all groups behave least lethally in the suburban counties outside big cities, which traditionally tended to be affluent and run by moderate Republican politicians.

As the Republican theory would imply, blacks are at their worst in Large Central Metros, with homicides rates 56 percent higher than in the most rural counties: 42.4 per 100,000 compared with 27.1.

But the density trend isn’t strongly consistent. And it might have more to do with what you might call the critical mass theory of black-on-black homicides: As with the uranium in fission bombs, the more blacks are around, the more likely one is to set another one off.

Another theory beside voting for Republican politicians is that having armed, ornery whites around out in the country encourages blacks and Hispanics to behave better. With whites, it’s the other way around: The homicide rate increases from 3.2 per 100,000 in big cities to 3.9 in the sticks.

Hence, the black-to-white ratio of homicide deaths is worse in big cities (13.3 to one) than in the hinterland (6.9x).

Democratic pundits like Simon tend to be urbanites who are extremely uncomfortable in the countryside around armed whites. Thus, Democratic gun-control energies, other than those of Mayor Michael Bloomberg in New York, tend to be pointlessly devoted to preventing rural rednecks from buying rifles at Walmart rather than to having cops disarm black criminals packing illegal handguns a few miles from where they live.

The national increase in homicides from 2019 (pre–George Floyd) to 2021 (post-George Floyd) was 43 percent for blacks and 41 percent for Hispanics vs. only 20 percent for whites. Black and Hispanic homicidal deaths went up 48 percent each in the metropolises.

So, there’s a modest amount of evidence to support the Republican talking point that big-city Democratic politicians made things worse. But the most obvious problem is that the “racial reckoning” against law enforcement egged on first blacks in 2020, and then Latinos in 2021, to carry more illegal handguns in their cars and waistbands, and thus shoot each other at social events more often.

Until Republicans feel free to point that out, they are likely to continue to be victims of Democratic obfuscations.