The Geography of Homicide 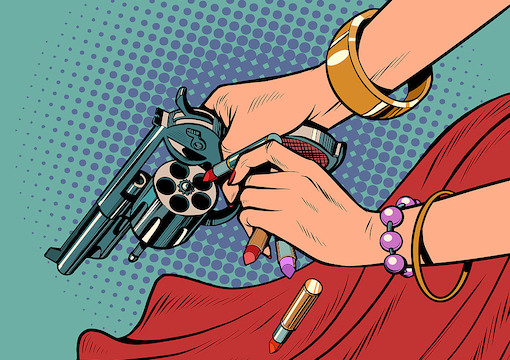 Everybody has an opinion on matters of crime and race, but not that many people are familiar with the facts. So I’m going to devote this column to furnishing basic data about the best documented and most important crime, homicide.

The single most important fact about crime in the United States is the extraordinarily high rate at which African Americans die violently: almost ten times the rate of white Americans. That’s one of the most gigantic racial ratios in all the social sciences. 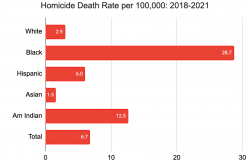 In contrast, Hispanics, who are roughly comparable to blacks in average income, education, and age, die by homicide just over twice as often as whites. The black homicide death rate is thus 4.8 times the Hispanic rate, a gap that is hard to explain in any politically correct fashion, so almost nobody ever mentions it. 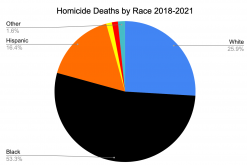 The second-highest homicide rate is among American Indians, who die violently over four times as often as whites. Asians get killed only half as much as whites.

Despite making up only about one-eighth of the population, over half of homicide victims in the U.S. are black, with a little over a quarter being white. In all likelihood, a pie chart of perps would be even more lopsided.

My source is the CDC’s WONDER database for mortality statistics from 2018 to 2021, which tracks deaths by homicide. (Homicides are a superset of murders and manslaughters, including both crimes and justifiable killings. But homicides tend to be an informative proxy for murders.)

Note that the CDC tracks the race of victims, but not the race of perpetrators. Presumably, the offending rate of groups that get killed a lot, such as blacks, tend to be even somewhat higher than their victimization rate—the FBI counts blacks as 56.5 percent of known murder offenders in 2020—while those with low rates of dying by homicide, such as Asians, probably do unto others even less often than they are done unto. But most killings are intraracial, so counting victims can help us get a general sense of the number of perpetrators.

Crime shot upward in 2020, whether due to Black Lives Matter declaring the “racial reckoning,” the pandemic, increased gun purchases, stimulus checks, sunspots, or whatever. A simple way of measuring the change is to compare total homicides in the two years 2020–2021 with the previous pair of years, 2018–2019. It might not have seemed like it at the time, but in hindsight, 2018–2019 were the Good Old Days.

“Despite making up only about one-eighth of the population, over half of homicide victims in the U.S. are black, with a little over a quarter being white.”

Over the past two years, black homicide deaths shot up 45 percent, Hispanics 37 percent, whites 17 percent, American Indians 16 percent, and Asians (whose victimizations have probably gotten the most publicity per capita) 9 percent.

More concern should be paid to the fact that Hispanics, after becoming notably better behaved since the 1990s, have regressed considerably over the past two years. More than anybody else during America’s tough-on-crime decades, Latinos seemed to get the message. Their murder rate declined relative to blacks and whites (and my vague impression is that they also drive drunk less often than in the 20th century).

But, as The Establishment signaled over the past two years that they were just kidding about rule of law, more Hispanics seemed to have decided that the gringos weren’t serious anymore about law and order.

There’s much discussion in the respectable press about legal gun purchases as being the cause (rather than, more likely, the effect) of the historic increase in shootings. It’s difficult to find statistics on what percentage of murders are committed with legally owned guns, but the CDC data lets you calculate the share of homicides due to gunfire rather than knives, blunt objects, fists, poison, or whatever. Among black homicide victims, 87 percent died by firearms compared with only 56 percent of American Indians, 62 percent of Asians, 63 percent of whites, and 75 percent of Latinos.

As you might guess from rap lyrics, African American culture tends to encourage knuckleheads to use guns to settle beefs. Native Americans are also quite violent, but they aren’t as quick to resort to guns.

America has a high homicide rate for a first-world country, although over half of that number is due to African Americans.

The African American homicide rate is similar to that of cartel-plagued Mexico, and lags Nigeria, South Africa, and Jamaica. According to a U.N. list, the highest-known homicide rate is in the U.S. Virgin Islands, Jeffrey Epstein’s favorite place to relax.

Not surprisingly, within the U.S., a state’s total homicide rate tends to correlate closely with how black its population is: 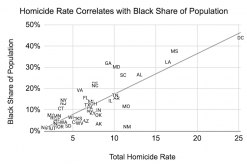 If you count Washington, D.C., as a state, the correlation coefficient is a very high r = 0.82.

New Mexico stands out as a state with a high murder rate despite very few blacks. Georgia, which increasingly attracts middle-class black migrants, is an outlier in the opposite direction, with a relatively low murder rate for its high proportion of African Americans. 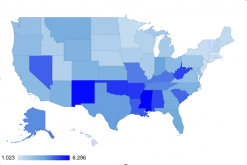 Southern, hillbilly, and Wild West whites tend to get killed at rates more like Eastern Europeans.

The black homicide rate is twice as high in the safest state (Massachusetts) as the white rate in the most dangerous state (Mississippi). States in light blue have missing data: 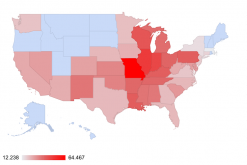 Still, there are major differences among states in the black rate. The pattern, though, is perhaps unexpected: As far as I can tell, blacks tend to get themselves killed the most in states, north or south, near the Mississippi, Ohio, and Missouri Rivers.

In recent years, due to the Ferguson Effect, the black rate has been the worst in the state of Missouri, followed by Illinois, Indiana, and Wisconsin. I don’t have a good sense of whether this is a recent development due to the Ferguson and Floyd Effects, a medium-term reality (possibly due to the hollowing out of American industry), or whether the Mississippi watershed has always had a higher black murder rate. Fischer talked about Louisiana being highly violent ever since its founding by the French, but what about blacks farther north?

One bit of good news is that the black homicide rate tends to be below the national black average in the warmer states that have been attracting black migrants in recent years, such as Georgia, Florida, and Texas. On the other hand, as blacks and immigrants pour into these traditionally business-friendly Republican states, will the new Democratic voters kill the goose that laid the golden egg?

If you divide the black homicide rate by the white rate to get the racial ratio, you’ll find that the races are somewhat less unequal in the South. The lowest black-white ratio at 4.8 to 1 is in West Virginia, where the whites tend to be ornery and the blacks relatively well-behaved. 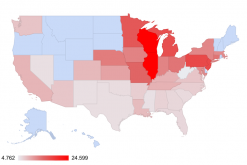 The biggest racial gaps are found in the North Central states with their well-behaved whites, especially Wisconsin and Illinois, where blacks are 25 times more likely than whites to die by homicide. One theory for this is that the Illinois Central railway brought welfare-seeking Deep South blacks to Illinois in the 1960s and then to naive Wisconsin in the 1970s. 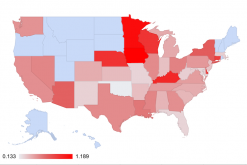 The worst increase was near the epicenter of the Floyd Effect in Minneapolis. Black homicides in Iowa were up 119 percent, in Minnesota 113 percent, Nebraska 93 percent, and Wisconsin (home of the Jacob Blake riots in Kenosha) 92 percent. Kentucky, where BLM had a martyr in Breonna Taylor, also stands out, as do Connecticut and New York.

For a big state, Florida had a relatively small increase of only 23 percent.

Way back in 1760, Ben Franklin wrote a pamphlet attempting to explain to the British government the future world-historical importance of the Mississippi watershed: Whoever ruled it would dominate the 20th century.

But in the 21st century, we seem to be letting the middle of the country fall apart.