Trump Did Not Flip-Flop on Immigration 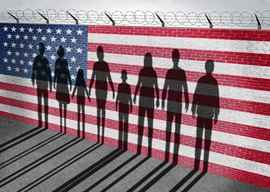 Remember last week when Trump tanked his campaign by flip-flopping on immigration? Few do. It was almost seven days ago and this campaign is about turning every glitch the GOP faces into a nuclear war, then quickly moving on to the next one. Nobody questions the press because by the time the truth comes out, they”re already onto something else. Well, just for fun, I”d like to single out this non-debacle as an example of the kind of fake controversies the media consistently tries to frame Donald Trump with.

Last Wednesday, Daily Wire columnist Ben Shapiro put Ann Coulter on suicide watch by saying, “Somebody take away Ann’s belt and shoelaces.” He was referring to her reaction to the “flip-flop.” I get that she was mad. She’s very unforgiving when it comes to immigration, and her latest book, In Trump We Trust, is largely devoted to the nominee’s strict border policies. New York magazine called her book a “suddenly mistitled opus,” referring specifically to her quote “There’s nothing Trump can do that won”t be forgiven. Except change his immigration policies.” Everyone seemed to agree this was that. On Wednesday, Trump did a town hall with Fox News” Sean Hannity and said, “Take a person who’s been here for fifteen or twenty years and throw them and their family out, it’s so tough…. It’s a very, very hard thing.” Coulter responded with a facetious “Well, if it’s “hard,” then nevermind,” and Shapiro gloated. The general understanding across the political spectrum was that Trump had done an about-face.

“Lawbreakers have to be punished. Why do you need to follow this statement with Maoist efficiency for it to be true?”

Trump never guaranteed he would deport every single illegal alien in the country. The BBC told us he would “deport every single illegal immigrant” and CNN said his “deportation force” would get rid of all 11 million illegals. However, when you go back and look at exactly what Donald Trump said, you realize this whole flip-flop thing was a myth. The Trump who promised to rid America of every single illegal alien is a straw man. When he denies his critics their straw man, they say he’s changing his mind. But that was never his mind in the first place. The left needs to understand that Trump is not a cartoon villain and the right needs to understand he’s not a god. Nobody can guarantee a mass deportation of all our illegals (the educated guess seems to come to at least 30 million, but I think it’s closer to 50 million). A sane man starts with the present and calls for moratoriums on the most troublesome immigrants while promising to build a wall that will prevent future illegals. That’s what Trump has done. As far as those who are already here, we should do our best to get rid of as many as we can. That’s the promise we are still counting on.

When arguing for the case that Trump has flip-flopped, there were two moments that kept coming up. One is a Meet the Press he did with Chuck Todd on Trump’s private jet. In this interview, Todd rightfully warns of how nearly impossible it would be to deport 11 million people. “You”re splitting up families?” Todd asked while clutching his clipboard, “You”re going to deport children?” Trump very sternly responded with “No. No.” He said what he’s always said, which is “They have to go.” This is true. Illegal aliens have to go.

Lawbreakers have to be punished. Why do you need to follow this statement with Maoist efficiency for it to be true? Drugs are illegal in this country, so if you sell them you need to go to jail, because we are, as Trump put it, “a country of laws.” Now, if you discover that an old man who has never tried pot just bought his son a grow lamp, technically you have to arrest him. This is the law at its worst, and it’s “very hard” to enforce it in a case like this. That’s all Trump has said. The media is taking this and treating it as though Michael Botticelli thinks heroin is cool.

They do the same with abortion when they ask, “What about a girl who was raped by her father? Does she have to keep the baby?” If the pro-lifer says no, he or she is now pro-choice. This is how liberals operate. If it’s not 100%, it’s 0%. They”re all over the map when it comes to their own pescatarian values and Hillary literally gets away with murder, but if they can find one exception or any kind of inconsistency on the right, the entire GOP is a lie. Pro-lifers think abortion is murder. They are against “it.” Trump hates illegal immigration. He is against “it” and thinks “they” have to go. He’s never put a number on “they” because it’s about the idea (an idea Hillary says is “absurd, inhumane, and un-American”). The fact that Trump recognizes it’s hard to deport a law-abiding illegal who’s been here twenty years and has American children doesn”t make him a hypocrite. It makes him human. If Trump gets only 20 million to leave and 10 million remain, he hasn”t failed. He’s probably done 40 million better than Hillary.