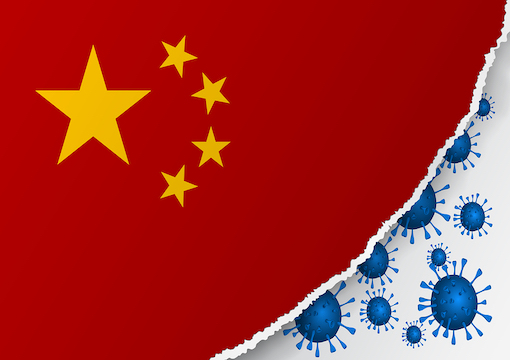 If you disagree with the theory that Covid was Frankensteined in a Wuhan lab, you’re a Holocaust denier. And America First “nationalists” should spend their time fighting for the freedom of the Chinese people.

So says one of the right’s leading “populists.”

Welcome to this week in MAGA glue-sniffing.

Remember 9/11? I certainly do. I also remember the creeping sense of dread I felt when I realized that President Bush was going to waste all that post-9/11 momentum and goodwill on a pointless war in Iraq. Don’t get me wrong, I’m no peacenik. I totally wanted to go full Keyser Söze on everyone even remotely involved in the attack (“kill their kids, kill their wives, kill their parents and their parents’ friends”). But Iraq was a distraction that neither avenged 9/11 nor kept our focus on the Islamic terror that inspired it.

Sometimes there’s no stopping a bad idea. Speaking of which, the “Wuhan lab” claim is fast becoming Trump’s WMDs.

Following SARS and avian flu, both of which came from the wet markets, China was urged by science and health professionals worldwide to close the markets and curb the exotic-animal trade. The Chinese government and the Chinese people refused to comply. Following the Covid outbreak, the Chinese government allowed residents of Wuhan to travel abroad, while restricting their travel within China, all while covering up Covid’s human-to-human transmission. China is the sole villain here. Trump has been handed a situation in which the U.S. has a clear moral edge. A wise leader could play that to his benefit, but leave it to Trump to make glue from a gift horse by ignoring China’s actual misdeeds in favor of the unfounded lab-created-virus hypothesis.

Naturally, the Chinese are thrilled to see the debate shift from all the foul things they actually did to the one thing they probably didn’t.

The key arguments for the lab-virus theory fall apart upon examination:

“The Wuhan wet market didn’t sell bats!” Irrelevant; as with SARS and MERS, it’s not the bats but the intermediary animal that passes the disease to humans.

“There are no bats within 900km of Wuhan!” Irrelevant; there were no SARS-carrying bats within 1,000km of the wet market where SARS began.

“The Wuhan Institute of Virology (WIV) is right next door to the market!” False; it’s 30 minutes away and across the Yangtze.

Then there’s the position taken by rocket scientist Mike Pompeo: “Okay, Covid wasn’t engineered on purpose, but it ‘escaped’ from a lab by accident!” That’s horseshoe-batshit crazy. The bat virus RaTG13 (which was being studied at the WIV) is not SARS-CoV-2 (Covid). You don’t get Covid if RaTG13 accidentally spills on your shoe. SARS-CoV-2 is related to RaTG13 and shares similarities with a pangolin virus. It either evolved/recombined in nature like SARS and MERS, or it was engineered by man. You can’t have the lab theory without “on purpose.”

“Trump’s ‘Wuhan bioweapons’ are like Bush’s Iraqi WMDs, but with even less proof of their existence.”

With no actual proof to support the lab theory, the Trump administration has taken to hiding behind the “secret evidence” shield (“There’s substantial evidence for Covid lab creation…in classified dossiers that we can’t share. But trust me, it’s there!”). And the conservative press has accepted that unquestioningly, relying on anonymous sources, and citing as “evidence” the fact that mainstream news organs like The Washington Post and The New York Times are talking about the lab story.

Apparently, we learned nothing from Russiagate. For three years, conservatives have been preaching, “Don’t trust secret dossiers! Don’t trust anonymous sources! Just because something is discussed in the WaPo or Times doesn’t make it true!” Russiagate imploded, impeachment fizzled, and now we’re the ones touting secret dossiers, anonymous reports, and “Hey, the Times talked about it, so it must be true.” Tucker Carlson literally said on April 16 that the only proof he needs for the lab theory is that “informed people” he cannot name, with access to “classified intelligence” he has not seen, claim it’s true.

Funny enough, I did some research and discovered to my amazement that this “Tucker Carlson” individual hosts a TV program where for the past three years he’s slammed the media’s use of unseen intelligence reports and unnamed sources regarding Russiagate.

Same exact guy. I was floored.

Also, it turns out there aren’t two Texas congressman Michael McCauls, either. The one who co-wrote a Houston Chronicle op-ed on April 24 stating (correctly) that “China’s wildlife markets and wildlife trade” are to blame for Covid, and if we don’t close them down this time (as we failed to do after SARS) we’re sowing the seeds of the next pandemic, is the same Michael McCaul who, four days later, declared on Eric Bolling’s America This Week that wet-market culpability is a ruse by the Chinese government to distract from Covid’s creation in a Wuhan lab.

It’s this kind of buffoonery that prompted Australian prime minister Scott Morrison to lash out last week at Trump’s preoccupation with the lab theory. Australian intelligence officials exposed one of Trump’s “secret Wuhan lab dossiers” as nothing more than a collection of news clippings, and Morrison flatly stated that Trump’s lab obsession is hampering efforts to force China to shut the wet markets for good.

Trump’s “Wuhan bioweapons” are like Bush’s Iraqi WMDs, but with even less proof of their existence. Just as Bush’s WMDs were used to justify a supposed war against Muslim terror that only ended up creating more Muslim terror, Trump’s bioweapon infatuation will only increase the likelihood of more Chinese pandemics by, as Morrison pointed out, impeding efforts to stamp out zoonotic diseases at their actual source.

It gets worse: In response to a previous column in which I criticized Bannon for calling the Chinese “the single biggest victims” of the Covid pandemic, Bannon, citing my column on his podcast, stated that he’s proud of “the fact that there are populists and nationalists out there, Peter Navarro and myself and others, that are arguing for the freedom of the Chinese people.”

Yes, according to Bannon, American “populists and nationalists” should be “arguing for the freedom of the Chinese people.”

He’s quite a patriot, that guy. On his list of favorite nations, America is definitely in the top ten.

And just for good measure, Bannon responded to my critique of his China views by calling me a “Holocaust denier!” Yes, he parroted the exact same slander the SPLC and ADL routinely employ against me.

The corrupt and vile SPLC serves as a defamation machine against the right. But “rightist” Bannon will mindlessly repeat SPLC lies if it helps him deflect from an argument he can’t win on facts (I mean, I’m not even remotely a Holocaust denier—I have a judicial ruling to prove it!—but even if I were, what the hell does that have to do with my criticism of Bannon’s China position?).

There’s a running theme here—a right-wing lack of coherence and a plethora of contradictions:

Let’s prove how “America first” we are by focusing on “freedom for the Chinese people.”

Yes, the left is hypocritical too (as the Tara Reade episode quite clearly demonstrates), but there’s a difference. Leftists (and, for that matter, neocons) have clearly-defined goals; the lies and hypocrisies they employ have a practical purpose. For them, it’s the destination, not the journey. The MAGA right is the exact opposite: no vision, no goals, just an obsession with “tactics” and skirmishes. It’s the fight that matters. War! Weaponize! Bloodsports! Trump the insult comedian, Trump the master of the confrontational tweet and the raucous rally.

But for what? What’s the goal, and has any of this nonsense helped us achieve it? Yes, we “defeated Killary.” MAGA Twitter still celebrates that like it was yesterday, with all-caps exhortations to “build the wall” and “drain the swamp” and “lock her up”…like it was January 2017.

Well, it ain’t. And while we have no wall, we certainly have plenty of birthright citizenship, chain migration, foreign workers, and career swamp creatures. And plenty of dimwit pseudosoldiers playing political MMA because it’s short-term satisfying.

Yes, we “beat Hitlary.” But for what purpose? Just for the sake of it? Foundationally, nothing has changed regarding immigration, and even with polls showing widespread support for an immigration moratorium in the wake of Covid, the best Trump can muster is a worthless memo that leaves the foreign-worker doors wide open.

Wuhan lab mania is emblematic of all that’s unwell on the right: lots of tough talk by toddlers playacting James Bond, fighting phantom villains while accomplishing nothing in the real world as the actual villains skate. Principles ignored and goals betrayed because we become distracted by bright shiny objects and fantasy cosplay. Yeah, it’s a lot of fun to battle Chinese Frankenstein. And yeah, if anonymous sources and phony intelligence reports weren’t such easy fixes for evidentiary gaps, no one would use them. And if screaming “anti-Semite” weren’t effective, the ADL and SPLC would be out of business.

So have fun, Frankenstein fighters! The best of times is now; tomorrow is too far away.

And besides, it’ll be a tomorrow filled with new pandemics and demographic detritus. If I were you, I’d want to live for today too.