T(y)ranny Triumphant, Part II: Zhe Who Controls the Past… 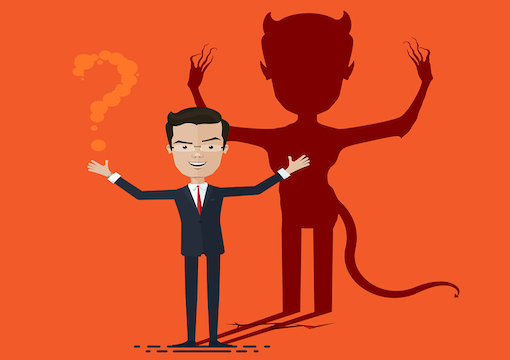 The Internet Movie Database (IMDb), owned by Amazon, is the online bible of the entertainment industry. It’s the who’s-who resource used by networks, studios, producers, directors, agents, managers, and everyone else who matters. For actors, their IMDb page is their calling card. It’s what casting directors consult when considering someone for a role.

As a rule, “undiscovered” actresses never tell people their true age. I can’t blame them. In this business, 25 is considered over-the-hill. And 30? Pack it in, granny. If you’re an actress who’s yet to attain the job security of an A-lister, it’s best to keep ’em guessing about how old you are.

In January 2005, my lapsed Mormon girlfriend Amanda woke up to find her birthdate posted on her IMDb profile. Catastrophe, as she was 25, and her Logan’s Run palm flower had just changed to black. IMDb had added Amanda’s birthdate (without her consent) after discovering it on an LDS-run website of Mormon actors. Amazon’s Seattle HQ told me point-blank that unless I could show that the birthdate was wrong, there was no way it would be removed.

Accurate information, no matter how it was added or by whom, is never removed from IMDb. That policy, Amazon told me, is ironclad and inflexible.

In the following years, I began noticing stories in the trades involving actresses who’d tried to get birthdates and other personal data removed from their IMDb page, only to be similarly rebuffed. IMDb’s “no removal of accurate data” policy soon attracted the attention of stalkers and jilted suitors. What better revenge against that actress who rejected you than to tell the entire industry her true age or birth name?

Year after year, Amazon/IMDb refused to bend. Accurate data is not removed, even if it was added maliciously. Women have no consent in the matter.

Enter Junie Hoang, a Vietnamese-American actress who, as Asian women often do, looks way younger than her age. Hoang had a steady if unimpressive list of movie credits…until IMDb queered the deal by adding her birthdate to her profile. Turns out Hoang was much older than she’d been letting on. And once IMDb added the birthdate, producers and casting directors stopped calling. The work dried up, and in 2011 Hoang sued Amazon and IMDb.

The depositions from the case are not available online, but I have copies courtesy of one of the involved parties. Let’s examine a few key moments from those depositions (viewable in full here).

Adrian Garver from Amazon’s legal department was deposed in August 2012. Hoang’s attorney asked Garver how many times, during his seven years as Amazon’s IMDb counsel, had women threatened legal action because their birthdate had been added to their profile against their will.

Garver: I really don’t know. I don’t have a specific number.

Attorney: All right. So would it be more than one in those seven years?

Attorney: More than five in the seven years?

Attorney: More than ten in the seven years?

Attorney: More than fifteen in the seven years?

Attorney: Can you recall a time in the last seven years where you were involved in a case where a date of birth was removed because of a complaint?

Garver: To my memory, no. “Amazon has used its power and influence to facilitate the erasing of history.”

“Amazon has used its power and influence to facilitate the erasing of history.”

Next up was Giancarlo Cairella (also deposed in August 2012), who claimed to be IMDb’s customer-service rep until Hoang’s attorney pointed out that his LinkedIn page also lists Amazon as his employer (this is part of a pattern during the case of Amazon trying to separate itself from the actions of its subsidiary). Cairella explained why the birthdates were never removed:

Cairella: Well, our policies generally are that if information is correct, we don’t remove it…. We would remove anything incorrect, and that’s about it.

Attorney: Does IMDb have a policy for removing data that the person who’s the subject of the listing doesn’t want listed?

Cairella: Not wanting something listed is not a reason for which we would change or remove information…. We don’t remove or change factually correct information.

“Deadnaming” is the “hate crime” that occurs when someone refers to a tranny by their pre-transition name. Junie Hoang is not a tranny, but she did change her name from her Vietnamese birth name of Huong Thu Hoang. And for some odd reason, Cairella, when responding to Hoang’s emails about her birthdate, kept “deadnaming” her by using the old Vietnamese birth name. Hoang’s attorney asked Cairella why he used the “dead” name. He responded that “Geoff Leonard, who was the manager of our biographical information at the time,” wrote a memo explaining that after accessing Hoang’s credit-card and billing information, he’d come to the conclusion that “Possible [sic] Junie Hoang is not her real name.”

Yes, two employees of Amazon/IMDb exchanged memos debating the real name of a small-time actress whose only crime was asking for her birthdate to be removed.

Cairella admitted using PrivateEye.com, a personal data search site often employed by stalkers, to get the goods on Hoang’s real identity and birthdate. Amazon also requested Hoang’s Vietnamese birth certificate, which she provided, but the company decided to rely on the PrivateEye results instead.

Amazon, one of the largest corporations in human history, was obsessively conducting stalker searches to expose the personal details of an unimportant bit-part actress, all in the name of being an exhaustive, incorruptible source of accurate data for the entertainment industry.

In a follow-up deposition, Cairella restated why, once he’d completed his intrusive excavation of the life of Junie Hoang, he continued to refuse Hoang’s requests to have her personal info removed from her profile:

“Not wanting something listed is not something that we consider as a valid reason for removal…. Our policy [is] that we will not remove factually correct information.”

Amazon/IMDb publicly listed a woman’s birthdate without her consent (not just a woman, but a nonwhite immigrant!). The woman dared to complain, and in response to her complaint, Amazon/IMDb dug up the woman’s personal details, deadnamed her, demanded a birth certificate and then dismissed it because it was “Vietnamese,” and in the end decided that her personal info would stay on her profile because of Amazon/IMDb’s unbreakable policy of never removing accurate data.

Hoang lost the lawsuit, and understandably so. Amazon/IMDb has a right to its policies, no matter how cruel. In response, the state of California passed a law in 2017 mandating that IMDb allow women control over the personal data that’s listed on their profiles. The law was backed by SAG/AFTRA. In 2018 a U.S. district judge tossed the law in the trash. That was also justified. Again, Amazon/IMDb has a right to its policies, dickish though they may be.

But let’s recap just how hard Amazon and IMDb fought to keep that “right.” They conducted exhaustive background searches on a struggling, undiscovered actress, they fought off a lawsuit, they lobbied against a proposed state law, and they went to federal court to kill the law after it was passed. All that effort, just to preserve their right to publicly blast the personal information of women without their consent. All that effort, just to retain a policy that harms the careers of actresses, encourages revenge trolling, and prevents women from having control over their professional identity.

And remember—Amazon/IMDb justified that effort, and those expenses, by repeatedly citing their unbreakable rule: “We never remove factually correct personal information for any reason.”

Unless you’re a tranny.

In August of this year, trannies demanded that IMDb erase the “birth details” of anyone who “transitions.” Any factual biographical info that a tranny rejects because it represents his/her/its “old self” must be removed, the trannies insisted.

And Amazon/IMDb responded, “You betcha!” Literally, just like that, Amazon/IMDb said, “We’ll remove biographical info from the profile page of a tranny, even if it’s factual.”

Junie Hoang and dozens (maybe hundreds) of other actresses asked Amazon/IMDb to give women control over how their personal info is displayed. And again and again, Amazon replied, “We will not remove accurate biographical info even if the woman in question wants it removed, and even if the presence of that info harms that woman’s life or career.”

But when trannies asked for a special exception just for them, Amazon/IMDb rolled over like a dog.

The prohibition on allowing actual females to remove their personal data still stands. Junie Hoang’s age is still up on her page, because she’s “cis.”

There’s no better proof that what trannies are demanding is not equal rights, but special privileges. The bigger question is, why did Amazon cave so quickly? Why did it spend untold hours and dollars fighting a woman (a nonwhite woman) in court, only to bend immediately to trannies?

Last week’s column was about how the left is willing to sacrifice feminists to the tranny agenda, because the tranny agenda represents an all-out assault on the very notion of “normal,” and destroying normal is what the left wants more than anything. Amazon surely understands the importance of trannyism to the left, and the path of least resistance was to cave to the trannies’ demands.

But to those who’ve made the annihilation of normal their singular goal, the decision by Amazon/IMDb represents more than just another instance of tranny favoritism. Amazon/IMDb has aped Wikipedia, which also has a policy that allows trannies to erase the history of their former selves. Wikipedia and IMDb are supposed to be encyclopedias, archives, reference works. They’re supposed to document and preserve data for the historical record. But whereas Wikipedia’s ideological biases are well-known and inevitable due to the site’s decentralized, “communal” nature (which ensures that the loudest and most fanatical trolls—I mean “editors”—prevail), IMDb is centrally controlled, and by a corporation that wields enormous power and influence.

And now Amazon has used that power and influence to facilitate the erasing of history. Not only is any man who says he’s a woman magically a woman, but any record of his life as a man is to be erased, even on sites that were designed to coldly and objectively record facts.

The tranny cult isn’t just about warping present-day reality; it’s also about erasing the past. It’s about forcing us to believe not only that a man in a dress is a woman, but that he’s always been one.

Gaslighting us Terminator-style by going back in time to erase the inconvenient past of people who have decided to “reinvent” as someone else.

“The devil’s finest trick is to persuade you that he does not exist.”

And that he never did.