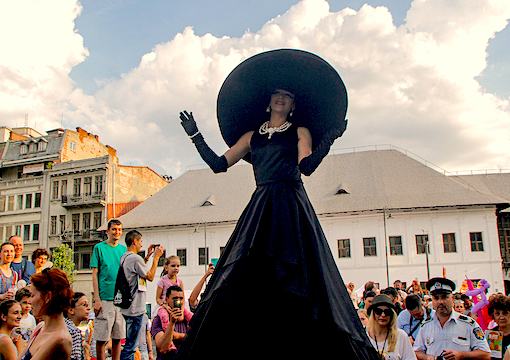 The fringe theater festival movement is one of the countless liberatory and transgressive developments in the Western arts in the 160 years since the 1863 Salon des Refusés featured French avant-garde painters rejected by the Paris Salon for not subscribing to the stodgy preferences of the Académie des Beaux-Arts. But it has finally run into a line too shocking to allow to be spoken on stage: “There are two sexes, male and female.”

Yes, sure, artists are supposed to épater les bourgeois and all that. But these days, some people, such as self-proclaimed nonbinaries, are just too sacred to disagree with.

Fringe theater traces back to the 1947 Edinburgh International Festival of opera, ballet, theater, and other performing arts when eight uninvited acting troupes put on shows “on the fringe” of the official events. This practice grew for a decade before becoming (somewhat) institutionalized in 1958 with the founding of the Festival Fringe Society, dedicated to helping the uninvited performers by furnishing economies of scale in ticketing and marketing.

Strikingly, the Fringe Society rejected any selection of acts:

The founding principle at the heart of the Fringe is to be an open access festival that accommodates anyone with a desire to perform and a venue willing to host them. No single individual or committee determines who can or cannot perform at the Fringe; the Fringe Society does not run any venues or programme any performers.

Instead, the Fringe relied on the magic of the marketplace to sort the talented from the delusional.

It seems to have worked. The Fringe became wildly successful, enjoying numerous historic firsts, such as the 1966 debut of Tom Stoppard’s Rosencrantz and Guildenstern Are Dead.

Over time, because the economics favor one-man shows, the Edinburgh Fringe has become the British Isles’ biggest showcase for live stand-up comedy.

Looking forward, the Fringe was an early flowering of the ’60s antiestablishment spirit. Over subsequent decades, fringe theater festivals spread across the world, with dozens annually in the U.S. They elevated nondiscrimination to a new height: If there are too many applicants for the number of stages available, performers are selected by lottery. Traditionally, fringe festivals describe themselves as “unjuried” and “uncensored.”

Looking backward, the Edinburgh Fringe was related to the famous “secessions” of younger visual artists from official exhibitions that used to enliven the cultural world from the time of La Bohème onward.

You and your painter pals would get tired of being turned down by the official art show, so you’d issue a manifesto about how your innovation in aesthetic theory means it’s your time now, and then you’d put on your own exhibition to prove it.

For example, the Impressionists, such as Monet and Renoir, forswore in 1874 to no longer participate in the Paris Salon contest but instead to exhibit together. This legend of antiestablishment rebellion combined with how utterly lovely are so many of their paintings has helped make Impressionism perhaps the most broadly popular style of art.

Oddly, the first famous secession, the 1863 Salon des Refusés of paintings by Manet, Whistler, Courbet, and others of the pre-Impressionist avant-garde turned down by the Salon, was sponsored by the Emperor Louis Napoleon. Personally, he liked the traditional Salon style of history painting just fine. But he didn’t want the new generation of artists and their fans to be mad at him, so why not let them have their own show? (Generally speaking, when reading about Napoleon III, it’s easy to imagine Donald Trump in the same situation doing much the same thing.)

Similarly, the famous Vienna Secession of 1897 led by the famous painter of rich women’s portraits, Gustav Klimt, was government-subsidized.

As Tom Wolfe gleefully pointed out in The Painted Word: The anti-bourgeois painters retreated to “the heights of Montmartre and Montparnasse, which are what?—perhaps two miles from the Champs Elysees.” Bohemian artists want to remain within walking distance of the rich and powerful because those are their customers.

But still, everybody’s a little hypocritical about making a living. What’s more interesting is that young men would band together and announce that they had New Ideas that demand a viewing or hearing…and other people paid attention and even found these examples of masculine self-assertion appealing.

We still occasionally hear about guys issuing manifestos enumerating their novel artistic principles, such as the 1995 Dogme 95 low-budget art movie movement led by filmmaker Lars von Trier. But my impression is that this kind of febrile creativity is of less interest in the 21st century than in the previous 150 years or so. Frankly, artistic innovation sounds like a white male pastime, and what could be worse than that?

Today, artists mostly seem to declare themselves worthy of Establishment patronage based on how intersectional they are rather than for having dreamed up new concepts. (Of course, the easiest way for white arts workers to boost their diversity Pokémon points is to declare themselves trans.)

We are supposed to take it on faith that more demographic diversity means more and better ideas, as Justice Lewis Powell explained in his 1978 Bakke decision authorizing racial quotas (so long as you don’t call them “quotas” but instead label them “goals” or some other euphemism). Empirically, Powell’s fond hope that an artificially “diverse student body” would contribute to a “robust exchange of ideas” has been crushingly disproven over the past 45 years as campuses have become minefields where in-over-their-heads students have become empowered to have their betters canceled.

Instead of a robust exchange of ideas, the growth in diversity has meant ever-increasing appeals to authority to crush skepticism, even in realms as intentionally anarchic as fringe festivals. Marc Tracy reported in The New York Times:

Since its 2007 founding, the Frigid Fringe Festival in New York has selected the plays it produces randomly, like many other fringe festivals around the world that aim to highlight voices from outside the theatrical establishment. It boasted that it was both “unjuried,” since it did not rely on gatekeeping panels, and “uncensored.”…

“In November, I boastfully said to an entire room full of fringe producers in North America that I would allow a show to happen no matter what,” [founder Erez] Ziv said. “But then it happened: We actually got a show that I just couldn’t ask my staff to work.”

What could possibly have shocked a fringe festival producer?

An aged slam poet and street musician named David Lee Morgan, an old-fashioned lefty bohemian who says he moved to Europe forty years ago to march in the anti-NATO nuclear freeze protests, submitted his monologue “Poems on Gender.”

In sometimes elliptical language, “Poems on Gender” raises questions about how some people define their genders (“You tell me I can’t be your friend/Unless I believe you are a real woman/I can’t do that”) and about transition-related medical care (“You took a rainbow and forged it into a knife”).

As society has gotten more diverse, our culture has gotten dumber. We’ve increasingly transitioned from prioritizing abstract principles to privileging some people (the marginalized, such as transgenders) over other people (the privileged, such as white male buskers).

As we know, nobody is a more vulnerable victim than a man who has decided that you must call him a woman and that if you express any doubts, he will wreck you. What is the Fringe theater movement’s proud 66-year-old tradition of being uncensored compared to his need for power?