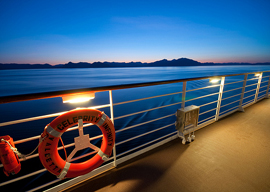 As many readers of Taki's Mag know, America has recently experienced a nasty outbreak of w...

Far From the Sea of Tranquility

Are We All Liberals Now?

Notre Dame taught a clear lesson today, in its decision to have President Obama as a comme...

Since the fall, auto sales have collapsed. This collapse has affected foreign manufacturer...

A Saint on Capitol Hill

When one reads the new atheists, one gets the impression that the influence of Christianit...

In his homily at his inaugural Mass as Pope, Benedict XVI asked Catholics to “Pray f...

If I had to live in the Middle East, I would want to live in Israel, a modern, democratic ...

Where Have You Gone, Sister Aloysius?

When I was young, there was much talk of “the Christmas spirit,” and I’v...

What’s Good For General Motors Is Still Good For America

Back in the 1950s, when Americans knew from recent experience just how important it was to...

A lot of cyber-ink has been spilled over a post by Ross Douthat arguing that grassroots po...

It has long been known that the Nobel Prizes in Peace and Literature are sometimes awarded...

Every so often, someone in the Bush Administration actually makes a sensible point, though...

The Truth About “The X-Files”

There have always been hints that the worldview of “The X-Files” is far closer to paleoconservatism than is generally found in anything emanating from Hollywood. Sam Francis, a avid “X-Files” fan had always been put off by the liberal plot lines he found in other fine examples of television science fiction, such as the “Twilight Zone” or the original “Star Trek.” Unlike those series, “The X-Files” had a certain conservative sensibility, and had not a trace utopia or even progress in the human condition. It’s telling that the first X-Files movie bore the reactionary title “Fight the Future.” Rather than guiding the way to a bright future, Mulder and Scully face the same fundamental problems human beings have always faced, including the persistence of evil.

From Richard to Rowan

The latest validation of James Burnham’s insight that “liberalism is the ideol...

The Court Historian of The Neoconservatives

Victor Davis Hanson has taken umbrage at Pat Buchanan’s description of him as “...

In response to my recent piece on science and religion, one of the commenters, GM, took me...

Darwin, Alone, Is Not Enough

Ben Stein’s movie Expelled has generated lots of commentary, most of it negative.&nb...

They Are The Hollow Men

Last week at NRO, cub reporter Stephen Spruiell announced that he had found what might be ...

It is fitting that one of the signal events of what will likely become the second Bush rec...

One of the stranger aspects of contemporary American “mainstream conservatism” is the obsession with “fascism,” a political philosophy one might have supposed was safely buried under the rubble of 1945 Europe. Neocons have, indeed, used “anti-fascism” to justify all manner of things. On his new “Liberal Fascism” blog, Jonah Goldberg has argued, “conservative dogma is the great bulwark against fascism or fascistic policies in part because it breaks the historic linkage between activist foreign policies abroad and totalitarian impulses at home.” In other words, invading foreign countries at will is now okay and definitely not “fascist””as long as you still want to repeal the “death tax.” Goldberg and all the other budding “anti-fascists” on the right would do well to remember that Hitler is consigned to infamy not because of the Autobahn but because of his own “activist foreign policy,”

In his recent address to CPAC, John McCain told the audience that "I believe...in ...t...

Somehow, one doubts that either the USCCB or Hollywood studios would have taken such a benign view of a film whose villainous organization were named “The Synagogue,” whose villains wore rabbinical rather than clerical garb, and whose author had been quoted as saying “I”m trying to undermine the basis of Jewish belief” and “my books are about killing Yahweh.” Opponents of bigotry would have been outraged”and rightly so.

It is true that the triumph of atheism in the West need not necessarily produce what the triumph of atheism produced in Russia — mass murder and cultural devastation on a scale previously unimaginable. But we already have before us cultural devastation of a different sort, the result of the very assault on faith — both faith in God and faith in our past — that Christopher Hitchens wants to accelerate: a culture centered around self-gratification, with comfort its highest aim; a high culture devoted to ugliness and degradation, and a mass culture marked by tawdriness and vulgarity; a loss of morals and a coarsening of manners, with notions of duty, self sacrifice, and restraint seen as anachronisms at best and tools of oppression at worst. As Waugh wrote, “It is no longer possible, as it was in the time of Gibbon, to accept the benefits of civilization and at the same time deny the supernatural basis on which it rests.” It is time to fortify the admittedly thin and tenuous roots still connecting us to Christendom, not to tear them up and hope for the best. No civilization worth the name has ever been defined by atheism; we are unlikely to create the first.