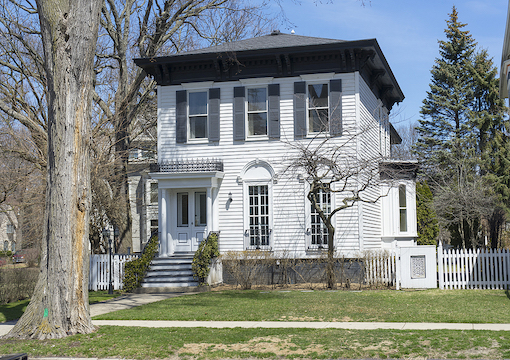 Institutional momentum continues to build in wealthy parts of the country where blacks were historically least oppressed by slavery and Jim Crow for cashing in white guilt over George Floyd as racial reparations before whites wise up (or cynical Asians and Hispanics take over).

For example, posh Evanston, Illinois (where 91 percent voted for Biden in 2020), has already handed out $25,000 reparation vouchers to sixteen black residents, with The Washington Post complaining that’s not fast enough. And the state of Illinois (Biden 58 percent) is gearing up its African Descent-Citizens Reparations Commission.

Likewise, the state of California (Biden 63 percent) has a Reparations Task Force assigned to come up with a proposed payout to blacks (not that California was ever a slave state), with the chairwoman currently talking about six or even seven figures.

“Racial issues for over a half century have mostly been controlled by liberals, but blacks are still fairly poor.”

And now the all-black reparations panel in San Francisco (Biden 85 percent) has posted a 59-page draft plan with 114 enumerated action items, the first being to gift each member of the San Francisco African American Reparations Advisory Committee, along with practically every other black in San Francisco and many elsewhere, 5 million bucks:

1.1 Provide a one-time, lump sum payment of $5 million to each eligible person. Rationale: A lump sum payment would compensate the affected population for the decades of harms that they have experienced, and will redress the economic and opportunity losses that Black San Franciscans have endured, collectively, as the result of both intentional decisions and unintended harms perpetuated by City policy.

You might worry that blacks given $5 million could blow the money like in the 2003 Dave Chapelle sketch and soon be as bankrupt as an ex–NFL player. But they have a plan to deal with that contingency in their second bullet point:

1.2 Supplement African-American income of lower income households to reflect the Area Median Income (AMI) annually for at least 250 years ($97,000 in 2022). Rationale: Racial disparities across all metrics have led to a significant racial wealth gap in the City of San Francisco. By elevating income to match AMI, Black people can better afford housing and achieve a better quality of life.

You and I might marvel at the shameless bald-faced greed of the panel’s demands, but, remember, this is 2023 and shaming blacks would be in inconceivably poor taste. Criticism might encourage them to behave better, and nothing is more racist than the thought that blacks could do better if they tried.

Who would be eligible?

So you can’t cash in immediately by just declaring yourself transracial. This is race, people, not some mere social construct like gender. Follow the Science.

But one additional way to qualify jumps out: be a convicted drug dealer or a drug dealer’s spawn:

Personally, or the direct descendant of someone, incarcerated by the failed War on Drugs

Okay, you might think that if anywhere should pay reparations, it should be former slave and Jim Crow states. But here’s a problem: They don’t have as much money. You see, by 1865, Southern wealth was gone with the wind. And the South stayed quite poor for another century, and still is relatively poor. (It’s almost as if blacks didn’t actually build America like The New York Times’ 1619 Project says they did.)

Hence, much of the targeting for reparations is aimed at places and institutions once at the forefront of abolitionism, such as Harvard, the richest college. They have the money to be shaken down. And the lack of sense, because the history of the United States after Emmett Till’s death in 1955 has largely disappeared down the collective memory hole.

In reality, racial issues for over a half century have mostly been controlled by liberals—for instance, here’s Tom Wolfe’s hilarious short 1970 book on Great Society giveaways to black hustlers in San Francisco, Mau-Mauing the Flak Catchers—but blacks are still fairly poor.

That blacks, after 59 years of aggressive government programs to help them, are still almost as much in need might logically suggest something about black responsibility for their own current state.

But that is unthinkable.

There are no longer any acceptable explanations for racial disparities other than white badness and bad whiteness. For example, on Martin Luther King Day, Joe Biden declared:

Why did the president specify that his thought experiment was restricted to the last quarter century? Probably because that should undermine the conventional wisdom that low home values in black neighborhoods are the fault of FDR’s redlining in 1938. The octogenarian Joe might be the last living New Deal Democrat, plus he always seems to be dancing on the edge of blurting out some politically incorrect observation before yanking himself away at the last moment from the abyss of cancellation.

…And by the way, if you live in one of those [black] neighborhoods and you have the same exact car I have in the other neighborhood, you pay more for your insurance on that side. No basis for it, none at all, other than you’re Black and I’m white.

You know and I know, and, heck, the president probably even knows that there is a “basis for it,” such as worse crime and, lately, worse driving in the Uppercase-American neighborhood. Insurance companies pay a lot of money to their highly intelligent actuaries so that there’s always a basis for whatever they do.

If Biden really wanted to do something to lower auto insurance rates in black neighborhoods, he’d try to reverse the explosion in black bad driving since George Floyd’s death by telling cops he recognizes the disastrous mistake that politicians like him made in 2020, and that we now have their backs once again when they pull over black drivers for driving recklessly.

But, you may ask if you are well-indoctrinated lower-case American, what does the huge increase in black traffic fatalities have to do with redlining and other ancient ills?

Presumably, nothing. And you aren’t supposed to think about current events if they can’t be linked causally to ancestral racism, so nobody, other than Taki’s readers, has even heard of this ongoing disaster.

America has become increasingly antiquarian in its thinking, with redlining under FDR now vastly better remembered than, say, George W. Bush’s push to lend more to minority homebuyers, which played such a critical role in the Housing Bubble.

Strikingly, documents demanding reparations tend to talk less about slavery or Jim Crow than redlining. Why?

Because even Evanstonians and San Franciscans are vaguely aware that there was never slavery or Jim Crow there.

And because housing is ridiculously expensive now—Zillow says the average home price in the heavily immigrant tech capital of San Francisco is $1,439,000. With the failure of the Bush Push to lend more to Latinos and blacks, the only plan left for blacks is “equity”: i.e., taxing away the home equity of whites.

And because to modern antiquarian-Americans, “redlining” sounds like it must have something to do with why home values in black neighborhoods, even ones built in the past 25 years (as Biden specified), are lower. After all, it can’t have anything to do with blacks needing to try to be better neighbors.

Of course, in reality, 2023 home prices have vastly more to do with 2022 crime rates and school test scores than with New Deal bureaucratic decisions, but we’re not supposed to think about our own time.