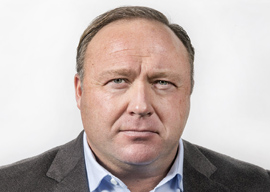 Poor Alex Jones, banned from Facebook, YouTube, Apple/iTunes, Periscope, Spotify, and (temporarily) Twitter. And dudes like me, who were being deprived of platforms long before social media existed, and who were being protested on the campuses of public universities back when lil’ Benny Shapiro was still in his training yarmulke, are left scratching our collective heads.

How’d Jones become the greatest hater of our time? In comparison with a lot of today’s “fringe” stuff, the guy’s pretty mild (I’m not talking about his manner, but his content). When I was promoting my autobiography in 2014, Jones steadfastly refused to have me on his show. “No Holocaust deniers,” his staff told my publisher. “But David’s not a denier, not even close,” my publisher protested. “Doesn’t matter. He’s been called one, and that’s good enough for us. Nazis, statists, fascists…these are our enemies.”

Jones’ contemporaries, like human/poodle hybrid Jeff Rense, had me on. I didn’t like most of the shows I was forced to do (well, “forced” in terms of helping my publisher sell books). I’m not a “truther,” a “vaxxer,” or a “false flaggot” (a term I proudly coined specifically to attack those loons). I had one rule regarding the shows I did: No Nazi/Aryan Nations bullshit (that’s not the company I care to keep). But I’d do the truther and vaxxer and flaggot shows because, as much as I disagree with the views of those hosts, I don’t find them hateful. Saying “Jews are subhuman” doesn’t merit a response. But while saying “Bush and Cheney planted thermite charges in the WTC” might be wrong, it’s not “hatred.”

Since when did anti-government conspiracy theories become “hate speech”? And for the record, I’m against censorship across the board, including hate speech. But conspiracy theories, more so than hateful words, are especially deserving of a forum. If someone says, “Put all kikes in camps” or “Blacks are baboons,” well, you can’t intellectually debate such vile enmity. But it’s good to debate conspiracy theories. Let every vaxxer in the world openly claim that vaccines are creating a generation of ’tards. Then counter those views. It’s how people learn. To a child, yes, it might look like the WTC was “dustified.” So explain the actual reason the towers fell. Conspiracy theories don’t happen in a vacuum. People with a heightened suspicion of government (and that’s not in and of itself a bad thing to have) will always find real or perceived anomalies in any major news story. The “laughing dad” of Sandy Hook, the complete lack of official motive in the Vegas shooting. You don’t deal with that stuff by silencing it. You deal with it by confronting and explaining it.

Arguably the most alarming thing about the war against Jones is the fact that media leftists have been so quick to boast about the activist role they played in getting him silenced. In years past, the “mainstream” press always took a position of “We just report, we don’t influence,” like they’re bound by Jor-El’s stern proscription against influencing human history. And sure, they “influenced,” they just never admitted it. But these days, “respectable” journos are openly bragging about their role in getting Jones deplatformed.

And now, because of those journalistic frauds, here I am, a guy who’s never hesitated to slam conspiracy loons, having to come to the defense of Alex Jones.

Whatever happened to “Though all the winds of doctrine were let loose to play upon the earth, so Truth be in the field, we do injuriously by licensing and prohibiting, to misdoubt her strength. Let her and Falsehood grapple; who ever knew Truth put to the worse, in a free and open encounter?” When I was a kid, Milton’s quote was a sacred tenet of the free press. Now it’s blasphemy. Now it represents the opposite of what the press believes. How the hell did that happen?

This massive new war against “conspiracy theorists” by various muscle-bound arms of the leftist establishment (the media, the tech industry, “social justice” groups, and Democrat politicos) looks far less sincere if examined in light of the wacky conspiracy nonsense that the left has not only tolerated but praised and championed. My good friend Jim Goad beat me to the punch last week by citing the fact that the media has been fine with the “hands up don’t shoot” lie that attached itself to the shooting of jolly dead giant Michael Brown. “Hands up don’t shoot” has been debunked by every single official inquiry into the Brown case. “Hands up don’t shoot” is as false as anything Alex Jones has ever said. Yet pundits and celebrities continue to repeat the untruth endlessly on social media without getting banned. It’s a myth that has without question flamed racial tensions and led to violence, but the Alex Jones banners in the press and the tech industry are fine with it.

Here’s another: White-supremacist mass murderer Dylann Roof was taken to Burger King by his arresting officers. Did not happen. One hundred percent did not happen. Once again, as false as anything Alex Jones has ever said. But no bans have ever been handed down for repeating that lie. And what about Lollipop Guild shop steward Robert Reich’s conspiracy theory that there is no Antifa, just evil false-flagging right-wingers who pretend to be Antifa in order to frame the left? Completely, categorically baseless. But tell that to the social-media platforms that have never banned Reich and the media goons who have never sought to have him banned.

Remember that phony tale about 4,000 Israelis not showing up for work at the World Trade Center on 9/11 because they were “tipped off”? It’s a Jew-baiting myth, and easily debunked. The falsehood stemmed from an intentional misreading of a Jerusalem Post piece, which mentioned “4,000 Israelis believed to have been in the areas of the World Trade Center and the Pentagon at the time of the attacks.” In the areas (in other words, Manhattan and D.C.). Truthers replaced “in the areas” with “in the buildings” (because truthers are falsifiers), and when the 9/11 casualty figures didn’t show 4,000 dead Israelis, the truthers assumed that they must have been “tipped off” to stay home (even though the fiction that they’d been in the buildings in the first place was a truther misrepresentation).

One of the people who took the lead in spreading the “Israelis stayed home” lie was “black power” “poet” and “author” “Amiri Baraka” (yes, even his name merits scare quotes, because his real one was LeRoi Jones). Now, these days the deceased Baraka is reciting “We Wear the Mask” to Mark Essex in hell, but while he was alive, did he ever get banned from social media? Nope. In fact, get this—he got a Sundance Channel documentary that praised his dissemination of the 4,000-Israelis falsehood!

Yes, he was thanked for repeating the conspiracy theory, because, though it might have been untrue, it “made ya think.” Here’s an NPR piece defending his invocation of the myth and stressing the importance of airing such theories. In The New Yorker, staff writer Jelani Cobb, who I suspect may have received one of those mercury-tainted ’tard-producing childhood vaccines, cheered the fact that Baraka spread the anti-Jewish distortion (yes, he applauded it in the pages of the anti-Jones New Yorker), because, he wrote, even if Baraka had been in error, his phony conspiracy theory nevertheless brought attention to past injustices that were real.

Funny how no one is taking that POV regarding Alex Jones.

See, if Alex Jones were black, he wouldn’t be in this mess. Spike Lee, in his 2006 documentary film When the Levees Broke, spread the completely, totally, unquestionably false conspiracy theory that Bush blew up the levees during Hurricane Katrina in order to drown black New Orleans (man, that Bush got around…if he wasn’t planting thermite here, he was planting dynamite there. Not bad for a supposed imbecile). This fabrication is as unfounded as anything Jones has been banned for. Yet Lee was lauded for bringing it up (because, you know, it “makes ya think”). In The Washington Post (a leading pitchfork-wielder in the “deplatform Alex Jones” lynch mob), producer Sam Pollard argued that even though “right now there’s no hard and true facts about the levees being blown up,” we all know that “conspiracies exist” and Spike is only saying that “anything is possible in America,” so it’s cool.

Would the WaPo defend Alex Jones using that same argument? There’s no proof that Sandy Hook was a false flag, but “conspiracies exist” and Jones is only saying that “anything is possible in America.”

Here’s the corker: In 2007, the Teachers College, Columbia University, released a study titled “Teaching The Levees: A Curriculum for Democratic Dialogue and Civic Engagement.” The publication argued that Lee’s conspiracy theory, though unfounded, should nevertheless be taught in schools, because (here we go again) it “makes ya think.”

In 1994, the documentary film The Fire This Time claimed that the 1992 Rodney King riot was a CIA conspiracy. No organic violence, no racial tensions in South Central L.A. The CIA planned and staged the entire thing, and tricked blacks into rioting (for reasons the film never explains). The movie features incoherent inner-city folks mumbling about how “we never had no gangs, no killings, no shootings until the CIA made us do it.” Funny enough, this is exactly the kind of conspiracy theory that Alex Jones himself would likely spout. The CIA staging fake crises, playing Americans against one another. This is the exact same beast as Jones’ false-flag drivel. Equally lacking in evidence, equally ludicrous, but appealing to many people from the perspective of, to again quote the Post, “anything’s possible in America.” The Fire This Time was nominated for best documentary at the Sundance Film Festival. Variety called it a “searing” and “touching” film filled with “invaluable” interviews, declaring that “this important and timely documentary deserves theatrical bookings.” This is the same Variety that last week cheered the deplatforming of Alex Jones for “spewing misinformation and conspiracy theories” about “U.S. government operatives” engaging in false flags.

The poor schmuck. If only he’d spent his career in Rachel Dolezal-style blackface, he’d have his own MSNBC show by now.

Why can’t Alex Jones’ foes say the same thing about him?