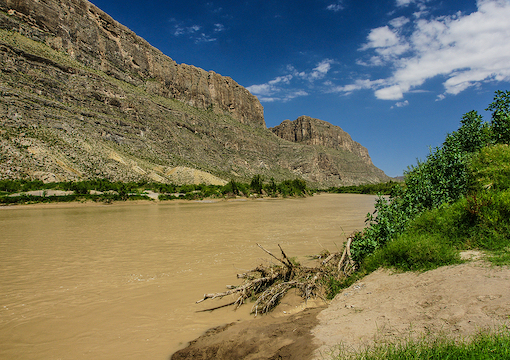 The sudden crossing of the Rio Grande river at Del Rio, Texas, by 15,000 Haitians is a reminder that the most prophetic novel of the last half century was the late Jean Raspail’s 1973 book The Camp of the Saints about a million third-worlders landing on the beaches of France, and whites being unable to summon the will to be so racist as to turn them away.

Do American leaders still believe that they have the moral right to protect the territory of the American people by force? Or will we unilaterally disarm in the Scramble for America?

Of course, the bridle reins held by the mounted patrolman weren’t actually a whip, as the press initially reported, but, still…they were whip-like.

The media meltdown over Border Patrol agents rotating their reins to keep the mob out from under their hooves ranks up there with Jussie Smollett and the Covington kid smirking at the tribal elder for pure idiocy. But it’s also indicative of a massively dangerous ideological trend for the security of the USA.

The Washington Post made its top-center headline on Monday:

How dare law enforcement try to grab migrants! Don’t they know migrants are who we are (except that they are also better than us)?

And the outmoded concept of “law enforcement” needs a rethinking, what with the Racial Reckoning, as the Post explained:

Nor is it possible to ignore the historical echoes suggested by a White officer of the law apprehending a fleeing Black man.

Reports of the mistreatment of Haitian migrants fleeing violence and devastation from natural disasters are deeply troubling, including the inappropriate use of what appear to be whips by Border Patrol officers on horseback to intimidate migrants.

“Obviously, Del Rio is yet another embarrassing screwup by the Biden administration.”

As Chris Cuomo said on CNN:

We really are in the throes in this country of figuring out who we are and what we are about.

And who is more American than Haitian pre-Americans trying to sneak into America?

Also, the border guards were on horseback, which makes them, basically, Cossacks.

And, worst of all, the Border Patrol was impeding migrants who are black. That makes them better than you. As Cuomo said:

To me, it does smack of a bygone era of slavery.

After all, what is more like slavery than blacks trying to slip into the United States while nonblacks try to keep them out?

Seriously, as I’ve been pointing out for many years, the most obvious massive threat in the foreseeable future is that the population of sub-Saharan Africa is exploding at a time when the will to defend the territories of the white world is cratering.

Are sub-Saharans really going to stick around in their own lousy countries, when white people have built themselves much nicer countries?

White-run countries in Europe, North America, and the Antipodes are the best places in the world, so the rest of the world wants to take them away from whites. Wokeism is simply the ideological rationalization of white dispossession.

While Europe has already begun to experience the onrushing onslaught from south of the Sahara, America has mostly been shielded by the Atlantic Ocean. But Haiti, an offshoot of West Africa, provides a small-scale test of what is eventually in store for the U.S. as well.

Haiti is 2,000 miles from Del Rio, and most of the Haitians have taken much longer routes, often through South America. If Haitians can get from Port-au-Prince to Del Rio, how long until a surge of West Africans show up in Camp of the Saints numbers in the U.S.?

In the past, Africans have preferred to go to Northern Europe with its generous welfare states. But now the Biden administration is greatly boosting handouts, so America is becoming ever more attractive.

In 2018, Donald Trump notoriously compared Haiti unfavorably to Norway as a source of potential immigrants, driving the Establishment insane with rage because…well, because it’s obviously true that Norwegians have done a better job of nation-building than have Haitians. After all, that’s the point of all the Democrats who say it’s cruel and unusual punishment to send Haitians back to Haiti. But pointing out the truth is an unforgivable offense in the 21st century.

Why Haiti is so much worse than other Caribbean countries is a long-debated question. One possible answer was suggested by Jared Diamond, author of Guns, Germs, and Steel. Like a more frank Trump, Diamond noted that Haiti’s neighbor on Hispaniola, the Dominican Republic, is a better place to live than Haiti because, in part, the DR imported whiter immigrants:

A second social and political factor is that the Dominican Republic—with its Spanish-speaking population of predominantly European ancestry—was both more receptive and more attractive to European immigrants and investors than was Haiti with its Creole-speaking population composed overwhelmingly of black former slaves…. Hence European immigration and investment were negligible and restricted by the constitution in Haiti after 1804 but eventually became important in the Dominican Republic. Those Dominican immigrants included many middle-class businesspeople and skilled professionals who contributed to the country’s development.

The dominant Dominican dictator of the 20th century, the megalomaniacal mulatto Rafael Trujillo, tried to whiten its population by inviting in European immigrants. During the 1930s, the DR was perhaps the only country in the world to actively recruit Nazi-persecuted German Jews.

In contrast, Haiti carried out a genocide of whites in 1804. And its most important politician of the 20th century, Papa Doc Duvalier (1957–1971), ruled on a black-power platform. He cultivated his resemblance to the voodoo deity Baron Samedi to convince the black masses that he was a sinister sorcerer.

Why the sudden rush to Del Rio? The Mexican government had been holding the Haitians in Chiapas far to the south, but suddenly let them surge north on Sept. 12.

Mexico has not explained why, but apparently it fears Joe Biden less than Donald Trump, whose most impressive foreign policy achievement was enlisting Mexico’s leftist president Andrés Manuel López Obrador in slowing the flow of the rest of the world through Mexico.

Obviously, Del Rio is yet another embarrassing screwup by the Biden administration.

But have some sympathy: Think how hard it is to be a Democratic president in 2021 when millions of your voters have gone nuts over the past eight years and adopted a religion of anti-whiteism. Even if you aren’t as old now and as mentally mediocre as Joe has always been, maneuvering the Democrats’ coalition of the margins without running the ship of state onto the rocks would be a staggering challenge.