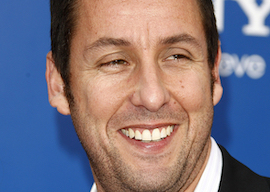 James Holzhauer has won 22 straight games on Jeopardy! Meanwhile, baseball slugger Christian Yelich is leading the National League with 16 homers. What do they have in common besides being young men enjoying vintage 2019s?

For one thing, Holzhauer, a professional sports gambler in Las Vegas, has likely won some money off betting on Yelich, last year’s National League Most Valuable Player.

And for another, both are three-quarters white and one-quarter Japanese.

Yelich, with his black hair, looks ever-so-slightly East Asian. At 6′ 3″, he has his Balkan ancestors’ height, but once you realize his maternal grandfather was Japanese you can kind of see it in his face.

(Or maybe not. If you’d told me Yelich was John Travolta’s sister’s son, I might have believed you.)

On the other hand, Holzhauer, with brown hair, doesn’t look at all nonwhite. (Here’s the only picture I’ve seen of him looking Japanese, and that’s because he’s squinting in the sun.)

Every year, there are more Americans like Yelich and Holzhauer who are three-quarters white and one-quarter East Asian.

They can be particularly hard to notice because 72 percent of white-Asian marriages featured a white husband in the 1990 Census, as I pointed out in my 1997 article “Is Love Colorblind?” Hence, the majority of these quarter-Asians have European surnames, making them even harder to notice.

Other celebrities who are a little East Asian include the Van Halen musician brothers, actors Rob Schneider, Keanu Reeves, and Dean Cain, and political scientist Eric Kauffman, author of Whiteshift: Populism, Immigration, and the Future of White Majorities.

President Bill Clinton announced to applause in 1998 that America’s white majority was doomed to demographic displacement:

This kind of demographic triumphalism has become central to the Democratic Party’s strategy of assembling a coalition of the margins of American life—e.g., blacks, immigrants, Jews, Muslims,
billionaires, transgenders, lesbians, and felons—united only by their resentment of core Americans.

Recently, though, Establishment figures have started to notice that some core Americans resent their inundation. It has therefore become more common to try to walk back this famous forecast, as a recent New York Times headline declared:

Why the Announcement of a Looming White Minority Makes Demographers Nervous

…Mary Waters, a sociologist at Harvard University, remembered being stunned when she saw the research. “It was like, ‘Oh wow, these nerdy projections are scaring the hell out of people,’” she said.

The typical explanation that recently has become the conventional wisdom is instead that the white majority will be around forever because all sorts of people of mixed ancestry will work to avail themselves of that sweet, sweet White Privilege.

“It’s just cooler to be part of a minority than the majority these days.”

After all, in America in 2019, nobody is more immune from criticism and defamation than whites, right? What’s more popular than a little white supremacy?

Seriously, nobody can explain why anybody would rationally identify as a member of the despised majority in 2019, other than if you weren’t paying attention. As the Honolulu preppie who was the last president showed by writing a 150,000-word autobiography entitled Dreams From My Father: A Story of Race and Inheritance devoted to the theme of how he was really, when you stop and think about it, quite authentically black, it’s simply more fashionable to identify with your minority ancestors.

Thus, in the past few years, the national newspapers have devoted an extraordinary amount of op-ed space to young women writers of color, many of them part white, obsessing over how America must change so that their particular looks are considered hotter.

But minoritarianism is not wholly a feminine prerogative. Consider this year’s Super Bowl MVP, Julian Edelman, a good man to have in your foxhole. Edelman is three-quarters gentile and one-quarter Jewish. But, contrary to the rabbinical law about maternal descent, Edelman identifies as Jewish. It’s just cooler to be part of a minority than the majority these days.

This is not to say that the white majority will become a stylish minority the moment they drop below 50 percent. More likely, the needs of the Democratic majority for a unifying Emmanuel Goldstein will keep whites as the hated “legacy majority” for, roughly, ever.

Professor Kaufmann takes a moderate position in the immigration debate, suggesting that the present white majority has the right to resent mass immigration, but also foreseeing that the white majority will live on due to mixed people declaring their allegiance to the white race. Park MacDougald explains in New York magazine that Whiteshift’s

…title refers to Kaufmann’s prediction that over the coming century, Western countries will become majority mixed-race due to migration-driven demographic change, but that these mixed-race majorities will continue to identify with “white” symbols, cultural markers, and myths of ancestry. (Kaufmann, who has an Anglo name and passes as white despite being one-quarter Latino and one-quarter Chinese, offers himself as an example of how such continuity might work in practice.) In the very long term, that is, Kaufmann argues that demographic change will lead to a shift in who gets categorized as white rather than to a permanent “majority-minority” situation.

White supremacy is the normative ideology and dominant ethos of dozens of nations, particularly in Latin America….

For example, in South Asia, the prime minister of Pakistan, cricketer Imran Khan, is a dead ringer for movie star Mark Wahlberg, only taller. And the leader of the opposition Congress Party in India, Rahul Gandhi, is half-Italian and looks it.

Similarly, presidents of Mexico tend to be no more than vanishingly mestizo-looking. The last Mexican president to look significantly Indian might have been Gustavo Diaz Ordaz (1964–1970). Perhaps not coincidentally, he was widely mocked for his ugliness while in office.

Rotmwrt goes on to forecast that white supremacy, ironically,

There’s some evidence for this. For instance, almost no mestizo movie or TV stars have emerged in the U.S. in this century, despite the now-enormous size of that audience. The highest-paid Latina TV star in the U.S. is Sofia Vergara, who looks rather like Melania Trump.

Fellow Taki’s columnist Charles Norman theorizes that the explanation for Adam Sandler’s continued box office success after all these years is that many Mexican-American men identify with Sandler’s Vaguely Ethnic looks. Perhaps they aren’t quite as white-looking as Sandler, but with a little luck with the ladies, their sons or grandsons might look like him.

White entertainment-industry executives intermittently worry that real soon now they’ll finally have to take the advice that got Marlon Brando in so much trouble for offering them in 1994 and start to promote Mexican actors the way they promoted black actors in the 1960s. But they’ve yet to see much demand for that from Latino mass audiences.

In contrast to the immigrant masses, however, something remarkable often occurs to elite immigrants from the whiter and brighter classes of the Third World when they arrive in the United States: They suddenly declare themselves victims of the white supremacy that they participated in at home.

For example, the Spanish-speaking masses in the U.S. worship as a golden god the nearly translucent Univision anchorman Jorge Ramos. But Ramos himself, who looks like the mutant offspring of Anderson Cooper and C-3PO, constantly expresses his rage at white Americans who aren’t sure if unlimited immigration of his brown-skinned fans is really in their interest.

The obvious explanation is that upscale immigrants like Ramos who have gone into the ethnic activism racket in America benefit from importing more of their families’ traditional racial underlings from the old country. It’s utterly apparent that Ramos, for instance, harangues white Americans about white supremacy to intimidate them into granting him higher ratings through higher immigration.

You might think he would be a laughingstock. But he’s not.

Likewise, there’s no evidence of the self-proclaimed leaders of any groups demanding to be legally considered white.

In the first half of the 20th century, that did happen because there really was white privilege back then. For example, in the 1940s, the League of United Latin American Citizens persuaded the Census Bureau that it would be liberal to not include a separate racial or ethnic category for Latinos on the 1950 and 1960 Censuses.

But the introduction of affirmative action in 1969 led to Hispanics demanding that they get their own ethnicity from 1970 onward.

In 1923 a “high caste Aryan, of full Indian blood” asked the Supreme Court to declare him white so he could become a naturalized citizen, but got turned down. South Asians were finally grouped with whites as Caucasians on the 1970s Census.

But Indian immigrant businessmen quickly realized that they were missing out on minority business development preferences that their Oriental rivals were exploiting. So they got themselves grouped with the Orientals in a new Asian category on the 1980 Census and have been making hay off government contracting privileges for nonwhites ever since.

Lately, Arab-American activists have been plotting how to get out of being legally white.

The idea of the white majority expanding to absorb all sorts of mixed people might work, but only if several steps are taken immediately to divert the country from the path it’s on.

First, immigration, illegal and legal, must be sharply curtailed. Both because there won’t be a white majority left to integrate with, and because immigration politics is a huge incentive to work the system corruptly for the benefit of your cousins back home.

Similarly, all the “nation of immigrants” propaganda must be junked. Instead, the Preamble’s statement that America exists for “ourselves and our posterity” must predominate in the minds of Americans.

Next, get rid of affirmative action, at least for everybody who didn’t have ancestors here before the Civil War. It’s insane to grant privileges to the newly arrived.

Then, we need an intellectual revolution so that ethnic activists who demand special privileges for themselves and their kin rather than for American citizens are hooted down as the grifters they are. The comedy industry must be liberated for this purpose.

Finally, Americans must abolish Hate Whiteyism as the KKKrazy Glue that holds together the Democratic coalition. We must legally punish hate hoaxers like Jussie Smollett and shame those who fall for their absurd racist libels.