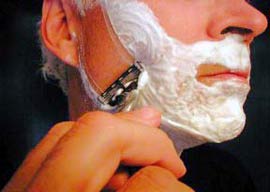 So when will Gillette be rolling out its new line of self-castration razors for men?

Unless you’ve been living under a rock on Venus, you are aware of Gillette’s rampagingly misandrist two-minute video that takes men—OK, white men—to task for rape and bullying and harassment and roughhousing and barbecuing and talking down to female employees and wolf-whistling and calling women “sweetie” and calling each other “sissies.”

As footage of men and boys being assholes unspools, a male announcer scolds the audience:

Is this the best a man can get? Is it? We can’t hide from it. It’s been going on far too long. We can’t laugh it off. But something finally changed. And there will be no going back, because we—we believe in the best in men. To say the right thing, to act the right way. Some already are, in ways big and small. But some is not enough, because the boys watching today will be the men of tomorrow.

According to one count—I didn’t have the stomach to verify—over the course of one minute and forty-eight seconds, 43 males exhibit “undesirable” behavior. Of those 43 males, only one is black and the rest are white. A mere seven males exhibit “desirable” behavior such as preventing other males from committing undesirable behavior by saying things such as “not cool, bro.” Of those seven gallant and valiant men, five are black and only two are white.

If the producers of this “short film” had bothered to check the most recent available government stats regarding race and sexual assault, they’d realize that white women are sixty-four times more likely to be raped by black men than black women are by white men. For emphasis, I’ll note that this isn’t sixty-four percent—it’s sixty-four TIMES.

If one were a paranoid racist—or if one were merely adept at pattern recognition and didn’t mind being called childish names that are meaningless yet meant to disrupt discourse and destroy reputations—one would notice that this Gillette ad depicts a world that doesn’t exist. Not only are the overwhelming majority of men a bunch of clumsy and hairy yet well-meaning doofuses that brutalize neither men nor women but are in fact probably far more fearful of and reverent toward women than women ever deserve, they are largely appalled by the very idea of rape and would likely form torch mobs to run suspected rapists out of town. And they are also acutely aware that they inhabit a modern world where #MeToo means #AllMen, an upside-down bloodthirsty matriarchy where even the most mildly disgruntled female can kneecap a man for life by spreading false or embellished rumors.

“This ‘new era of masculinity’ seems decidedly anti-masculine to me.”

When I see this Fake Pig Patriarchy depicted in this commercial—seriously, when was the last time you saw an ad depicting 100 beefy guys standing in a row with muscular arms folded over barbecue grills chanting “boys will be boys” rather than a half-dozen kale-sipping metrosexuals with man-buns and sandals mainlining one another with black-market estrogen injections?—it makes me wistful rather than ashamed. It makes me look back toward an era where companies such as Gillette praised machismo rather than demonized it.

Thirty years ago, we launched our The Best A Man Can Get tagline….But turn on the news today and it’s easy to believe that men are not at their best. Many find themselves at a crossroads, caught between the past and a new era of masculinity.

Hmm…this “new era of masculinity” seems decidedly anti-masculine to me.

Perhaps it’s Alzheimer’s, but no matter how many times I slap myself upside the head to jog my memory, I still can’t remember a Tampax commercial where women were taken to task for false rape accusations, for being the primary violent abusers of children, for bullying both genders with far more relentless cruelty than boys could ever manage, for using men as ATMs and then discarding them when the cash stream runs dry, or for, according to all the studies I’ve ever seen committing violent acts against men at least as frequently as men hit them.

So far there’s been a substantial backlash to the ad—after all, people don’t cotton to being shamed by anyone to whom they’re forking over hard-earned money—with the natural self-gelded mandarins spewing the same predictable passive-aggressive “if this ad angered you, then you are obviously the problem” bullshit that makes me want to grab a rusty straight razor and shave their entire heads off.

Two of my favorite childhood memories involve my parents endorsing my tendency toward toxic masculinity.

In the first, I was sitting at dinner at around age eight relating how me and the neighborhood boys were tooling around in the woods a few blocks from our house and discovered a sewer pipe that was so large we were able to walk through it. With unabashed enthusiasm, I told mom and dad that when I emerged from the other pipe’s side into the daylight, there was a giant hairy spider crawling on my chest. When my mother attempted to scold me for engaging in such risky behavior, my dad gently explained, “C’mon, honey—this is just what boys do,” and she backed off in the service of a higher cause.

In both cases, I feel that their benevolent indulgence of my wildly boyish ways was much healthier for my development than if they’d brought down the sort of Shame Whip that is relentlessly employed in this Gillette commercial. If you repress natural instincts, you’re just begging for them to reemerge in malignant ways.

There’s even some evidence that the more a father engages in “rough and tumble play” with his young sons, the less aggressive those sons will turn out to be later in life.

It makes a sort of evolutionary sense—the kind that no longer exists in modern advertising—that if you don’t want your men to grow up to be monsters, you should let your boys be boys.