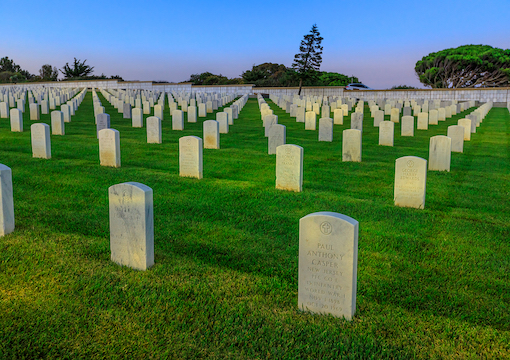 Last Friday, the day after two whites in Georgia were arrested in the vastly publicized killing of the black jogger/prowler Ahmaud Arbery, a young black gunman murdered two octogenarian whites, Paul and Lidia Marino, while they were visiting their son’s grave at a veterans’ cemetery in Delaware. After a six-hour firefight with the police, the shooter, a 29-year-old black man, was dead—whether at police hands or his own remains unknown.

In contrast to Arbery’s killing, this second interracial killing case has gotten virtually zero national media attention through Tuesday morning, even though it’s fairly spectacular in scale and quite curious in motive. For example, an eyewitness speculated that the killer appeared to have brought extra ammunition for his planned shoot-out to the death with the police.

The cops don’t have an explanation for the killer’s actions yet. It wasn’t a robbery. It doesn’t sound like a contract killing. (I can’t rule that out, but I did check if the victims, a retired lithographer and a housewife, were close relatives of any mafioso of the same surname, but found zero connections.) It could be some kind of personal beef, but nobody has found a connection between the killer and the killed at this point.

Imagine that the circumstances were reversed and if on Friday a young white man had hunted down an elderly black couple visiting their son’s grave at a veterans’ cemetery.

“What happens when it’s The Megaphone itself that may have egged on the killer?”

The national media would be in full cry over this racist atrocity. President Trump would attend the funeral. The prestige press would demand that whatever web sources of information and opinion the gunman had followed should be, First Amendment or not, permanently exterminated.

But what happens when it’s The Megaphone itself that may have egged on the killer? For example, a search of the New York Times archives finds 104 articles mentioning the name of Ahmaud Arbery so far just in the month of May. That’s even more saturation coverage than the Times normally devotes to late-breaking developments in the Emmett Till case.

The possibility that the cemetery killer was inspired to shoot some random whites by the enormous media hoopla over the still-ambiguous death of Arbery is not something that the prestige press is rushing to look into. We are never supposed to consider whether The Establishment getting all hyped up over the shooting of blacks by whites (or by nonwhites in the case of Trayvon Martin and Philando Castile) might inspire other blacks to shoot whites.

In contrast, the shooting by a homely white in Georgia of handsome young black criminal Ahmaud Arbery immediately after Arbery chased him down and punched him in the head while grappling for his gun has been promoted into an enormous story by the prestige press, because, after all, when has Black Twitter ever led the media astray? If you can’t trust Black Twitter for a disinterested, objective evaluation of a complex, fast-happening event, who can you trust?

I mean besides in the Trayvon Martin, Michael Brown, and Freddie Gray cases… Sure, the media falling mindlessly for the various Black Lives Matter fiascos was central to the national homicide rate leaping a record 24.8% from 2014 to 2016 and perhaps getting Trump elected president. But it’s racist to know those facts.

It turns out that there is much security video of Arbery, who was arrested for bringing a gun to a high school basketball game and for stealing a TV from Walmart, engaged in what looks like casing the joint for a burglary.

But the subsequent Delaware shooting is of no interest to the press. The concept that some blacks might take seriously press incitements about how they should hate whites simply doesn’t exist. The text string “Black Lives Matter terrorism” has almost never appeared in the news media, even though there have been multiple high-profile assassinations carried out by BLM supporters.

For example, after the death of Eric Garner in Staten Island in 2014, a Black Lives Matter advocate murdered two NYPD officers in retribution for the deaths of Garner and Michael Brown of Ferguson, as the killer explained on Instagram.

The most lurid Black Lives Matter terrorist attack occurred on July 8, 2016, soon after President Obama’s speech from Poland denouncing police bias against blacks following the shootings of Castile and Alton Sterling. Obama cited numerous tendentious statistics to encourage blacks to feel that their problems are the fault of white people, the way Obama always blamed his speeding tickets on racist cops. The ex-president, who is not really a math person, summed up:

Now, these are facts.

Sure, but what fraction of crimes do they commit? The Obama Administration’s own Bureau of Justice Statistics reported in 2011 that from 1980 to 2008, blacks alone made up 52 percent of homicide offenders, despite being only about 13 percent of the population.

This may have been a key turning point in the history of the last decade because it helped propel Donald Trump into the White House by demonstrating that the Democrats were encouraging cop killers.

Since he doesn’t read much, Trump tends to avoid the bizarre intellectual dead ends that verbalists get themselves wedged into. For instance, Hillary Clinton invited the would-be Ferguson cop killer’s mom onto the stage at the Democratic National Convention: an insanely self-defeating ploy, but one that seemed like common sense to Establishment figures such as Hillary who had been reading (and, worse, believing) The New York Times throughout the Great Awokening.

If your Party controls the media, you can have all these unfortunate events memory-holed, so that you never get confronted with tiresome questions about just how much blood you have on your hands in the murders of elders visiting their son’s grave.

But controlling the media means that you also don’t learn from your mistakes.