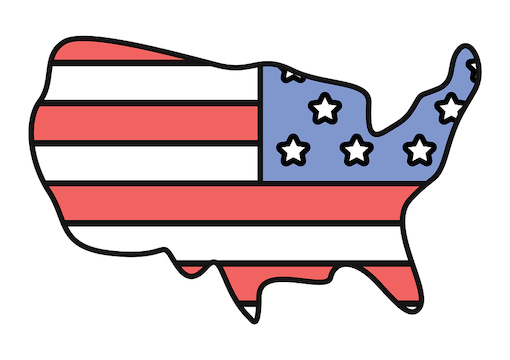 Frank H. Buckley’s highbrow yet quick and lively new book American Secession comes with the foreboding subtitle The Looming Threat of a National Breakup, but the conservative George Mason U. law professor and Trump family adviser is sanguine.

In Buckley’s view, a Trump reelection combined with Ruth Bader Ginsburg’s death might trigger a Calexit movement by aggrieved Californians (a state where Hillary won by 4.3 million votes, while she lost by 1.5 million in the other 49 states) enraged at having to share a country with Trump voters.

Or perhaps the deplorables, offended by the Democrats’ smug “that’s not who we are” rhetoric, will call a new Constitutional Convention (which would require only 34 state legislatures) at which who knows what might happen… The last one, in 1787, tore up the existing Articles of Confederation and invented a federal system.

And would the U.S. breaking into two or more chunks be so bad? Buckley writes:

We’re overly big, one of the biggest countries in the world. Smaller countries are happier and less corrupt. They’re less inclined to throw their weight around militarily, and they’re freer. If there are advantages to bigness, the costs exceed the benefits. Bigness is badness.

Born in Saskatoon, Buckley (no relation to William F.) imports the Canadian assumption that territorial unions, like political parties, come and go. Canada evolved into independence from Britain over a long, mostly peaceful expanse of time. Newfoundland didn’t join Canada until 1949, and the people of Quebec very nearly voted to secede in 1995.

In the U.S., however, the idea of secession has been off the table since roughly the Battle of Gettysburg. Likewise, the same two parties that led the United States into disaster in the Civil War are still utterly dominant here.

But growing bad blood between the two American parties now makes a territorial split-up seem conceivable once again. After all, the United States occupies a huge expanse of longitude and latitude. Perhaps America is just too big these days for 330 million residents to get along?

In his breezy style, Buckley makes the case that a geographic split, such as that of the Czech Republic and Slovakia in 1992, wouldn’t be so bad, before finally recommending as a compromise the kind of super-federalist “home rule” that Britain granted Canada and that Prime Minister Gladstone wished to offer Ireland in the 1880s.

On the other hand, would any kind of regional division actually cure what currently ails America during the Great Awokening?

For instance, perhaps the worst cause of the recent unhappiness explosion in the U.S. since the Obama reelection campaign revived identity politics in 2012 is the much-exacerbated war between the sexes. But how would secession solve the problem of men and women getting on each other’s nerves? Nobody besides Andrea Dworkin ever thought a single-sex country would solve anything.

Similarly, red and blue American states are divided less by race—while California is now only 36.8 percent white, Texas isn’t far behind at just 41.5 percent white—than by white vs. white animus.

And are Americans most irritated by their fellow Americans whom they encounter in real life, or by those they clash with in cyberspace?

And if they divided up into separate geographic countries, would they then cease taunting each other online? I doubt it: The truth is, it’s fun.

Similarly, is the threat of online censorship worse from the U.S. government or from woke multinational corporations?

If America split up, wouldn’t money continue to pour into New York and San Francisco? But then the hinterlanders couldn’t even elect a Trump as revenge upon the coastal elites.

And then there are the practical questions of how to divide up a huge country, ones that Buckley skims over.

For instance, what currency would successor states use? Would it be wise to give up the mighty dollar? But if not, how would the dollar be administered without a political union? The history of the Euro is not encouraging.

Note the hard-earned wisdom of a man who lived through the Eurasian equivalent of what Buckley blithely considers for America:

Above all, we should acknowledge that the collapse of the Soviet Union was a major geopolitical disaster of the century…. Tens of millions of our co-citizens and co-patriots found themselves outside Russian territory. Moreover, the epidemic of disintegration infected Russia itself. —Vladimir Putin

For example, where, exactly, do you draw the border? Buckley’s book only features one map, showing the Republican-Democrat divide in the 2016 election at the county level. But it’s hard to imagine how to draw new national boundaries that would divide leftist urban centers from their own rightist exurbs.

In contrast, Southern secession in 1861 was over slavery, which led to a fairly linear border between the North and the South. The reason was because slavery was profitable at more southern latitudes where white labor was debilitated by tropical fevers. But slavery was unprofitable at more northern latitudes where blacks tended to die of respiratory infections. So, seven deep Southern slave states seceded soon after the election of Abraham Lincoln, four middle-tier slave states followed after Fort Sumter, and four Northern slave states stayed in the Union.

But today’s political divides are largely driven by real estate prices, which are related to population density and the proximity of deepwater coastlines on the Atlantic, Pacific, and Great Lakes.

Inland metropolitan areas such as Dallas and Atlanta can expand 360 degrees into suburbs, so their home prices are lower than in cities on deep water, such as San Francisco, Chicago, and New York, where suburban expansion is severely limited by geography. Thus, family formation is more affordable in inland America, so the traditional family-values party is more popular there.

(A couple of exceptions to this rule: the shores of the Gulf Coast are not densely populated due to the hurricane threat. And inland Denver is turning into a deep blue city because of the high real estate prices imposed by the Rockies just west of the city.)

An obvious problem for secessionists of either extreme is that the blue and red map is complicated, typically being blue in cities and red in their exurbs. For example, in purple Wisconsin, Milwaukee and Madison are highly Democratic, and most of the rest of the state is Republican.

Dividing along partisan lines of geography would create an extremely complicated map with national borders typically drawn a few dozen miles outside of civic centers, inconveniencing surrounding farmers selling their produce in the big cities and urbanites wanting to drive out to the countryside to fish or golf. Millions of commuters would end up in a different country from their current jobs.

Just dividing along state lines would split Coastal America into two or more countries because the conservative Great Plains run from the Mexican border in Texas to the Canadian border in North Dakota.

Moreover, whites tend to become Democrats or Republicans depending upon whether they live in cities or the countryside. So even if Democrats ideologically cleansed Republicans from the rural Northeast and Republicans drove out Democrats from the urban Sunbelt, their descendants who settled conquered enemy territory would start turning into the enemy.

And then there’s the question of what to do with American military assets, such as the U.S. Navy. The divvying up of the old Soviet Black Sea Fleet between Ukraine and Russia has proven enormously contentious. In one example of the kind of ignominious incidents that happen when a superpower breaks up, Ukraine sold an unfinished Soviet aircraft carrier to a shady Chinese businessman who turned it over to the Chinese navy.

Russia confiscated much of the Ukrainian fleet in 2014 when it seized the Crimea peninsula and its main port of Sevastopol.

Five carriers are currently based in Norfolk, Va., one across the James River in Newport News, one in Bremerton on Puget Sound, three in San Diego, and one in Japan.

As of the 2018 election, all 10 of the American-stationed carriers were based in blue states. But I would think that an (ostensibly) Inland America might insist upon, say, taking the Norfolk base and the San Diego base (a Pacific port is a very good thing to own), giving it seven aircraft carriers, while leaving Newport News, Puget Sound, and Japan’s base with their four aircraft carriers to Coastal America.

The notion of splitting up the U.S. along the James River was introduced by the liberal Washington Post columnist Harold Meyerson on the 150th anniversary of Gettysburg in 2013 in his column “Start the Border Fence in Norfolk, VA.”

But this would require breaking the states of Virginia and California into separate countries. San Diego is a little like Sevastopol, a Russian navy town that was not happy being stranded in Ukraine. Similarly, San Diego, an old U.S. Navy town, is traditionally more conservative and nationalistic than the rest of coastal California. But that’s only relatively speaking: San Diego County went heavily for Hillary in 2016.

For red America to extend a land bridge to San Diego would make it a serious two-ocean country. But it would have two downsides.

First, red America would take on an even larger border with Mexico, while insulating blue America from Latin American immigration.

Second, Californians might object violently to this intrusion into their state. And this could lead to war, just as the breakup of the Soviet Union has led to fighting in Russian Chechnya, Transnistria, Nagorno-Karabakh, Georgia, and Ukraine.

Buckley argues that it’s not 1861 anymore. We are now a more aged and comfortable society, so nobody would rush to war. Buckley writes:

Finally, there’s the president. I don’t think we’d see one who’d want to send in the Army to invade a state. Were he of the other party, he might even look at the electoral map and say, “Erring sister, depart in peace.”

For example, Tory prime minister David Cameron granted Scotland an independence referendum in 2014, figuring that if Scotland left it would take many anti-Tory votes with it.

Further, many red Americans think they would win in a fight. As Dave Barry wrote in 1985:

The South has 96 percent of the nation’s armed pickup trucks, whereas the North mainly has Fitness Centers, so it would be over in minutes.

In truth, however, the likely answer to the question of “Who would be willing to fight?” is the military servicemen who signed up to fight for the USA.

So which side would the U.S. military tend to support in a battle of secessionism vs. nationalism? My impression is that the U.S. military very much enjoys representing the strongest, most ass-kicking country on earth and intends to keep the USA that way.

So, if the politicians can’t agree on an amicable Czech-Slovak-style split-up, and the obvious controversies over who gets, say, the port of San Diego suggest that they won’t, then the effective decision would wind up in the hands of the hard men of the military.

And my guess is, military men like things just the way they are and have no intention of weakening America on the world stage by allowing petty politicians to split up the most awe-inspiring military in human history.

Any appeal to arms puts the final decision in the hands of the warriors. And they are nationalists who value, above all, the unity of the nation.

So, secession is not going to happen.