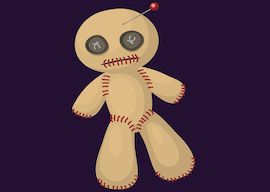 The prestige of the intersectional is pushing respectable opinion in anti-science directions, as seen in the resurgent prestige of astrology and witchcraft. Granted, perhaps it doesn’t matter all that much what lowbrows who like horoscopes and spells are into, but it probably does matter that actual sciences such as genetics, which had been the glamour field of the new century, are starting to be castigated by the prestige press as deplorable “race science.”

Until recently, the digital age had, on the whole, been a downer for enthusiasts of the paranormal. Equipping everybody at all times with pocket cameraphones has not resulted in an abundance of credible photos of UFOs or the Loch Ness monster. And enabling people to argue ad infinitum on the internet tended, on the whole, to give skeptics an upper hand.

But recently, we’ve been besieged by announcements that witches and star charts are back, bigger than ever. As usual, it has something to do with Donald Trump and/or Brett Kavanaugh. For example, a recent New York Times article entitled “The Witch Continues to Enchant as a Feminist Symbol” concluded:

…the president began to tweet “witch hunt” whenever he felt picked on by Robert Mueller. The moral outrage implicit in this cry depends on the fact that witches do not exist. Oh, comes the collective response from multitudes of women, persecuted yet powerful, but they do.

“We ‘refuse to be silent any longer’: magic as self-care after Kavanaugh.”

Both witchcraft and astrology of course primarily appeal to women. And women are, by nature, blessed with more intersectionality than men are. So you must trust the women.

It’s really not much more complex than that.

My vague impression is that witchcraft and astrology generally target different types of women. The idea of being a witch tends to attract the lonely, bitter, and vengeful.

Astrology addicts, in contrast, tend to be upbeat ditzes, people persons with positive outlooks who look forward to the stars bringing them unexpected journeys and handsome strangers.

Horoscopes were huge in the 1970s. It was a dumb decade, but not a lonesome one. Tom Wolfe discerned a “happiness explosion.” Astrology handed the two sexes a vocabulary they could employ to flirt. All the guys had to do to get the ball rolling was memorize a little gibberish. Countless ’70s comedies featured black guys in Shaft-style leather coats hitting on pretty girls with Afros by asking them their signs.

“We are entering an era when feelings are prioritized over logic, which isn’t doing much good for how people feel.”

So astrology has mostly been a relatively harmless rationalization for people doing whatever they want to do anyway. Today, however, when even Cosmo has gotten woke, we now have a social justice astrologer, Chani Nicholas.

In contrast to the 1970s, the 2010s are an unsociable decade. Social media doesn’t seem to make people happy. Rising rents make it harder for the young to afford their own place. Young people are having less sex than previous generations.

Whether today’s nasty callout ideologies are the cause or effect of the current Unhappiness Explosion is arguable. But it’s clear that we are entering an era when feelings are prioritized over logic, which isn’t doing much good for how people feel.

The current witchcraft fad is extremely Eurocentric, perhaps tracing to the Harry Potter books, although there is some interest in African rituals: “Young black women are leaving Christianity and embracing African witchcraft in digital covens,” enthuses The Atlantic.

Yet the African conception of hexing, which is assumed to happen even without conscious intent, simply due to bad thoughts transmitting their malevolent effects across vast distances, is perhaps less influential on hobbies than on fashionable highbrow concepts such as implicit bias and white privilege. African witch doctors teach that you don’t have to use a newt’s tail to put a hex on somebody. Just thinking poorly of him may cause him to suffer mysterious problems, much as systemic racism and stereotype threat are said to work.

Conversely, real science is increasingly castigated. For example, Sen. Elizabeth Warren’s DNA-test fiasco has caused both The New York Times and The Washington Post to write disapprovingly of DNA analysis as “race science.” The New York Times has harrumphed that Warren’s pre-campaign problems may be due to her “mistaken embrace of the controversial field of racial science.” The Times warned:

Ms. Warren’s allies also say she unintentionally made a bigger mistake in treading too far into the fraught area of racial science…

Yet, Senator Warren had her genome analyzed by a “world expert” Stanford geneticist, Carlos Bustamante.

On the other hand, consumer DNA testing has grown immensely in popularity. Razib Khan estimates that by this Christmas as many as 25 million people will have purchased DNA test kits, up from 2.5 million just three years ago.

Until very recently, the press never seemed to notice that commercial DNA testing is largely about race.

Personally, I’ve been pointing out for years that it doesn’t make any sense to believe the dogma that science has proved race is just a social construct with no biological reality if you also accept that, say, 23andMe can measure its founder Anne Wojcicki’s DNA as 50 percent Ashkenazi and 50 percent gentile European. But few others seemed to notice the contradiction.

But now that Senator Warren has embarrassed herself, the wolves of political correctness are circling population genetics.

The New York Times has started to run articles about how DNA scans oppress black women, such as “Sigrid Johnson Was Black. A DNA Test Said She Wasn’t” and “The Family History DNA Can’t Reveal,” which puzzles over how “people still believe in DNA” when it can’t reveal how bravely your ancestors fought racism or how racist Trump is.

The progressive stack is basically a measure of how much you aren’t like, say, James Watt, the developer of the modern steam engine, the key invention of the Industrial Revolution. Watt was white, male, Protestant, straight, rich, mechanically skilled, and a scientific genius, so you’d better not be.

Nobody agrees on exactly how the pyramid of intersectionality is layered, but everybody assumes that black women are higher up than most. So as intersectionality becomes the measure of man, we are more and more being lectured by black women. They tend to have various strengths, but on the whole they aren’t terribly scientific-minded, and thus the conventional wisdom is becoming more based on emotions and attitude and less on empirical reality.

In truth, the reason that Warren’s DNA test, in which she was found to be somewhere from 63/64 to 1023/1024 white, was such a disaster for her is because America’s racial preferences work on the honor system. You just check whichever box you claim to be.

Brazilians find it absurd that white Americans don’t try to take advantage of such a lax setup, but here it’s quite rare for whites to violate the honor code by claiming to be a different race. Therefore, it’s shocking to her fellow white Americans that the presidential contender claimed to be Native American at Penn and Harvard.

Nobody knows what the precise racial dividing line for eligibility for diversity benefits is supposed to be, but everybody knows that Warren falls on the white side of it, whether measured by DNA, looks, upbringing, or tribal affiliation.

But to understand why Warren claiming to be a Native American for her law school jobs has proved such a problem for her would require realizing that white people, the designated bad guys of modern life, tend to behave quite admirably when it comes to race quotas. Such a minimal number of whites cheat that I can’t recall Jesse Jackson or Al Sharpton ever complaining about it.

But this reality of white innocence is hard for most in the media to conceive of these days, as the zeitgeist obsesses over white sins, real and imagined.