The Epidemic of Police Violence Against Blacks: A Persistent Myth 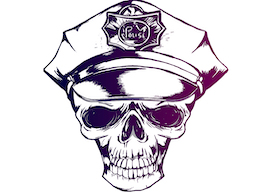 The mainstream media embarrassed itself again last week by propagating another hate hoax. A 12-year-old black girl in the D.C. suburbs claimed that three white boys in her class held her down on the school playground, called her hair “nappy,” and cut off some of her dreadlocks. In response, many bored and boring people, from New York to Oregon, diverted themselves for a little while by chattering righteously about white racism. Steve Sailer captures the striking implausibility of the girl’s claim in his current column. “After all,” he observes, “few white males younger than 79-year-old Don Imus use the word ‘nappy.’” And besides, he asks, “do roving gangs of male juveniles actually carry scissors for impromptu hairstyling?”

And yet there is nothing surprising about this farce. The young naturally imitate both the virtues and the vices of adults. And thanks to many pernicious influences—educational institutions, the media, Hollywood, Democrat politicians, black intellectuals (a largely left-wing group)—black children readily learn to perceive life for blacks in America as so much racism and oppression. Or, if they don’t actually believe that, black children may nevertheless endeavor to present themselves as victims. For children, like adults, may gain certain benefits from appearing to embody what Bertrand Russell, in an insightful essay, called “the superior virtue of the oppressed.”

On various measures, blacks are not doing as well as other groups in this country. The main reason for this, as I noted in my last column, is the large amount of dysfunction that besets them, something only they themselves can change. Now this, of course, is a politically incorrect subject. Apparently, blacks are supposed to be treated like children: They don’t actually possess moral agency; having grown up in poverty, they know not what they do; they aren’t to be held accountable, because they’re just products of their environments, of the racist policies implemented by whites. At the same time, blacks merit a special type of reverence, heroically fighting as they do against “the system.”

There is something of Rousseau’s sentimental idea of the noble savage in this strange romanticizing of blacks, and it’s telling that the vast majority of the people who do it are white liberals who have had very little (if any) direct contact with working-class blacks. In other words, their romanticizing is a delusion that is hardly possible for the many working-class whites who have seen conscious black dysfunction, just as they have seen conscious white dysfunction. But while blacks are treated like children or noble savages, in the current ideological climate, anybody who, like Amy Wax and Larry Alexander, points out that the main thing holding blacks back is their own behavior (or disproportionate lack of good habits) is sure to be attacked as a racist.

“To be sure, unjust police violence against blacks does exist, but it’s no epidemic.”

Moreover, many a conservative, too, is quick to obscure the issue of black agency, for rather than addressing this important subject, he prefers to wave his partisan pom-poms: Black problems, he insists, are due to bad Democrat policies. Democrats want to keep blacks on the “slave plantation” that is the welfare state. Black women have higher rates of abortion than other groups, and this “culture of death” is “just what Democrats want.” And so on and so forth. Content to score his petty political points against the opposition, this blinkered dullard never bothers to explain why such bad policies are not causal in regard to other groups. Meanwhile, blacks remain in a bad way; and young black men in inner cities, a danger to the rest of us.

Yet the most insidious myth, when it comes to black cultural dysfunction, is the view that there is an epidemic of police violence against blacks, because it is this, more than anything else, that keeps broken windows theory policing from being practiced in black neighborhoods, where the very effective method is much needed, given the high amounts of crime, especially violent crime, that plague such neighborhoods. On Sept. 19, the House Judiciary Committee, which is controlled by Democrats, held a four-hour hearing to address a “series of deaths of unarmed African-American men while in police custody” and the “mistrust between police and marginalized communities.” This event was a sham. Committee chairman Jerry Nadler began it by asserting that the “frequency of these killings and the absence of full accountability for those responsible send a message to members of the African-American community that Black Lives Do Not Matter.” Just before that, Al Sharpton, America’s race-hustler-in-chief, had led Gwen Carr, the mother of Eric Garner, to the witness table. There, she would lament the fact that after five years of federal and local investigation, the officer who used a chokehold on her son was fired, but no prosecutions or other actions in the case have occurred. In truth, that officer was fired in a predictable act of spineless yielding to public pressure, done in order to keep up politically correct appearances. Like Michael Brown and Freddie Gray, Eric Garner was a thug who broke the law but resisted arrest, and the chain of events that resulted in the deaths of these men needs to be understood in context.

The myth of a police-violence epidemic against blacks requires us to ignore common sense. All Americans know, from their own experiences, that the common phrase “bad neighborhood,” where “bad” signifies dangerous, really means a black neighborhood. We never hear about police violence against Asians, but then, Asians are very low in rates of violent crimes. So are Jews. On the other hand, we do hear about Jews getting in trouble for white-collar crimes, because in white-collar areas—Wall Street, for example—Jews tend to be overrepresented. To be sure, unjust police violence against blacks does exist, but it’s no epidemic. The trouble is that people are largely innumerate concerning the issue, although intellectuals, journalists, and politicians have an obligation to get informed.

Nor is there any dearth of good scholarship here. In a study published in August in the Proceedings of the National Academy of Sciences, Johnson et al. found “no evidence of anti-Black or anti-Hispanic disparities across shootings, and White officers are not more likely to shoot minority civilians than non-White officers. Instead, race-specific crime strongly predicts civilian race.” This is consistent with a 2017 paper by Harvard economist Roland Fryer, which found no evidence of racial discrimination in police shootings of blacks or other minorities. In general, police violence against citizens reflects racial differences in crime rates. Once we adjust for these differences, the idea that there is an epidemic of police violence against blacks or minorities proves untenable. Heather Mac Donald, an indispensable journalist, writes:

In fact, however, talk about blacks per se is a bit misleading: The most relevant group, massively overrepresented in violent crimes, is black men under 40, who constitute only about 4 percent of the population.

Again, common sense informs us that black neighborhoods are unusually dangerous places. It stands to reason, then, that in such places there’d be more police violence than in, say, some white suburb. Still, in an age of mass man, mass government, and mass media, we must expect the false and the insipid, the most turgid, lumbering stupidity to prevail over truths we can all see with our own eyes. Thus, Pramila Jayapal, Representative of Washington, declared at the hearing:

But, granting the truism that blacks used to be treated terribly in America, dwelling on this subject tells us nothing at all about how to move forward now. On the contrary, it’s a positive hindrance. Neither is it desirable to use vague, unsubstantiated concepts like “structural bias” to account for unequal outcomes among racial groups. Just how little serious this is, is betrayed by the fact that it’s only ever done in regard to blacks and Hispanics. For example, whites have lower mean incomes than Asians and Jews, two groups who also outperform whites academically, on average. But of course, nobody ever sees any “structural bias” in all this.

[W]hat we could call behavioral poverty helps explain how some individuals spend their lives mired in poverty and social dysfunction. Behavioral poverty is reflected in the attitudes, values, and beliefs that justify entitlement thinking, the spurning of personal responsibility, and the rejection of traditional social mechanisms of advancement. It is characterized by high self-indulgence, low self-regulation, exploitation of others, and limited motivation and effort. It can be correlated with a range of antisocial, immoral, and imprudent behaviors, including substance abuse, gambling, insolvency, poor health habits, and crime.

Many thinkers and activists on the left, however, prefer to disconnect an individual’s behavior from his lot in life—whether it’s by obscuring the violence committed by criminals or blaming it on external forces, downplaying the aggression of problem students in public schools when they’re minorities and talking instead about the “school-to-prison pipeline,” or suggesting that the vagaries of chance explain individual success and failure. In this way of thinking, implicit bias is invariably to blame for police conflicts with minority communities, rather than uncooperative or violent arrestees, and the “prison-industrial complex,” not chronic felonious behavior, explains why 2 million Americans are behind bars. From the Left’s point of view, bad behavior, at least by certain favored groups, should be ignored, or, if not ignored, then explained away by diabolical social forces—poverty, in particular—that cause the bad behavior. This harms society and does nothing to help the people whom the Left claims to want to help, especially since its explanation is backward: poverty is far more often the outcome of bad behavior, not the cause of it.

“Behavioral poverty” is a way of describing a character problem. If there’s one thing no conservative should dispute, it’s that character is fate, as the ancients said. Regardless of the language we use, what’s important are the choices people make, and the things they value. I do not know why it is that there is so much cultural dysfunction among blacks—to attribute it to the welfare state, as many conservatives do, begs the question as to why that welfare state is not causal when it comes to other groups. Nor do I see how the treatment of blacks under slavery or Jim Crow can explain, for instance, the 70 percent black illegitimacy rate, or black “behavioral poverty” generally.

Anyway, so long as there is such poverty, the myth of a police violence epidemic against blacks is likely to persist. Certainly leftists and Democrats are not going to stop disseminating it. Conservatives, then, should drop the mindless partisanship, and focus on the need for better choices and lifestyles. In other words, stop effectively pardoning black misbehavior by pointing fingers at Democrats, and be actual conservatives.