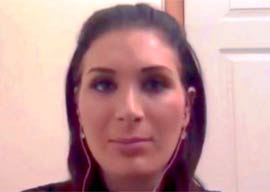 The Week’s Most Curious, Furious, and Spurious Headlines

LAURA LOOMER CRIES SO HARD ABOUT HER SOCIAL-MEDIA BAN, HER NEW NOSE ALMOST FALLS OFF
Whiny Alt-Lite yenta Laura Loomer—best known for staging a hoax about her tires being slashed, interrupting theatrical events in classic SJW style, enthusing about her upcoming nose job on Instagram, and gleefully trying to dox and deplatform people to the right of her—was recently divested of her Facebook and Instagram accounts in a purge that also included the hilarious Louis Farrakhan.

Because she has no ideology of her own and is essentially a howling windbag of attention-seeking, she recently appeared on The Alex Jones Show to cry foul and claim what a hard fighter she is, even though hard fighters don’t traditionally throw tantrums and burst into tears because they can’t access Facebook anymore:

My life is ruined! Does anybody understand how ruined my life is?! I’m sick of it! I don’t want to listen to people tell me that I’m a conspiracy theorist.  They don’t know what it’s like to be me! And I’m sick of it. I’m fighting harder than most conservatives. I’m fighting harder than anybody and I’m being destroyed and they mock me. These people don’t understand like my life is unlivable at this point in time.  Like what is the point?

The point is that we get to see you losing your mind in real time, you shallow, shrill, two-faced, two-nosed harpy.

FARRAKHAN BLAMES “SATANIC JEWS” FOR HIS SOCIAL-MEDIA BAN
In stark contrast to Laura Loomer—it’s almost like the difference between black and white—the Right Honorable Spectacular Glimmering Louis Farrakhan did not stomp and wail like a diaper-pooping infant about his social-media ban.

Rather, he did what he always does—he blamed the Jews.

Speaking on Thursday night at St. Sabina’s Catholic Church in Chicago, Farrakhan was careful to distinguish between good ol’ bagel-butterin’ regular Jews and the Satanic ones:

I’m here to separate the good Jews from the Satanic Jews….I have not said one word of hate. I do not hate Jewish people. Not one that is with me has ever committed a crime against the Jewish people, black people, white people. As long as you don’t attack us, we won’t bother you.

We don’t view these comments as anti-Semitic as much as they’re anti-Satanic, and nobody ever complains about all the anti-Satanism that runs rampant in this culture.

MAN CHOPS OFF HIS GENITALS, SAYS HE FEELS HAPPIER, HAS BETTER ORGASMS
In the wild, wacky, whimsical, whirlwind world that is gender confusion, it gets harder and harder to keep up with all the new terms these freaks keep inventing. We’d be happier—and we presume they would, too—if they merely accepted that there are two genders and stopped hacking at their genitals.

“Why does it never occur to these people to cut off their own heads?”

For example, we bet you don’t know what a “nullo” is, do you? If you don’t, that works in your favor. But a “nullo”—AKA a “smoothie”—is someone who feels so intensely asexual that they feel the need to remove their genitals and sometimes even their nipples so that no evidence remains that they were actually born to procreate just like everyone else.

Trent Gates is a 23-year-old man from Washington, DC, who in 2017 hacked off his penis and testicles in two bursts of insanity over a 16-hour period. He says he used a ceramic blade rather than a steel one because it involves “less ripping and tearing.”

He says that he inserted a catheter into the newly carved gashes in his crotch to help himself urinate for weeks after the self-performed castrations. He also claims that he feels “happier” and “freer in a sense” now that he’s no longer burdened by his meat and two veggies. He also, apparently without being asked, offered that sex with his boyfriend is now more “intense” and that his first orgasm after the operation was so powerful that it left him “shaking for hours.”

Why does it never occur to these people to cut off their own heads?

HUNTING ALBINOS IN MALAWI
Africa is an intensely amazing and colorful place where people often live to be 30 and car thieves transform into goats.

It’s also a very spiritual place as evidenced by the fact that its inhabitants are the most intensely religious in the world. Because they are wise and deep and intuitive, they realize things that effete capitalist Westerners—with their Waterpiks and garbage disposals—are unable to see, like the fact that body parts from dead albinos can bring you good luck.

The wonderful country of Malawi—where the nominal per-capita GDP is less than a dollar a day and one in every ten adults is HIV-positive—has seen the murder of 25 albinos since its last election in 2014. To help make the nation’s albinos feel more secure, the country has supplied 1,600 of them with electronic alarms that notify local police stations in the event that anyone should start killing them.

We wish Malawi’s albinos good luck and hope that they don’t mistake the alarms for food and eat them.

POLL: DANISH WOMEN WOULD RATHER BE WOLF-WHISTLED THAN CALLED A FEMINIST
A recent YouGov/Cambridge Globalism Project poll of people in 23 countries revealed that Denmark just might be the world’s “least feminist nation”:

• A mere one in six Danes considers themselves to be a feminist; this includes only one in four Danish dames.

• A scant 4% of Danish men and a half-as-scant 8% of Danish women have a “very favorable” view of the #MeToo movement and its encouragement of women to bask in their victimization, whether real or imagined.

• A third of Danish women say they are happier being wolf-whistled than they are being called a feminist, a higher quotient than women in any other country than Nigeria.

STUDY: UNIVERSAL BASIC INCOME DOESN’T WORK
Since automation will prove to be the death of the working class and there is no way around this fact unless we decided to blow up everything and go full Luddite, many have proposed that the only way to keep the lumpenproles from rioting is to throw free money at them—what is known as “universal basic income” or UBI.

A recent study from the New Economics Foundation says that UBI doesn’t work:

There is no evidence that any version of UBI can be affordable, inclusive, sufficient and sustainable at the same time….the money needed to pay for an adequate UBI scheme would be better spent on reforming social protection systems, and building more and better quality public services.

We always knew the Yang Gang was retarded.

TENNESSEE JUDGE REPRIMANDED FOR QUOTING TAKI’S MAG WRITER
Jim Lammey is a Tennessee judge who works at a criminal court. We’re not sure why his job requires him to love Jews, because as far as we know, if there are Jews in a courtroom, they are there as lawyers and not as criminal defendants.

It was recently made public that on Facebook, Lammey linked to an article by Taki’s Mag columnist David Cole that suggested certain West-antagonizing Jews should “get the fuck over the Holocaust.”

Lammey has been censured and derided and reprimanded by the apparent six million or so Jewish-identity organizations in Tennessee. In his defense, Lammey said he’s not a racist because he has Jewish and black friends.

It does bring up an interesting question, though: Would there be more or less anti-Jewish sentiment in the West if Jews were to drop the idea that their suffering is uniquely untouchable? Until next week, chew on that question.