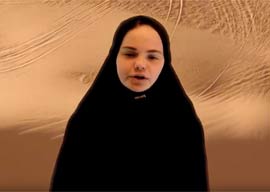 The Week’s Most Global, Immobile, and Ignoble Headlines

YOUTUBE’S 14-YEAR-OLD GIRL COMEDIC GENIUS TAUNTS YOUTUBE EXEC
If BuzzFeed’s supremely wormy Joseph Bernstein has a problem with you, then you are clearly talented and are doing something right.

As the astronomically banal website’s chief witch hunter, Bernstein spends his days getting offended and his nights attempting to destroy the lives of those who’ve offended him. In the past he’s attempted to expose the identity of cartoonist A. Wyatt Mann and successfully got comedian Sam Hyde fired from a lucrative, high-profile job at the Cartoon Network.

Bernstein’s latest target for extermination—although at present, his attempts seem to be backfiring—is 14-year-old Sarah Connor, a high-school freshman from the Bay Area whose YouTube handle is “Soph.”

In typical pearl-clutching, smelling-salt-sniffing fashion, Bernstein’s hit piece on Soph describes her shtick as a “mix of hatred toward Muslims, anti-black racism, Byzantine fearmongering about pedophilia, tissue-thin incel evolutionary psychology, and reflexive misanthropy.” We will assume that Soph has never said anything untoward about Jews, because if anyone in the world would have made a big screaming stink about it, Bernstein would be the guy.

He quotes a passage from a recent video Soph made called “Be Not Afraid”:

I’ve become a devout follower of the Prophet Muhammad. Suffice to say, I’ve been having a fuck ton of fun. Of course, I get raped by my 40-year-old husband every so often and I have to worship a black cube to indirectly please an ancient Canaanite god — but at least I get to go to San Fran and stone the shit out of some gays, and the cops can’t do anything about it because California is a crypto-caliphate.

Bernstein also quotes from a video Soph made where she threatens YouTube CEO Susan Wojcicki:

Susan, I’ve known your address since last summer. I’ve got a Luger and a mitochondrial disease. I don’t care if I live. Why should I care if you live or your children? I just called an Uber. You’ve got about seven minutes to draft up a will….I’m coming for you, and it ain’t gonna be pretty.

At the time Bernstein’s article appeared, Soph had slightly over 800,000 followers on YouTube. As this is being typed, she has 959,000 followers.

WILL PC BE THE DEATH OF ENTERTAINMENT?
As the sage Ted Kaczynski noted in his magnum opus, although leftists posture as being motivated by compassion, hostility and the insatiable drive for control are too prominent in their behavior for this to be true. Although they speak out of one side of their mouths about tolerance, with the other side they attempt to shout down and destroy anyone who deviates even one micron from their orthodoxy.

We’ve previously written about how the Kulturkampf vultures have aggressively sought to erase the memory of American icons such as John Wayne and Kate Smith. In 2017, a Memphis theater canceled a screening of Gone With the Wind—which, when adjusted for inflation, is still the highest-grossing film of all time—because the new Wrongthink Czars have adjudged it as “insensitive.”

“Diversity is our greatest strength—unless you’re an American-born worker.”

But now it’s getting to the point where the work in question need not be the tiniest bit “insensitive” so long as its creator has done something insensitive in the past. After Bill Cosby was convicted of rape, Bounce TV canceled all reruns of The Cosby Show, a show so wholesome that it makes angels vomit. Netflix refused to air Woody Allen’s most recent film due to ancient and unproved sexual-assault allegations against him. And after comedian Louis CK admitted to masturbating in front of women who hadn’t specifically requested him to do so, HBO axed all of his content.

In the future, we predict that there will be only one TV station on Earth, and its programming will consist of a Simon Wiesenthal hologram saying “Nazis are bad” forever and ever.

STUDY: FOREIGN-BORN US WORKERS DRIVE DOWN WAGES FOR NATIVE-BORN WORKERS (DUH!)
Diversity is our greatest strength—unless you’re an American-born worker.

• Nearly half of foreign-born American workers are Hispanic and a quarter are Asian.

• Part of their attractiveness to employers is the fact that foreign-born workers will accept an average weekly income only 83% that of American-born workers.

• Nearly half a trillion dollars yearly are redistributed from middle-class and working-class Americans to large employers and freshly arrived immigrants.

We have been saying this for years and will keep screaming it until you go deaf—all this noise about “racism” is merely a form of psychological conditioning to scare people from daring to speak about the fact that they are being economically displaced.

GERMAN COURT GREENLIGHTS “NAZI” PARTY ADVERTISEMENT
Have you noticed that there are currently more “Nazis” in the world than there were in the 1930s? This is because any European who dares to notice that Europeans are being systematically replaced and demeaned is smeared as a “Nazi.”

Because German’s National Democratic Party (NPD) believes that Germany should have a political party that serves the interests of Germans—a radically extreme idea, we know—Reuters feels obligated to call it a “neo-Nazi party.”

But to its credit, Germany’s top court recently rejected an attempt to block a political ad for the NPD from Germany’s airwaves. In the ad, a narrator intones:

Since the arbitrary opening of the border in 2015 and the uncontrolled mass migration that followed, Germans have become almost daily victims.

FEMALE-TO-MALE TRANNY MISDIAGNOSED BY HOSPITAL WORKERS AS OBESE, THEN OUT POPS A STILLBORN BABY FROM “HIS” VAGINA
What has the world come to when hospital workers actually believe that a pregnant female-to-male tranny who’s complaining of abdominal pain is nothing more than a fat male with digestive issues?

The New England Journal of Medicine reports of an unidentified “pregnant transgender man” who showed up at an unnamed hospital, only for a nurse to misdiagnose “his” problem as intestinal rather than vaginal.

The fat “man” in question was actually a pregnant woman who’d been polluting her bloodstream with testosterone, yet she still remained so resolutely female that she became pregnant. Shortly after the misdiagnosis, out plopped a stillborn infant from the “man’s” vagina.

It’s uncertain whether the fetus was already dead when this sad, sad lady went to the hospital, but if not, the Transgender Delusion just killed a baby.

REPORT: OHIO STATE UNIVERSITY PHYSICIAN SEXUALLY ABUSED AT LEAST 177 MALE STUDENTS
In 2005, former Ohio State University athletic physician Dr. Richard Strauss committed suicide, so he cannot be tried for serial molestation and then sent to prison where he would’ve had every last tooth knocked out of his mouth.

Strauss worked for USU between 1978 and 1998. Only a year after he started, rumors emerged that he was overly friendly during his physical exams of male students to the point where his unsolicited sexual overtures became an “open secret.” Even though two other students had made allegations against Strauss in 1995, it wasn’t until the next year when “Student C” filed a formal complaint about Strauss’s behavior during an exam for a urinary tract infection that the school finally squeezed him out. According to CNN:

Student C reported that during the appointment, Strauss began pressing, caressing, and fondling his genitals. Despite Student C telling Strauss he felt uncomfortable, Strauss told him it was a necessary part of the exam.

Strauss continued to fondle him, until Student C experienced an erection and subsequent ejaculation. Student C said he grew increasingly upset about what happened and told Strauss he should not have done that. Student C says Strauss responded by saying “it didn’t seem like it was wrong” and that “it seemed like (C) kind of enjoyed it,” according to the report.

According to an independent report from the law firm Perkins Coie, Strauss abused “at least 177 male student-patients” and was often spotted loitering around locker rooms and showers.

If you ask us, dude sounds like he was a wee bit of a weirdo.