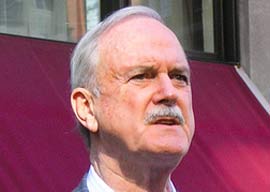 Chief among the British comedian’s critics is London Mayor Sadiq Khan, who, although London-born, carries not a drop of Anglo blood in his entire 5’5” swarthy body—which is a full foot shorter than Cleese is.

Cleese, who abandoned his ancestral homeland last year to live in the Caribbean island of Nevis, took to Twitter to proclaim:

Since then, virtually all my friends from abroad have confirmed my observation

So there must be some truth in it…

Cleese was referring to a 2011 interview in which he stated:

I’m not sure what’s going on in Britain. Or, let me say this – I don’t know what’s going on in London, because London is no longer an English city.
That’s how we got the Olympics.
They said we were the most cosmopolitan city on Earth. But it doesn’t feel English. I had a Californian friend come over two months ago, walk down the King’s Road and say, “Where are all the English people?” I mean, I love having different cultures around. But when the parent culture kind of dissipates, you’re left thinking, “Well, what’s going on?”

What’s going on, Mr. Cleese, is that you’re being replaced, but unlike the average working-class London yobbo, you had the wherewithal to flee the country before being eaten alive.

After being smeared and bullied and demeaned and dehumanized and called a “racist” at least 10,000 times, Cleese refused to apologize:

I suspect I should apologise for my affection for the Englishness of my upbringing, but in some ways I found it calmer, more polite, more humorous, less tabloid, and less money-oriented than the one that is replacing it

Facing ever more scorn, Cleese quadrupled down and revealed a set of balls the size of Stonehenge’s rock slabs by dredging up the specter of female genital mutilation:

I think it’s legitimate to prefer one culture to another

For example, I prefer cultures that do not tolerate female genital mutilation.

Will this be considered racist by all those who hover, eagerly hoping that someone will offend them – on someone else’s behalf, naturally

Bless you, Mr. Cleese. Except for Peter Cook, you were the most brilliant British comic of the past couple generations.

MERYL STREEP SAYS THE TERM “TOXIC MASCULINITY” IGNORES THE FACT THAT “WOMEN CAN BE PRETTY FUCKING TOXIC”
Despite the fact that she has a face that looks like a garden shovel and suffers an incurable case of Trump Derangement Syndrome, actress Meryl Streep recently redeemed herself just a tad by rightly observing that the term “toxic masculinity” is demeaning toward males. During a recent interview, she showed an empathy for maleness that is all but extinct in modern Hollywood:

Sometimes I think we’re hurt. We hurt our boys by calling something toxic masculinity. I do. And I don’t find [that] putting those two words together…because women can be pretty fucking toxic. It’s toxic people. We have our good angles and we have our bad ones.

“It’s odd to live in a world where the mere act of denying that half of the population is subhuman is considered hate speech.”

It’s odd to live in a world where the mere act of denying that half of the population is subhuman is considered hate speech. Ms. Streep, you are now forgiven for Sophie’s Choice.

AUTHOR: MARTIN LUTHER KING LAUGHED WHILE A FRIEND RAPED A WOMAN
An eternal problem with portraying people as saints is that it’s never true. Not only did Nelson Mandela have some terrifying skeletons in his closet, so did Martin Luther King, who, along with Jesus Christ, is the only person who has an American national holiday in their honor.

Author David Garrow won a Pulitzer Prize for his 1987 hagiography of MLK, Bearing the Cross. But now, after apparently being privy to notes regarding secret FBI recordings of King from a Washington, DC motel room in January 1964, he says that it may be time to reconsider MLK’s entire legacy.

The tapes accuse MLK of carrying on extramarital affairs with “40 to 45 women” and for joking that he was founder of the “International Association for the Advancement of Pussy-Eaters.” Most disturbing, though, is the allegation that during a discussion between King and Pastor Logan Kearse, they “discussed which women among the parishioners would be suitable for natural and unnatural sex acts.” Then, when “one of the women protested that she did not approve, the Baptist minister immediately and forcefully raped her.” It says that King “’looked on, laugh [sic] and offered advice” during the sexual assault.

Almighty God, please see to it that MLK suffers the #MeToo treatment.

FILM COMPANIES PONDER LEAVING GEORGIA DUE TO NEW ABORTION LAW
In early May, Georgia’s governor signed a bill that banned abortions as early as six weeks into pregnancy.

The abortion-crazy harpies in Hollywood, though, are grievously displeased and are threatening to cease filming in the state. Due to the fact that Georgia offers tax credits of up to 30 percent to film production companies, the Peach State is third only to New York and Los Angeles as a film-production hub, earning it the nickname “Y’allywood.”

So far entertainment-biz monoliths such as WarnerMedia, Sony Pictures, NBCUniversal, Sony Pictures Entertainment, and AMC Networks are threatening to cancel all further filming in the state that once voted Lester Maddox as its governor. Last year alone, the film industry allegedly brought over $9 billion in revenue and provided nearly 100,000 jobs in the state that still hasn’t burned down Wildman’s Civil War Surplus store.

Since abortions related to incest or rape are a mere one percent of the total, this seems like quite an overreaction on behalf of women who are either too stupid or too sloppy to consider that having unprotected intercourse can lead to pregnancy.

(a) Examples of anti-Semitism include:

1. Calling for, aiding, or justifying the killing or harming of Jews, often in the name of a radical ideology or an extremist view of religion.

2. Making mendacious, dehumanizing, demonizing, or stereotypical allegations about Jews as such or the power of Jews as a collective, especially, but not exclusively, the myth about a world Jewish conspiracy or of Jews controlling the media, economy, government or other societal institutions.

3. Accusing Jews as a people of being responsible for real or imagined wrongdoing committed by a single Jewish person or group, the State of Israel, or even for acts committed by non-Jews.

4. Accusing Jews as a people or the State of Israel of inventing or exaggerating the Holocaust.

5. Accusing Jewish citizens of being more loyal to Israel, or the alleged priorities of Jews worldwide, than to the interest of their own nations.

Clearly, anyone who suggests that Jews wield disproportionate power in this country is insane. Only powerless groups can push through legislation that forbids criticism of them.

NONWHITE WOMEN INVITE WHITE WOMEN TO ATTEND DINNERS WHERE THEY WILL BE VERBALLY ABUSED
Regina Jackson and Saira Rao are two Women of Color who have absolutely had it up to HERE with white women and their unearned privilege.

To make themselves feel better and white women feel worse about whiteness, they have started a program called “Race 2 Dinner” where white women attend dinner—and presumably pay for everyone—while the two colored ladies guilt-trip them into brokenness and, hopefully, a deep and everlasting bout of self-hatred:

Dear white women, you have caused immeasurable pain and damage to Brown and Black women. We are here to sit down with you to candidly explain how you caused this pain and damage.

We are not here to change anything. We are here to express the pain you have caused, white women. What you do after you leave the dinner is up to you. WE don’t care about your feelings. SIT WITH THAT FOR A MINUTE. Your feelings pale in comparison to the violence you have caused Black and Brown women.

Would it be wrong to wish that any white woman who shows up for this nonsense would choke to death on a chicken bone?

STUDY: THE CONCEPT OF “WHITE PRIVILEGE” MAKES PEOPLE FEEL LESS SYMPATHETIC TOWARD LOWER-CLASS WHITES
A new study published by the American Psychological Association says what we’ve been saying for years: The very concept of “white privilege” leads liberals to show no compassion for even the most poor and destitute white people living on barren hills in Appalachia because, hey, they’re white and privileged, so they must be fuckups who deserve their plight.

Test subjects were forced to read an essay about white privilege and then suggest at least two ways in which whites were privileged. Then they were told the story of someone named “Kevin” who was raised in New York City by a single mom and who felt he didn’t have the skills to get a job. Half of the subjects were told Kevin was white; the other half were told he was black.

According to study coauthor Erin Cooley:

What we found startling was that white privilege lessons didn’t increase liberals’ sympathy for poor Black people. Instead, these lessons decreased liberals’ sympathy for poor white people, which led them to blame white people more for their own poverty. They seemed to think that if a person is poor despite all the privileges of being white, there must really be something wrong with them.

Does their hypocrisy know no bounds? Just like modern progressives hate free-market capitalism and corporations unless those corporations are silencing right-wingers, they hate the idea of meritocracy unless it can be applied to destitute whites.